Mount Evans is the highest peak in the Mount Evans Wilderness in the Front Range of the Rocky Mountains of North America. The prominent 14,271-foot (4,350 m) fourteener is located 13.4 miles (21.6 km) southwest by south (bearing 214°) of Idaho Springs in Clear Creek County, Colorado, United States, on the drainage divide between Arapaho National Forest and Pike National Forest.

The peak is one of the characteristic Front Range peaks, dominating the western skyline of the Great Plains along with Pikes Peak, Longs Peak, and nearby Mount Bierstadt. Mount Evans can be seen from over 100 miles (160 km) to the east, and many miles in other directions. Mount Evans dominates the Denver metropolitan area skyline, rising over 9,000 feet (2,700 m) above the area. Mount Evans can be seen from points south of Castle Rock, up to (65 miles (105 km) south) and as far north as Fort Collins (95 miles (153 km) north), and from areas near Limon (105 miles (169 km) east). In the early days of Colorado tourism, Blue Sky and Denver were often in competition with Pikes Peak and Colorado Springs.

In March 2022, the Clear Creek County approved renaming the peak to Mount Blue Sky, to be submitted to State and Federal review, due to the negative associations of Territorial Governor John Evans with the Sand Creek Massacre. The new name was proposed by the Southern Cheyenne and Arapaho Tribes.

Mount Evans is the highest peak in a massif known historically as the Chicago Peaks. The peak is 35 miles (56 km) west of Denver, "as the crow flies", and approximately 51 miles (82 km) by road, via Idaho Springs. The other peaks in the massif are:

At least 7 deep glacial cirques cut into the Chicago Range. The cirques around Mount Evans are the deepest cirques in the Colorado Rockies. The bottoms of many of these contain tarns, the most notable being:

The Mount Evans Scenic Byway consists of State Highway 103 from Idaho Springs, Colorado on I-70 about 13 miles (21 km) to Echo Lake, and Colorado 5 from Echo Lake 15 miles (24 km), ending at a parking area and turnaround just below the summit. The latter has long been the highest paved road in North America and is only open in the summer. Colorado 103 continues east from Echo Lake to Squaw Pass, from which it connects, via Clear Creek County Road 103 and Jefferson County Road 66, to Bergen Park from which Colorado 74 leads to Evergreen Colorado.

A marked hiking trail roughly parallels the highway from Echo Lake to the summit, and a second marked trail links Guanella Pass to Mount Bierstadt. A difficult side route of the latter climbs to the northeastern peak of The Sawtooth, from which an easy ridge leads to the summit of Mount Evans. 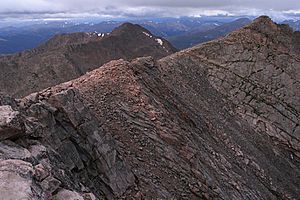 Looking west along ridge from summit

Mount Evans was originally known as Mount Rosa or Mount Rosalie. Albert Bierstadt named it for the wife of Fitz Hugh Ludlow, whom he later married. The name is also a reference to Monte Rosa, the highest peak in Switzerland. Bierstadt and his guide, William Newton Byers, approached the mountain along Chicago Creek from Idaho Springs in 1863, and spent several days painting sketches of the mountain from the Chicago Lakes before climbing to Summit Lake and onward to the summit. Bierstadt's sketch, Mountain Lake, accurately portrays the view of Mount Spalding over the Chicago Lakes. His painting, A Storm in the Rocky Mountains, Mt. Rosalie, is based on that and other sketches.

A second claim to be the first to ascend is attributed to Judge Lunt and a friend in 1872. William Henry Jackson, attached to the Hayden Survey, visited the Chicago Lakes in 1873, where he took numerous photographs; the summit of Mount Evans is barely visible in several of these, peeking over the col between upper Chicago Lake and Summit Lake. The Hayden survey reported that Mount Rosalie was 14,330 feet above sea level, measured by triangulation.

In 1895, 30 years after he was forced to resign as governor because of his part in the infamous Sand Creek Massacre and its subsequent cover-up, Colorado's legislature officially renamed the peak in honor of John Evans, second governor of the Colorado Territory from 1862 to 1865.

The history of the Mount Evans Scenic Byway is part of a larger story of the Denver Mountain Parks system. It ultimately began when the City and County of Denver initiated the construction of a series of automobile “scenic loops” to allow Denverites to explore the mountains. One road circuit, Circle G, was to traverse the ridge to Squaw Pass on to Echo Lake, culminate in a climb up Mt. Evans, and loop down to Idaho Springs. In order to achieve this goal, Denver Mountain Parks acquired a series of land parcels, including the acquisition of Bergen Park in 1915. The Bear Creek segment from the Genesee saddle to Bergen Park was finished in 1915, while the Denver Mountain Parks committee worked to make Mt. Evans a National Park, going as far as getting support in Congress for the construction of a “cement road” to the mountain. The first mile was paid for by Denver with the understanding that the State Highway Commission would do the rest. The Denver Mountain Parks committee was not without disagreement and setbacks, however. $30,000 was acquired early in 1916 to construct the Bergen Park to Squaw Pass segment and all seemed to be flowing towards the goal of Mount Evans when the mayor of Denver, Robert W. Speer, appointed W.F.R. Mills as the Commissioner of Improvements, who summarily stopped the construction of the road, stating that “It is a road that starts nowhere, ends nowhere, and never gets there”. After studying the issue, Mills later recanted and became a supporter of the park system, and the segment between Bergen Park and Squaw Pass was constructed beginning in the spring of 1918. The next act was to get Mount Evans classified as a National Park, but 1916 was a tumultuous time between the National Park system and the U.S. Forest Service, who currently held claim to the mountain. Already in bitter struggle to prevent the formation of a National Park Service, Chief Forester Graves adamantly blocked the relinquishment of this area of National Forest, in exchange for Forest Service development of the area including the immediate construction of a road between Squaw Pass and Echo Lake (Colorado). This joint exercise between the City and County of Denver, the U.S. Congress, the State Highway System, and now the Forest Service would be completed with help of a newly formed Federal Agency, the Bureau of Public Roads. In 1918, the Bureau of Public Roads provided the plan to construct 9.41 miles of road from Soda Pass (now called Squaw Pass) to Echo Lake beginning in 1919. By 1920, the road had only managed to be constructed to Chief Mountain. By October 1 of 1921, the Bureau of Public Roads had completed construction to Echo Lake. The first survey for the road from Echo Lake to the peak of Mount Evans was made in 1923, finishing the layout by January 1924 despite a flu outbreak in the camp, damaging windstorms, and nearly insurmountable environmental hardships. Battling the unusual problems that come with high-altitude construction (steam shovels performing only half as effective at high altitude, difficulty of hauling coal and water, etc.) the last 600 feet were finally built by hand, being completed in 1930.

The ruins of the Crest House (1941–1942) sit nearby. Once containing both a restaurant and a gift shop, it burned down on September 1, 1979 and was not rebuilt, but remains as a place of contemplation today. The rock foundation and walls remain as a windbreak for mountain travelers, and the viewing platform is one of Colorado's premier scenic overlooks.

Mount Evans was carved from the rock of the Mount Evans Batholith, formed by an intrusion of magma into the earth's crust about 1.4 billion years ago (in the Mesoproterozoic Era of the Precambrian Eon). Much of the rock is granodiorite, a close relative of granite, modified by later intrusions of quartz and pegmatite.

The body of this batholith has been deeply cut by glacial cirques and canyons. Each of the nearby lakes, Summit Lake, the Chicago Lakes, Lincoln Lake and Abyss Lake are tarns located in cirques or glacial canyons surrounding Mount Evans. Echo Lake was dammed by a lateral moraine of the glacier that formed Chicago Canyon. Prior to glaciation, Mount Evans, Long's Peak and several other summits were monadnocks in an upland Peneplain. Glaciation has not entirely destroyed the ancient Flattop Peneplain, named for Flattop Mountain in Grand County. The peaks of these mountains are all remnant features of this peneplain.

All content from Kiddle encyclopedia articles (including the article images and facts) can be freely used under Attribution-ShareAlike license, unless stated otherwise. Cite this article:
Mount Evans Facts for Kids. Kiddle Encyclopedia.