The impetus for the creation of the 11-hectare (26-acre) cemetery was the need for the provision of an Anglican burying ground for Quebec City's primarily English language speaking, Anglican community, in the mid–1800s.

The cemetery is located at the corner of Saint-Louis Road (French: chemin Saint-Louis) and côte de Sillery (formerly côte de l'Église), on 109,010 m2 (0.042 sq mi) of land overlooking the Saint Lawrence River, in the southeastern direction.

A memorial was dedicated to the victims of the sinking of the shipwrecked Empress of Ireland, in 1914, and other memorials were erected at later dates on the cemetery's grounds. The major loss of lives aboard the shipwrecked Empress of Ireland had significant impact upon Mount Hermon, along with its neighboring cemetery on chemin Saint-Louis: Saint-Patrick's Cemetery, which also relocated from the city of Quebec, in 1879. Both of the cemeteries took on responsibility for a significant number of the ship's passengers whom perished aboard or at sea.

Separately, on the Mount Hermon grounds is the Treggett Bell, which was presented in gratitude to the Treggett family, who had members from four different generations of its family serve as Mount Hermon's Superintendents, encompassing the years 1865–2014. 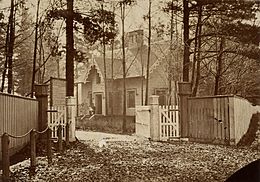 In the spring of 1847, a group of Protestant businessmen, shipbuilders, merchants, and clergy convened a public meeting to determine the possibility of buying land for a rural cemetery. Quebec City's original Anglican cemetery, located adjacent to Saint Matthew's Church on Saint John Street (French: rue Saint-Jean) had reached its capacity and city officials requested that a new Protestant cemetery be established outside of the city limits.

With aid from the lumber merchant John Gilmour, a prominent member of the local Protestant community, as well as a member of first municipal council of Sillery, the Quebec Protestant Cemetery Association was formed on February 11, 1848. Its first president was George O'Kill Stuart, Jr., and its main objective was to collect the funds necessary to purchase land and establish a cemetery on it. Other founding members included the philanthropist Jeffery Hale and the physician Dr. James Douglas, the later whom served as a member of the cemetery's first board of directors in 1848.

On June 14, 1848, Christopher Ferguson, 42-years of age, who was the master of the brig Transit, died of erysipelas. He became the first person to be buried in the nascent cemetery and the first person to be recorded in the cemetery's burial register. The only other details recorded were that he was a member of the Church of England and that the officiating clergyman was the Rev. J. Cornwall.

The membership of the association's first board of directors was noted for being an example of ecumenical cooperation in the overwhelmingly Roman Catholic majority city and province of Quebec. Between June 1848 and December 1883, out of 6,164 burials, close to half of the decedents were members of the Anglican Church (2,991), followed by members of the Presbyterian Church (1,117), and the Methodist Church (583).

"Design for proposed entrance lodge and gates for the grounds of the Quebec Cemetery," Edward Staveley, September 6, 1848, Quebec City

An American civil and military engineer, David Bates Douglass, designed the layout of Mount Hermon, in 1848. Douglass, who garnered acclamations for his 1838–1839 design of Green-Wood Cemetery, as a landscape of "bucolic serenity" in Brooklyn, New York, modeled both Albany Rural Cemetery (1845—1846), located on the outskirts of Albany, New York, and Mount Hermon Cemetery, after Green-Wood.

All three of Douglass' cemeteries were designed from the philosophical perspective of the architect Sir Christopher Wren, who in the year 1711, began to argue for cemeteries to be located in pastoral settings, away from crowded and disease-plagued cities. The three David Bates Douglass designed garden cemetery landscapes all have achieved historic and cultural landmark statuses: in addition to Mount Hermon's designation as a National Historic Site of Canada, his Green-Wood Cemetery was designated a United States National Historic Landmark in 2006, and his Albany Rural Cemetery was placed on the U.S. National Register of Historic Places in 1979.

Quebec City architect Edward Staveley (1795–1872) designed the cemetery's Gothic Revival entrance lodge and gates in a set of plans which were signed and dated on September 6, 1848, in the city of Quebec. On August 24, 1849, Staveley completed a design plan for a burial vault at Mount Hermon for the family of the Hon. Henry Black.

At the time of its establishment, Mount Hermon was the first cemetery to be located in a rural area, outside of Quebec City's legal jurisdiction, in addition to being Canada's first garden cemetery. On July 10, 1859, the Roman Catholic Notre-Dame-de-Belmont Cemetery (French: cimetière Notre-Dame-de-Belmont), located in the adjacent, historic area of Sainte-Foy, was blessed and its first burial took place two days later. This was the second garden cemetery to be created in a rural environment outside of the city limits of Quebec. 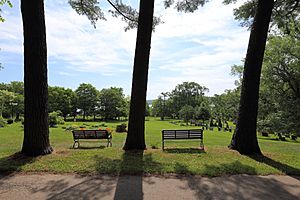 "Park-like space for public use"

On June 8, 2007, Mount Hermon Cemetery was officially recognized as a National Historic Site of Canada. Additionally, the cemetery is located on the Sillery Heritage Site, which was designated as a historic district in 1964. On April 24, 2009, Parks Canada listed Mount Hermon Cemetery on the Canadian Register of Historic Places (Canada's Historic Places), which it administers.

Amongst other attributes, the Historic Sites and Monuments Board of Canada noted the heritage value of the blending of art with nature, including Celtic crosses, neoclassical monuments, obelisks, globes, and the cemetery's Gothic-Revival style lodge, all in a layout that was "park-like space for public use." The site's multitude of tree species, winding pathways, and prominent viewpoints of the Saint Lawrence River were noted, as well.

In 2011, the Mount Hermon Cemetery Association undertook restoration work to the outside of the cemetery's entrance lodge, which contains the Superintendent's office and residence. The work included the replacement of the lodge's asphalt shingle roof with a cedar shingle one and the addition of a wood staircase for a secondary entrance, as well as restorative measures performed on the cemetery's mass grave (French: charnier) for the anonymous victims from the Empress of Ireland.

On November 5, 2015, the remains of 204 unknown people, originally buried at the Saint Matthew's Church graveyard on Saint John Street in Quebec City, were interred at Mount Hermon Cemetery. The skeletal remains were discovered by city archeologists while performing restoration work at the former location, during 1999–2000. The 204 individuals were buried at Saint Matthew's between 1772 and 1860.

A ceremony was held at Mount Hermon on September 8, 2016, to mark the 150th anniversary of Jeffery Hale Hospital (French: Hôpital Jeffery Hale). At the ceremony, new engravings on the Hale family monument, along with a bench, were unveiled.

The War Graves Photographic Project, a volunteer initiative which has recorded the graves or memorial listings of every Commonwealth service member death since World War I, has indexed the details regarding 170 servicemembers buried at Mount Hermon, including photographs of their headstones. Hard or digital copies of the photographs may be requested from the non-profit organization, along with a donation.

The Commonwealth War Graves Commission identified 68 individuals buried at Mount Hermon Cemetery whom it determined were casualties from World Wars I and II. Of those burials, 49 are of servicemembers whom were killed in active duty during the first World War; 14 from WWII, one of whom is an unidentified Canadian airman. In addition, there are three American war graves, as well as one interned Austrian civilian's grave. The Commonwealth burials located in Section G are buried in Plot 1368. 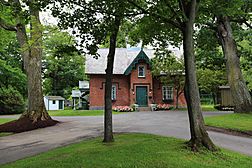 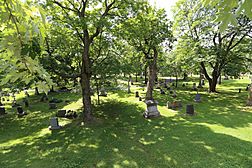 All content from Kiddle encyclopedia articles (including the article images and facts) can be freely used under Attribution-ShareAlike license, unless stated otherwise. Cite this article:
Mount Hermon Cemetery Facts for Kids. Kiddle Encyclopedia.