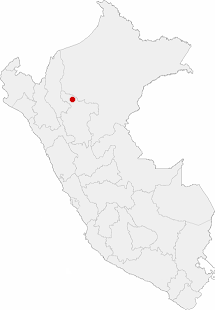 Moyobamba or Muyupampa (Quechua muyu circle, pampa large plain, "circle plain") is the capital city of the San Martín Region in northern Peru. Called "Santiago of eight valleys of Moyobamba" or "Maynas capital". There are 86 000 inhabitants, according to the 2007 census. Some 3,500 species of orchids are native to the area, which has led to the city's nickname of The City of Orchids. The city is the capital of both Moyobamba Province and Moyobamba District.

The city is linked by road with Tarapoto to the southeast, Rioja to the west and Bagua to the northwest. Roads connect Moyobamba to the Pacific coast by way of Bagua and Olmos to the north and Cajamarca to the southwest.

The first colonies were from the Chachapoyas culture, but the modern city of Moyobamba was established by Juan Pérez de Guevara on 25 July 1540, who named it Santiago de los Ocho Valles de Moyobamba (Santiago of the eight Moyobamba Valleys). It was founded on the site of an Inca settlement and was the first city founded by the Spanish in the Peruvian Amazon. It is the second oldest Spanish town east of the Andes.

During the Spanish Conquest, Moyobamba was a base from which incursions were made into the surrounding areas.

The city was the seat of the first religious missions established in the region. The Roman Catholic Church used the city as a base, where it began the task of converting the natives to Christianity. It was an important commercial center during the colonial era (1533–1821) and it was given city status in 1857. The historic "Puerto de Tahuishco" was once a vibrant port along the Mayo River, but has since become one of the last waning vestiges of the river trade route. 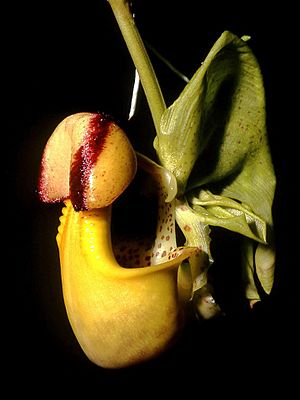 The city sits on a bluff overlooking the Mayo River, at 2,820 feet (860 m) above sea level, in the humid, tropical region known as the Ceja de selva.

Native Orchids are the most famous of the Moyobamba flora.

The surrounding area consists of rivers, caves, waterfalls, hot springs and lakes. These include the Tioyacu River and the subterranean river in the cave of the Huacharos (Cueva de los Huacharos), the natural hot springs at San Mateo, the Laguna Azul lake, the Ahuashiyacu and the Gera waterfalls.

The demographics of Moyobamba is a mix of cultures and people of different origins. The Caucasian group includes people from Spain and Italy with smaller groups of people from Armenia, Syria, Germany, and Poland and forms 70 percent of the population; the "mixed people" (amerindian with caucasian) form 25 percent of total population. The remaining 5 percent of the population includes Chinese, Japanese, Quechua and other amerindians (amazonian groups), and people of black origins.

One small group people, descendants of Armenians, Jews, and Germans have the higher education and economic rate in the city; many of their members emigrated from Moyobamba to other areas and are very active in politics, economy, trade and education in largest cities of Peru (like Lima, Trujillo, Arequipa, Ica and Chiclayo).

Moyobamba is the center of a large agricultural region and one of the major trading centers for the Aguaruna Native Communities which inhabit the surrounding valley known as the Upper Mayo River Valley. The most lucrative crops grown in the region include rice, coffee, and corn. Cotton, sugarcane, tobacco and cocoa are also produced.

Alcohol, liquor, wines, and straw hats are produced in the city.

Hot springs, gold, and some petroleum are found nearby.

After the slow demise of its airport, this regional capital began to fall behind the faster-developing Tarapoto, a neighboring city further down-river. Farmers and regional government workers often clash in a geopolitical battle over local control and access to outside markets.

All content from Kiddle encyclopedia articles (including the article images and facts) can be freely used under Attribution-ShareAlike license, unless stated otherwise. Cite this article:
Moyobamba Facts for Kids. Kiddle Encyclopedia.