Location of the Inca Empire 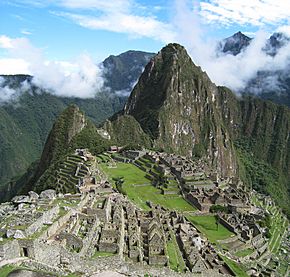 A view of Machu Picchu, "the Lost City of the Incas," now an archaeological site

The Inca were a pre-Columbian civilization and empire in the Andes of South America. The word Inca can also mean the emperor or king of the Inca people. It was the largest empire in the Americas, and was large even by world standards. It existed shortly before Christopher Columbus arrived in the Americas.

The Inca ruled along the western coast of South America for a little over 100 years, until the Spanish invasion in the 16th century. The empire was centred around the city of Cusco, or Qosqo, in what is now southern Peru. This was the administrative, political and military center of the empire. In later years, it was also centred around Quito. The Inca were ruled by an Emperor known as the Sapa Inca. Throughout their empire, they built many roads and bridges to make travel between their communities easy.

The Inca Empire was called Tawantinsuyo in Quechua, which means "four regions". The empire only lasted for about 100 years as the arrival of the conquering Spaniards in 1532 AD marked the end of their reign. Their main language was Quechua, but as the Empire was made up of many different groups there were probably many different languages as well.

The Inca Empire began around Lake Titicaca in about 1197. From 1438 to 1533, the Incas used conquest and non-violent assimilation to gain a large portion of western South America. Their empire centered on the Andean mountain ranges. It included large parts of what is now Ecuador, Peru, Bolivia, Argentina and Chile.

In 1533, Atahualpa, the last sovereign emperor, was executed by the conquistador Francisco Pizarro. That meant the beginning of Spanish rule in South America. The Inca Empire was supported by an economy based on the collective ownership of the land.

All content from Kiddle encyclopedia articles (including the article images and facts) can be freely used under Attribution-ShareAlike license, unless stated otherwise. Cite this article:
Inca Empire Facts for Kids. Kiddle Encyclopedia.