North Petherton is a small town and civil parish in Somerset, England, situated on the edge of the eastern foothills of the Quantocks, and close to the edge of the Somerset Levels. The town has a population of 6,730. The parish includes Hamp, Melcombe, Shearston, Woolmersdon and Huntworth.

Dating from at least the 10th century and an important settlement in Saxon times, North Petherton became a town only in the late 20th century, until then claiming to be the largest village in England.

A former market and administrative centre, North Petherton is now largely a dormitory town for workers in Bridgwater, 3 miles (5 km) to the north east, and Taunton, 8 miles (13 km) to the south west. The centre of the town is designated an Area of High Archaeological Potential (AHAP), and a number of buildings have been given listed building status.

The town is mentioned in the Domesday Book as Nortperet. The name derives from the area's location to the north side of the River Parrett, from the Latin Paradæ 'barge' and from the Old English nor tun.

At the time of the Norman invasion the Hundred covered a large area corresponding, today, roughly to a north–south corridor along the M5 motorway from Junction 25 near Taunton, to north of Junction 23 at Stretcholt, and east–west from Athelney to Goathurst. The Parish of North Petherton continues to be one of the largest in Somerset to this day.

The town itself it thought to have developed around the minster which, it is supposed, was on the same site as the current church. There is archaeological evidence indicating that there were timber buildings to the west of the church in the late Saxon period, and it is suspected that the remains of the Saxon settlement may continue to lie beneath the town centre. Excavations to the west of the church, on what is now the Community Centre site, revealed a 14th-century cemetery, which may have been used for victims of the plague, as well as indicating that the area was redeveloped in the late Middle Ages. It is thought that there may have been a mint in the town during the 10th or 11th century, and a charter to hold a market was granted in 1318, although it is thought that the market predated this. A shire hall, courthouse and guildhall are known to have exited and were probably located north of the church.

A minor skirmish of the English Civil War took place in August 1644 outside what was then the cornhill, now the area of Fore Street between the Community Centre and the former George Inn.

The Alfred Jewel, an object about 2.5-inch (64 mm) long, made of filigree gold, cloisonné-enamelled and with a rock crystal covering, was found in 1693 at Petherton Park, North Petherton. Believed to have been owned by Alfred the Great it is thought to have been the handle for a pointer that would have fit into the hole at its base and been used while reading a book. It is inscribed, "AELFRED MEC HEHT GEWYRCAN," ("Alfred had me made"). It may be one of the "aestels" Alfred had sent to each bishopric with a copy of his translation of Pope Gregory the Great's book Pastoral Care. A replica of the jewel can be found in the church of St Mary. 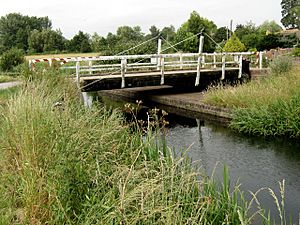 When the Bridgwater and Taunton Canal was opened in 1827 it joined the River Parrett by a lock at Huntworth, where a basin was constructed, but in 1841 the canal was extended to a floating harbour in Bridgwater, and the Huntworth link was filled in. The canal and river were not re-connected at this point when the canal was restored, because the Parrett is by then a salt water river laden with silt, whereas the canal contains fresh water. Not only is there a risk of silt entering the canal, but the salt water cannot be allowed to contaminate the fresh, as the canal is still used for the transport of drinking water for Bridgwater's population. The Crossways Swing Bridge over the canal in the parish was built in 1827 by John Rennie. It is a wooden bridge which rotates on steel ball-bearings in a circular track. It is now the only bridge retaining its mechanism and is a very early example of the use of ball bearings in this way. It has been designated as a Grade II listed building. The Higher and Lower Maunsel locks on the canal are either side of the Maunsel bridge which carries the A361. The stone Coxhill road bridge dates from the same time.

In 1926 the Bridgwater Beam Wireless Station was opened north east of the town. It was the UK receiving station for Marconi's UK-to-Canada Beam Wireless Service, (part of the Imperial Wireless Chain,) the first transoceanic shortwave wireless telegraph service in the world and operated until 2002.

In 1984 North Petherton was provided with a small public library. As a result of a revitalised fund-raising campaign (originally begun decades earlier), this was followed a few years later by the construction of a Community Centre, opened in 1987, which was extended in 1991.

North Petherton is situated on one of the historic communication routes through Somerset, and a turnpike through the town was opened between Bridgwater and Taunton in the 1730s. The opening of the nearby M5 motorway in the 1970s which relieved major traffic jams on the A38 through the town, also added to the attraction of the town for commuters and has consequently led to the construction of several new housing estates. The town lies on the route of the Macmillan Way West long-distance footpath. 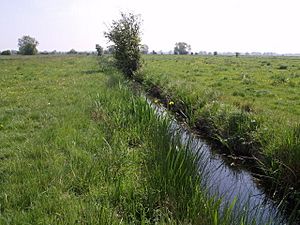 A drain on North Moor

South east of the town near Lyng, on the opposite side of the M5 motorway but within the parish is North Moor, a 676.3 hectare biological Site of Special Scientific Interest. North Moor is a nationally important grazing marsh and ditch system on the Somerset Levels and Moors. A range of neutral grassland types supporting common and scarce plants has developed mainly due to variations in soils and management practices. Aquatic plant communities are exceptionally diverse with good populations of nationally scarce species. The site has special interest in its bird life.

Along with the rest of South West England, North Petherton has a temperate climate which is generally wetter and milder than the rest of the country. The annual mean temperature is approximately 10 °C (50.0 °F). Seasonal temperature variation is less extreme than most of the United Kingdom because of the adjacent sea temperatures. The summer months of July and August are the warmest with mean daily maxima of approximately 21 °C (69.8 °F). In winter mean minimum temperatures of 1 °C (33.8 °F) or 2 °C (35.6 °F) are common. In the summer the Azores high pressure affects the south-west of England, however convective cloud sometimes forms inland, reducing the number of hours of sunshine. Annual sunshine rates are slightly less than the regional average of 1,600 hours. In December 1998 there were 20 days without sun recorded at Yeovilton. Most the rainfall in the south-west is caused by Atlantic depressions or by convection. Most of the rainfall in autumn and winter is caused by the Atlantic depressions, which is when they are most active. In summer, a large proportion of the rainfall is caused by sun heating the ground leading to convection and to showers and thunderstorms. Average rainfall is around 700 mm (28 in). About 8–15 days of snowfall is typical. November to March have the highest mean wind speeds, and June to August have the lightest winds. The predominant wind direction is from the south-west. 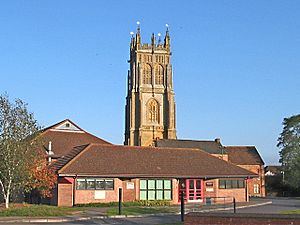 The community centre with St Mary's church tower behind

The town has the minster church of St Mary the Virgin, with a highly decorated tower which, at 120 feet (37 m) high, is claimed to be one of the tallest towers in the West Country. The building is mainly dated from the 15th century, with a minstrel gallery from 1623, a peal of six bells, and a clock built in Bridgwater in 1807. It has been designated by English Heritage as a grade I listed building. A specification of the organ can be found on the National Pipe Organ Register.

The Church of St Peter has a tower which may be of Saxon origin which was altered in 1635. The rest of the church was completely rebuilt for Rev. Thomas Eaton in 1885. It is Grade II* listed.

The Church of St. Michael has Norman origins and has seen various restorations since. It was last restored and extended in 1868 for Slade family of Maunsel House.

In the cemetery is a 19th-century combined Non-conformist and Anglican Mortuary Chapel.

The annual North Petherton Carnival is part of the West Country Carnival circuit, and takes place in November, on the Saturday after the first Thursday in November. The date of the first Carnival at Bridgwater is the preceding Saturday, featuring most of the same participants.

The Walnut Tree (rebranded in the 1970s from the Clarence Hotel, and before that as the New Inn) which now provides the only hotel accommodation in the town, was formerly in competition with the George Hotel (now closed), where monthly petty sessions (court hearings) were formerly held. 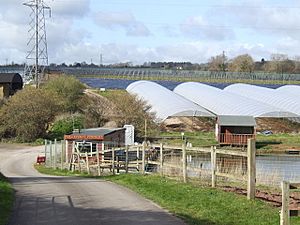 Follyfoot fishery by the A38 south of North Petherton

In the past the town hosted a Starkey Knight and Ford brewery on Fore Street (demolished in the late 1960s), several maltings, a light engineering works (Trig Engineering, since moved to the Huntworth Business Park adjacent to the nearby Junction 24 of the M5 motorway), and in earlier times at least 7 watermills.

Basket making and the manufacture of associated products including wicker furniture, was also a significant industry, at one time employing over 100 people in small factories and homes, until its decline in the second half of the 20th century. The products were distributed nationally via the railway station at Bridgwater. Nearby King's Cliff formerly provided a source of building stone for the town dating from at least Medieval times. The production of cloth and leather goods also used to take place in the town, the former being commemorated in the name of the road known as Dyer's Green.

The extensive cider orchards that used to surround much of the town in the 19th century had largely disappeared by the end of the 20th, by which time local employment was largely restricted to service businesses and farming. Folly Foot fishery is based on a lake which is stocked with Koi, Mirror, Common and Ghost Carp.

A new £100 m Regional Agricultural Business Centre, including an extensive Cattle Market and Dairy opened just beyond the outskirts of the town in 2007, following construction which began in 2006. This replaced the cattle markets in both Taunton and Bridgwater. 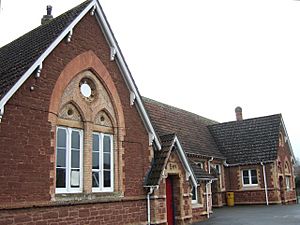 Further Education is provided by Bridgwater College which was formerly Bridgwater Technical School.

All content from Kiddle encyclopedia articles (including the article images and facts) can be freely used under Attribution-ShareAlike license, unless stated otherwise. Cite this article:
North Petherton Facts for Kids. Kiddle Encyclopedia.