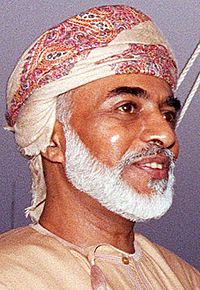 Qaboos bin Said Al Said (Arabic: قابوس بن سعيد آل سعيد‎; 18 November 1940 – 10 January 2020) was the Sultan of Oman from 1970 until his death in 2020. He was a fourteenth-generation descendant of the founder of the House of Al Said. He was the longest-serving leader in the Middle East and Arab world, serving for almost fifty years.

Qaboos died of colon cancer on 10 January 2020 in Muscat. He was 79. After he died, Haitham bin Tariq Al Said became the Sultan of Oman.

All content from Kiddle encyclopedia articles (including the article images and facts) can be freely used under Attribution-ShareAlike license, unless stated otherwise. Cite this article:
Qaboos bin Said Facts for Kids. Kiddle Encyclopedia.