The Legend of Zelda (series) facts for kids 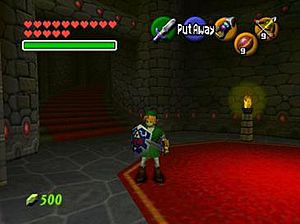 Ocarina of Time, the first 3D-styled game of the franchise

The Legend of Zelda is a series of video games. The games are usually about a boy called Link who has to rescue Princess Zelda from Ganon. The series was made by Shigeru Miyamoto and was first sold February 21, 1986 by Nintendo. Most of the games take place in the fictional country of Hyrule. The games all have fighting, journeying, item collecting, puzzle-solving, and sometimes jumping and racing parts. The Legend of Zelda series has sold 50 million games, with 13 different games in the series during 2007, making it the 6th best-selling video game series ever.

Right now there are 17 games in the main series.

Hyrule is a fictional world in The Legend of Zelda series. It is inhabited by many races, including Hylians, Gorons, Zoras, and others.

Long after the Link from The Legend of Zelda: Ocarina of Time disappeared, Ganon returned, and when Link did not come to save them, they asked the Goddesses to flood Hyrule. Hyrule was flooded, and many people died because of it. Hyrule was lost under the sea, and people lived on islands that are scattered around the Great Sea. The events of The Wind Waker take place many years after.

Termina is a land only in Majora's Mask that Link finds in the Lost Woods that he has to save before the moon crashes into it. It's an alternate land to Hyrule, and has many places and people that look or act like people from The Legend of Zelda: Ocarina of Time. The people who live in Termina are sometimes referred to as Terminans, or Terminan Hylians.

The Master Sword is a sword found in The Legend of Zelda series. Link uses it as a weapon.

Known as the Sword of Evil's Bane, the Master Sword is to only be held by a person destined to be the Hero of Time. Link in The Legend of Zelda: Ocarina of Time is supposedly the first holder of the Master Sword. The other Links are then given the right to wield the Master Sword because they are related to him.

All content from Kiddle encyclopedia articles (including the article images and facts) can be freely used under Attribution-ShareAlike license, unless stated otherwise. Cite this article:
The Legend of Zelda (series) Facts for Kids. Kiddle Encyclopedia.