An apple's side, stem end, and interior

The apple tree (Malus domestica) is a deciduous tree in the rose family best known for its sweet, pomaceous fruit, the apple. It is cultivated worldwide as a fruit tree, and is the most widely grown species in the genus Malus. The tree originated in Central Asia, where its wild ancestor, Malus sieversii, is still found today. Apples have been grown for thousands of years in Asia and Europe, and were brought to North America by European colonists. Apples have religious and mythological significance in many cultures, including Norse, Greek and European Christian traditions.

Apple trees are large if grown from seed, but small if grafted onto roots (rootstock). There are more than 7,500 known cultivars of apples, resulting in a range of desired characteristics. Different cultivars are bred for various tastes and uses, including cooking, eating raw and cider production. Apples are generally propagated by grafting, although wild apples grow readily from seed. Trees and fruit are prone to a number of fungal, bacterial and pest problems, which can be controlled by a number of organic and non-organic means. In 2010, the fruit's genome was sequenced as part of research on disease control and selective breeding in apple production.

Worldwide production of apples in 2013 was 80.8 million tonnes, with China accounting for 49% of the total. 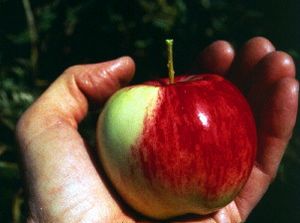 The apple has a small, leaf-shedding tree that grows up to 3 to 12 metres (9.8 to 39.4 ft) tall. The apple tree has a broad crown with thick twigs. The leaves are alternately arranged simple ovals. They are 5 to 12centimetres long and 3–6centimetres (1.2–2.4in) wide. It has a sharp top with a soft underside. Blossoms come out in spring at the same time that the leaves begin to bud. The flowers are white. They also have a slightly pink color. They are five petaled, and 2.5 to 3.5centimetres (0.98 to 1.4in) in diameter. The fruit matures in autumn. It is usually 5 to 9centimetres (2.0 to 3.5in) in diameter. There are five carpels arranged in a star in the middle of the fruit. Every carpel has one to three seeds.

The wild ancestor of apple trees is Malus sieversii. They grow wild in the mountains of Central Asia in the north of Kazakhstan, Kyrgyzstan, Tajikistan, and Xinjiang, China, and possibly also Malus sylvestris. Unlike domesticated apples, their leaves become red in autumn. They are being used recently to develop Malus domestica to grow in colder climates.

The apple tree was possibly the earliest tree to be cultivated. Its fruits have become better over thousands of years. It is said that Alexander the Great discovered dwarf apples in Asia Minor in 300 BC. Asia and Europe have used winter apples as an important food for thousands of years. From when Europeans arrived, Argentina and the United States have used apples as food as well. Apples were brought to North America in the 1600s. The first apple orchard on the North American continent was said to be near Boston in 1625. In the 1900s, costly fruit industries, where the apple was a very important species, began developing. 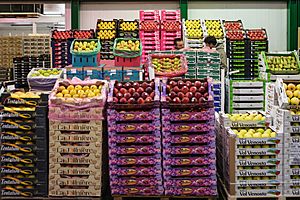 Different kinds of apple cultivars in a wholesale food market

If one wants to grow a certain type of apple it is not possible to do this by planting a seed from the wanted type. The seed will have DNA from the apple that the seeds came from, but it will also have DNA from the apple flower that pollinated the seeds, which may well be a different type. This means that the tree which would grow from planting would be a mixture of two. In order to grow a certain type of apple, a small twig, or 'scion', is cut from the tree that grows the type of apple desired, and then added on to a specially grown stump called a rootstock. The tree that grows will only create apples of the type needed.

There are more than 7,500 known cultivars of apples. Different cultivars are available for temperate and subtropical climates. One large collection of over 2,100 apple cultivars is at the National Fruit Collection in England. Most of these cultivars are grown for eating fresh (dessert apples). However, some are grown simply for cooking or making cider. Cider apples are usually too tart to eat immediately. However, they give cider a rich flavor that dessert apples cannot.

In the United Kingdom there are about 3000 different types of apples. The most common apple type grown in England is the 'Bramley seedling', which is a popular cooking apple.

Apple orchards are not as common as they were in the early 1900s, when apples were rarely brought in from other countries. 'Apple Day' is celebrated each October 21 in many countries.

Many apples are grown in temperate parts of the United States and Canada. In many areas where apple growing is important, people have huge celebrations: 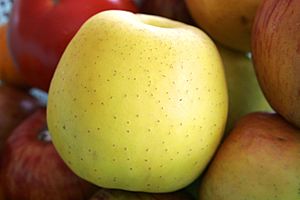 There are lots of different varieties of apples, including:

The whole fruit including the skin, except for the seeds, is suitable for human consumption. The core, containing the seeds, is usually not eaten and is discarded.

Apples can be consumed various ways: juice, raw in salads, baked in pies, cooked into sauces, and other baked dishes.

Several techniques are used to preserve apples and apple products. Apples can be canned, dried or frozen. Canned or frozen apples are eventually baked into pies or other cooked dishes. Apple juice or cider is also bottled. Apple juice is often concentrated and frozen.

Apples are an important ingredient in many desserts, such as apple pie, apple crumble, apple crisp and apple cake. When cooked, some apple cultivars easily form a puree known as apple sauce. Apples are also made into apple butter and apple jelly. They are often baked or stewed and are also (cooked) in some meat dishes. Dried apples can be eaten or reconstituted (soaked in water, alcohol or some other liquid).

Sliced apples turn brown with exposure to air due to the conversion of natural phenolic substances into melanin upon exposure to oxygen. Different cultivars vary in their propensity to brown after slicing and the genetically engineered Arctic Apples do not brown. Sliced fruit can be treated with acidulated water to prevent this effect.

The flesh of the fruit is firm with a taste anywhere from sour to sweet. Apples used for cooking are sour, and need to be cooked with sugar, while other apples are sweet, and do not need cooking. There are some seeds at the core, that can be removed with a tool that removes the core, or by carefully using a knife.

Most apples are good to eat raw (not cooked), and are also used in many kinds of baked foods, such as apple pie. Apples are cooked until they are soft to make apple sauce.

All content from Kiddle encyclopedia articles (including the article images and facts) can be freely used under Attribution-ShareAlike license, unless stated otherwise. Cite this article:
Apple Facts for Kids. Kiddle Encyclopedia.