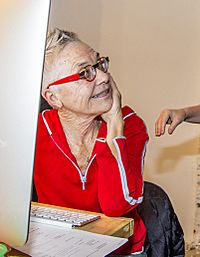 Barbara Jean Hammer (May 15, 1939 – March 16, 2019) was an American feminist movie director. She was known for directing movies about lesbian culture career for over 40 years. Her best known works were Nitrate Kisses and Tender Fictions. Hammer was born in Los Angeles, California.

Hammer was diagnosed with ovarian cancer in 2006. She was an activist for self-euthanasia. Hammer died from the disease on March 16, 2019 in New York City, aged 79.

All content from Kiddle encyclopedia articles (including the article images and facts) can be freely used under Attribution-ShareAlike license, unless stated otherwise. Cite this article:
Barbara Hammer Facts for Kids. Kiddle Encyclopedia.