Caboolture /kəˈbʊltʃər/ is an urban centre or satellite city approximately 44 kilometres (27 mi) north of Brisbane, the state capital of Queensland, Australia. Caboolture is considered to be the northernmost urban area of the greater Brisbane metropolitan region within South East Queensland, and it marks the end of the Brisbane suburban commuter railway service along the North Coast railway line. At the 2011 census, Caboolture had an estimated population of 59,052.

It hosts an annual country music festival and a ute muster each year, called the Urban Country Music Festival.

The Kabi indigenous people are the traditional custodians of the area now known as Caboolture. The name Kabultur is derived from the Yugarabul dialect meaning "place of the carpet snake". The Kabi people harvested bush food, fresh water mussels, oysters, fish, and some game animals, moving around the land to take best advantage of seasonally-available produce.

Each year in March, the Kabi people would hold Bunya Festivals to feast on the plentiful and nutritious annual nuts of the Bunya Pine. These huge trees provided a food source which could sustain large numbers of people. Neighbouring clans were invited to the festivals, where singing, dancing story-telling, trading and arranging of marriages took place.

The Caboolture area was colonised by European people in 1842 when the land around the Moreton Bay penal colony was opened up to free settlers.

By the mid-1860s the local pastoralists were experimenting with sugar cane and cotton. In 1867, a tiny settlement was established as a supply and trading centre for the settlers in the area and to service the needs of miners trekking from Brisbane to the goldfields near Gympie The local shire was constituted in 1879 and in 1888 the railway line from Brisbane was opened.

Settlement in Caboolture was accelerated with the discovery of gold at Gympie. In 1868, the town was used as a stop-over point by the Cobb and Co coach service connecting Brisbane, Gympie and Maryborough. This function continued with the rail link established in 1888.

Formerly a small dairy town, the location of Caboolture on the corridor between Brisbane and the Sunshine Coast resulted in an influx of residents in the 1970s and 1980s.

Caboolture has a number of heritage-listed sites, including:

The urban extent of Caboolture has never been legislatively defined, and at the 2001 census, its Urban Centre/Locality was abolished and merged into Brisbane. Today, its former area roughly corresponds to the Caboolture Central and Morayfield SLAs, which include the following suburbs: 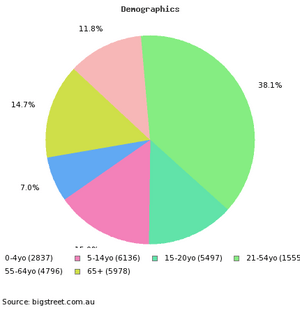 75.3% of people living in Caboolture were born in Australia. The other top responses for country of birth were New Zealand 4.1%, England 3.7%. 86.2% of people spoke only English at home.

Caboolture is a regional transport hub. With its connections across the Great Dividing Range via the D'Aguilar Highway, easy highway access to Brisbane and the Sunshine Coast via the Bruce Highway, and the Bribie Island Road to Bribie Island, it is a focal point for road traffic.

Caboolture also contains its own airfield, which primarily services general and recreational aviation. Visiting aircraft are able to operate into the Caboolture airstrip, which is under the operational control of the Caboolture Aero Club Inc. Additionally the airport is home to a number of aviation enterprises and attractions - amongst them, the Caboolture Warplane Museum (with operational P-51 Mustang, CAC Wirraway and CAC Winjeel aircraft), skydiving club, and the Beaufort Restoration group (a group of volunteers restorating an Australian-built DAP Beaufort Mark VII Bomber).

All content from Kiddle encyclopedia articles (including the article images and facts) can be freely used under Attribution-ShareAlike license, unless stated otherwise. Cite this article:
Caboolture, Queensland Facts for Kids. Kiddle Encyclopedia.