Kids Encyclopedia Facts
(Redirected from Dartmouth, England)
This page is about the town in Devon, England. For other places named Dartmouth, see Dartmouth (disambiguation).

Dartmouth is a town and civil parish in the English county of Devon. It is a tourist destination set on the western bank of the estuary of the River Dart, which is a long narrow tidal ria that runs inland as far as Totnes. It lies within the South Devon Area of Outstanding Natural Beauty and South Hams District, and had a population of 5,512 in 2001, reducing to 5,064 at the 2011 census There are two electoral wards in the Dartmouth area (Townstal & Kingswear). Their combined population at the above census was 6,822.

Dartmouth was of strategic importance as a deep-water port for sailing vessels. The port was used as the sailing point for the Crusades of 1147 and 1190, and Warfleet Creek, close to Dartmouth Castle is supposed by some to be named for the vast fleets which assembled there. Dartmouth was a home of the Royal Navy from the reign of Edward III and was twice surprised and sacked during the Hundred Years' War, after which the mouth of the estuary was closed every night with a great chain. The narrow mouth of the Dart is protected by two fortified castles, Dartmouth Castle and Kingswear Castle. Originally Dartmouth's only wharf was Bayard's Cove, a relatively small area protected by a fort at the southern end of the town.

A schipman was ther, wonyng fer by weste;
For ought I wost, he was of Dertemouthe.

Notwithstanding Dartmouth's connections with the crown and respectable society, it was a major base for privateering in medieval times. John Hawley or Hauley, a licensed privateer and sometime mayor of Dartmouth is reputed to be a model for Chaucer's "schipman".

The earliest street in Dartmouth to be recorded by name (in the 13th century) is Smith Street. Several of the houses on the street are originally late 16th century or early 17th century and probably rebuilt on the site of earlier medieval dwellings. The street name undoubtedly derives from the smiths and shipwrights who built and repaired ships here when the tidal waters reached as far as this point. Smith Street was also the site of the town pillory in medieval times. 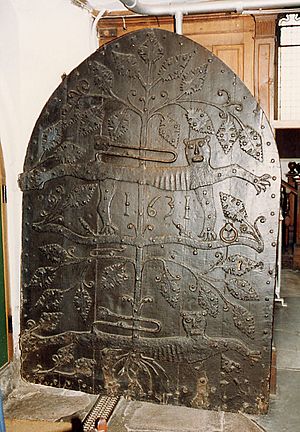 St Saviour's Church was constructed in 1335 and consecrated in 1372. It contains a pre-Reformation oak rood screen built in 1480 and several monuments including the tomb of John Hawley (d. 1408) and his two wives, covered with a large brass plate effigy of all three. A large medieval ironwork door is decorated with two leopards of the Plantagenets and is possibly the original portal. Although it is dated "1631", this is thought to be the date of a subsequent refurbishment coincidental with major renovations of the church in the 17th century. The gallery of the church is decorated with the heraldic crests of prominent local families and is reputed to be constructed of timbers from ships captured during the defeat of the Spanish Armada, although this has not been categorically substantiated.

In 1592 the Madre de Deus, a Portuguese treasure ship captured by the English in the Azores, docked at Dartmouth Harbour. It attracted all manner of traders, dealers, cutpurses and thieves and by the time Sir Walter Raleigh arrived to reclaim the Crown's share of the loot, a cargo estimated at half a million pounds had been reduced to £140,000. Still, ten freighters were needed to carry the treasure to London.

Henry Hudson put in to Dartmouth on his return from North America, and was arrested for sailing under a foreign flag. The Pilgrim Fathers put in to Dartmouth's Bayard's Cove, en route from Southampton to America. They rested a while before setting off on their journey in the Mayflower and the Speedwell on 20 August 1620. About 300 miles west of Land's End, upon realising that the Speedwell was unseaworthy, it returned to Plymouth. The Mayflower departed alone to complete the crossing to Cape Cod. Dartmouth's sister city is Dartmouth, Massachusetts. 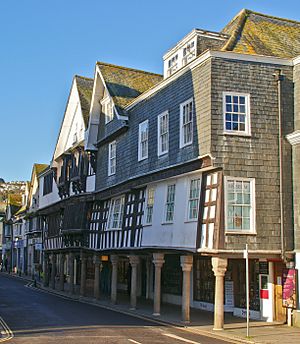 The town contains many medieval and Elizabethan streetscapes and is a patchwork of narrow lanes and stone stairways. A significant number of the historic buildings are listed. One of the most obvious is the Butterwalk, built 1635 to 1640. Its intricately carved wooden fascia is supported on granite columns. Charles II held court in the Butterwalk whilst sheltering from storms in 1671 in a room which now forms part of Dartmouth Museum. Much of the interior survives from that time.

The Royal Castle Hotel was built in 1639 on the then new quay. The building was re-fronted in the 19th century, and as the new frontage is itself listed, it is not possible to see the original which lies beneath. A claimant for the oldest building is a former merchant's house in Higher Street, now a Good Beer Guide listed public house called the Cherub, built circa 1380. Agincourt House (next to the Lower Ferry) is also 14th century.

Dartmouth sent numerous ships to join the English fleet that attacked the Spanish Armada, including the Roebuck, Crescent and Hart. The Nuestra Señora del Rosario, the Spanish Armada's "payship" commanded by Admiral Pedro de Valdés, was captured along with all its crew by Sir Francis Drake. It was reportedly anchored in the River Dart for more than a year and the crew were used as labourers on the nearby Greenway Estate which was the home of Sir Humphrey Gilbert and his half-brother Sir Walter Raleigh. Greenway was later the home of Dame Agatha Christie.

The remains of a fort at Gallants Bower just outside the town are some of the best preserved remains of a Civil War defensive structure. The fort was built by Royalist occupation forces in c. 1643 to the south east of the town, with a similar fort at Mount Ridley on the opposite slopes of what is now Kingswear. The Parliamentarian General Fairfax attacked from the north in 1646, taking the town and forcing the Royalists to surrender, after which Gallants Bower was demolished.

The made-up embankment which today extends the whole length of the town's riverbank is the result of 19th century land reclamation, started in earnest when the town played host to a large number of prisoners of war from the Napoleonic Wars which formed a captive workforce. Before this, what is now the town centre was almost entirely tidal mud flats.

The Royal National Lifeboat Institution opened the Dart Lifeboat Station at the Sand Quay in 1878, but it was closed in 1896. In all this time only one effective rescue was made by the lifeboat. 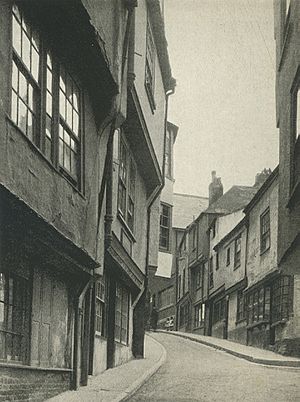 In the latter part of the Second World War the town was a base for American forces and one of the departure points for Utah Beach in the D Day landings. Slipways and harbour improvements were also constructed. Much of the surrounding countryside and notably Slapton Sands was closed to the public while it was used by US troops for practise landings and manoeuvres.

Dart Lifeboat Station was reopened in 2007, the first time that a lifeboat had been stationed in the town since 1896. It has initially been kept in a temporary building in Coronation Park.

In 2010, a fire seriously damaged numerous historical properties in Fairfax Place and Higher Street. Several were Tudor and Grade I or Grade II listed buildings. 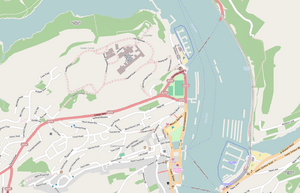 The Port of Dartmouth Royal Regatta takes place annually over three days at the end of August. The event sees the traditional regatta boat races along with markets, fun fairs, community games, air displays including the Red Arrows and fireworks. A Royal Navy guard ship is present at the event.

Bayard's Cove has been used in several television productions, including The Onedin Line a popular BBC television drama series that ran from 1971 to 1980. Many of the scenes from the BBC's popular series 'Down to Earth', starring Ricky Tomlinson, were filmed at various locations around the town.

Notable tourist attractions include the Dartmouth Royal Naval College, Dartmouth Castle and the Dartmouth Steam Railway which terminates at Kingswear on the opposite bank of the river.

Boat cruises to nearby places along the coast (such as Torbay and Salcombe) and up the river (to Totnes, Dittisham and the Greenway Estate) are provided by several companies. The paddlesteamer PS Kingswear Castle returned to the town in 2013.

The nearest Met Office weather station is Slapton, about 5 miles south-south west of Dartmouth and a similar distance from the coast. As with the rest of the British Isles and South West England, the area experiences a maritime climate with warm summers and mild winters - this is particularly pronounced due to its position near the coast - extremes range from a record low of just −8.0 °C (17.6 °F) in January 1987 up to a record high of 30.5 °C (86.9 °F) during June 1976.

Dartmouth is linked to Kingswear, on the other side of the River Dart, by three ferries. The Higher Ferry and the Lower Ferry are both vehicular ferries. The Passenger Ferry, as its name suggests, carries only passengers, principally to connect with the Paignton and Dartmouth Steam Railway at Kingswear railway station. The nearest bridge across the Dart is in Totnes, some 11 miles (18 km) away by road. 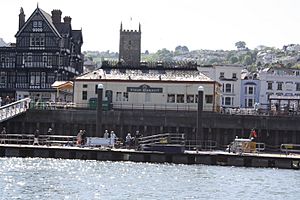 The A379 road runs through Dartmouth, linking the town to Slapton and Kingsbridge to the southwest and to Torbay to the east across the Higher Ferry. The A3122 connects Dartmouth to a junction with the A381, and hence to both Totnes and a more direct route to Kingsbridge. First South West provides local town bus services and links to, Plymouth, Kingsbridge. As well as Stagecoach Gold provides a luxury bus service to Torquay via Totnes and Paignton. In addition Stagecoach Devon provides links to the Torbay resorts of Brixham, Paignton and Torquay from Kingswear via the ferry.

No railway has ever run to Dartmouth, but the town does have a railway station, although it is now a restaurant. The railway line to Kingswear was opened in 1864, the original plans for the Dartmouth and Torbay Railway line took the line across a bridge and into the town. Opposition from local seamen and merchants saw the route diverted to Kingswear on the opposite side of the river, but this occurred after the station had been built at Dartmouth. The railway terminated at a station called "Kingswear for Dartmouth" (now on the Paignton and Dartmouth Steam Railway) and a ferry took passengers across the river to the station at Dartmouth railway station, which had a dedicated pontoon. British Railways closed the line to mainline passenger trains in 1973, but it re-opened as a heritage line and has run as one ever since. 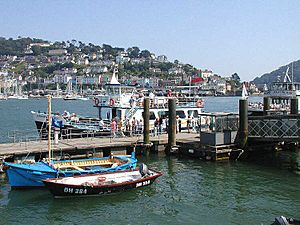 Dartmouth has a Non-League football club Dartmouth A.F.C. who play at Long Cross.

At the end of August and early September there is the annual Port of Dartmouth Royal Regatta.

Since 1905 Dartmouth has had a greenhouse as part of the Royal Avenue Gardens. In May 2013 this building, used for the previous 10 years by Dartmouth in Bloom, a not-for-profit organisation affiliated with Britain in Bloom, was closed as structurally unsound. There are proposals to restore the greenhouse to its prior Edwardian style.

All content from Kiddle encyclopedia articles (including the article images and facts) can be freely used under Attribution-ShareAlike license, unless stated otherwise. Cite this article:
Dartmouth, Devon Facts for Kids. Kiddle Encyclopedia.