Kids Encyclopedia Facts
Not to be confused with Doniphan, Kansas.

Doniphan County (county code DP) is a county located in the U.S. state of Kansas. As of the 2010 census, the county population was 7,945. Its county seat is Troy, and its most populous city is Wathena.

In 1854, the Kansas Territory was organized, then in 1861 Kansas became the 34th U.S. state. Doniphan County was established on August 25, 1855, then organized on September 18, 1855. It is named for the U.S. cavalry commander Colonel Alexander W. Doniphan (1808–1887) of Liberty, Missouri, who played an important part in the Mexican-American War. He was a zealous partisan in the failed effort made to extend slavery into Kansas.

Doniphan County is located in the northeastern corner of the state—it is bordered by Nebraska to the north and Missouri to the east. According to the U.S. Census Bureau, the county has a total area of 398 square miles (1,030 km2), of which 393 square miles (1,020 km2) is land and 4.9 square miles (13 km2) (1.2%) is water. It is the third-smallest county in Kansas by land area and second-smallest by total area.

The Missouri River defines the border in the north and east. Eight barge lines travel the river, and a Port Authority is located across the river in Saint Joseph, Missouri. The river provides much of the water for the eastern part of the county. Interior cities, such as Troy and Highland, receive their water from underground wells. The Wolf River flows through western portions of the county and north into the Missouri River. 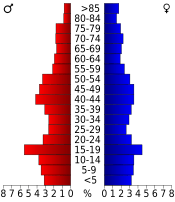 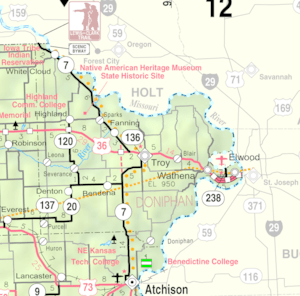 Doniphan County is divided into nine mostly rural townships. The three townships with the greatest population lie along U.S. Highway 36. None of the cities within the county are considered governmentally independent, and all figures for the township include those of the cities. In the following table, the population center is the largest city (or cities) included in that township's population total, if it is of a significant size.

All content from Kiddle encyclopedia articles (including the article images and facts) can be freely used under Attribution-ShareAlike license, unless stated otherwise. Cite this article:
Doniphan County, Kansas Facts for Kids. Kiddle Encyclopedia.