Dublin is a town in Cheshire County, New Hampshire, United States. The population was 1,532 at the 2020 census. It is home to Dublin School and Yankee magazine. 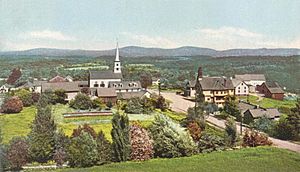 In 1749, the Masonian proprietors granted the town as Monadnock No. 3 (or North Monadnock) to Matthew Thornton and 39 others. But the French and Indian War thwarted permanent settlement until the 1760s, when Henry Strongman moved from Peterborough. Other early settlers arrived from Sherborn, Massachusetts. In 1771, Governor John Wentworth incorporated the town, naming it after Strongman's birthplace: Dublin, Ireland.

Like all towns in this area, the terrain features hills and valleys. Farmers found the soil hard and rocky, but with effort it yielded maize, oats, barley and potatoes, with some wheat and rye. Orchards were common. The first census, taken in 1790, reported 901 residents. By 1859, there were 1,088. Then in 1870, the small mill town of Harrisville voted to separate from Dublin, leaving the latter with only 455 residents during the 1880 census.

According to the United States Census Bureau, the town has a total area of 29.1 square miles (75 km2), of which 28.0 sq mi (73 km2) is land and 1.1 sq mi (2.8 km2) is water, comprising 3.78% of the town. The northern slopes of Mount Monadnock occupy the southern part of town. The highest point in Dublin is along Monadnock's northeast ridge, where the elevation reaches 2,834 feet (864 m) above sea level at the town line. Roughly the western half of Dublin lies within the Connecticut River watershed, drained by tributaries of the Ashuelot River, with the eastern half located in the Merrimack River watershed, drained by tributaries of the Contoocook River.

There were 560 households, of which 32.5% had children under the age of 18 living with them, 65.4% were married couples living together, 6.6% had a female householder with no husband present, and 25.4% were non-families. 21.1% of all households were made up of individuals, and 6.6% had someone living alone who was 65 years of age or older. The average household size was 2.51 and the average family size was 2.89.

Dublin is the base for Yankee Publishing Inc., the publisher of the Old Farmer's Almanac and Yankee magazine.

All content from Kiddle encyclopedia articles (including the article images and facts) can be freely used under Attribution-ShareAlike license, unless stated otherwise. Cite this article:
Dublin, New Hampshire Facts for Kids. Kiddle Encyclopedia.