James I of England facts for kids

His reign was important because it was the first time England and Scotland agreed to have the same monarch. He was the first monarch of England from the House of Stuart. The previous English monarch had been Elizabeth I. She had died without any children, so the English agreed to have a Scottish monarch because James was the son of Mary, Queen of Scots, thus the closest relative Elizabeth had. By being king of both, he created a personal union.

James was the son of Mary, Queen of Scots, and a great-great-grandson of Henry VII, King of England and Lord of Ireland, positioning him to eventually accede to all three thrones. After the Union of the Crowns, he based himself in England (the largest of the three realms) from 1603, only returning to Scotland once in 1617, and styled himself "King of Great Britain and Ireland". He was a major advocate of a single parliament for England and Scotland. In his reign, the Plantation of Ulster and British colonisation of the Americas began.

At 57 years and 246 days, James's reign in Scotland was longer than those of any of his predecessors. He achieved most of his aims in Scotland but faced great difficulties in England, including the Gunpowder Plot in 1605 and repeated conflicts with the English Parliament.

Under James, the "Golden Age" of Elizabethan literature and drama continued, with writers such as William Shakespeare, John Donne, Ben Jonson, and Sir Francis Bacon contributing to a growing literary culture. James himself was also a talented scholar. He sponsored the translation of the Bible into English that would later be named after him: the Authorised King James Version.

Since the latter half of the 20th century, historians have spoke of James's reputation and treat him as a serious and thoughtful monarch. He was strongly committed to a peace policy, and tried to avoid involvement in religious wars, especially the Thirty Years' War (1618–1648) that devastated much of Central Europe. 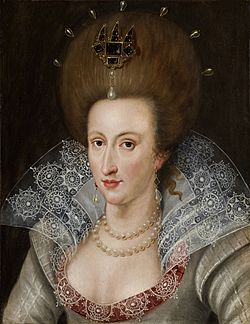 A suitable marriage was necessary to reinforce his monarchy, and the choice fell on Anne of Denmark, younger daughter of Protestant Frederick II. The couple were married formally at the Bishop's Palace in Oslo on 23 November and returned to Scotland on 1 May 1590. The royal couple produced three children who survived to adulthood: Henry Frederick, Prince of Wales, who died of typhoid fever in 1612, aged 18; Elizabeth and Charles, his successor. Anne died before her husband in March 1619.

After about the age of fifty, James suffered increasingly from arthritis, gout and kidney stones. The King was often seriously ill during the last year of his life, leaving him rarely able to visit London.

In early 1625, James fell seriously ill in March and died at Theobalds House on 27 March. James's funeral on 7 May was a magnificent affair. James was buried in Westminster Abbey. The position of the tomb was lost for many years until his lead coffin was found in the Henry VII vault in the 19th century, during an excavation.

All content from Kiddle encyclopedia articles (including the article images and facts) can be freely used under Attribution-ShareAlike license, unless stated otherwise. Cite this article:
James I of England Facts for Kids. Kiddle Encyclopedia.