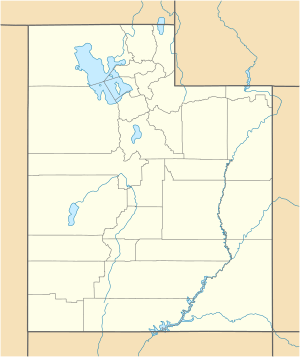 Map of State Parks of Utah
Hold cursor over locations to display park name;
click to go to park article.

Utah's state park system began with four heritage parks in 1957: Sugar House Park (which was later removed from the system), Utah Territorial Statehouse in Fillmore, This Is the Place Monument in Salt Lake City, and Camp Floyd outside of Lehi. Today, there are 43 Utah State Parks and several undeveloped areas totaling over 95,000 acres (380 km2) of land and more than one million surface acres of water. Utah's state parks are scattered throughout Utah; from Bear Lake State Park at the Utah/Idaho border to Edge of the Cedars State Park Museum deep in the Four Corners region, and everywhere in between.

The Division of Utah State Parks and Recreation also administers the Utah off highway vehicle, boating, and trails programs. In this capacity, they work to provide access to waterways and trails, and promote education, safety, and resource protection.

The division's mission statement is "To enhance the quality of life by preserving and providing natural, cultural, and recreational resources for the enjoyment, education, and inspiration of this and future generations."

All content from Kiddle encyclopedia articles (including the article images and facts) can be freely used under Attribution-ShareAlike license, unless stated otherwise. Cite this article:
List of Utah State Parks Facts for Kids. Kiddle Encyclopedia.