Mission Peak Regional Preserve is a public park east of Fremont, California, operated by the East Bay Regional Park District. It is the northern summit on a ridge that includes Mount Allison and Monument Peak. Mission Peak has symbolic importance, and is depicted on the logo of the City of Fremont. 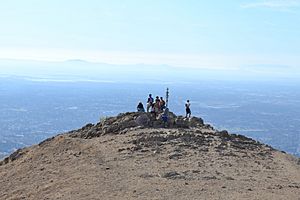 The summit of Mission Peak with the San Francisco Peninsula in the background, the Sutro Tower directly above the iconic summit marker nicknamed "Mission Peeker" and Mount Tamalpais at the upper right 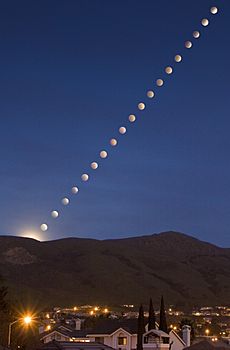 This park borders and overlooks Silicon Valley, and is popular with local hikers, bicyclists, sightseers from the Bay Area, and tourists from beyond for its vista and strenuous climb. The "Mission Peeker" marker pole at the summit is the most famous and geo-tagged landmark in the City of Fremont: a stream of sightseers takes photographs alongside the landmark. The Stanford Avenue entrance receives up to two thousand visitors per day on weekends. Visitor numbers surged after 2010, and it is the most popular attraction in Fremont.

A full six-mile (10 km) round-trip ascent on a popular trail takes two to five hours for walkers, one to one-and-a-half hours for bicyclists and runners. Difficulty with the midday sun, such as dehydration, is common. Guidelines recommend carrying two liters of water per person, extra water for dogs, and sun protection. Signs prohibit off-trail shortcuts which can cause erosion, and some shortcuts have barbed wire fencing to reduce trespassing.

Three trails climb the mountain's northern and western faces. The Hidden Valley Trail which draws the lion's share of visitors and the Peak Meadow Trail both ascend the western face from Stanford Avenue. They have an elevation change of 2,100 ft (640 m), with panoramic views of the Bay Area but are sun exposed with little shade. The Stanford Avenue entrance has water and restrooms. No food, water bottles or supplies are sold at the park. The Park District is directing visitors to the Mission Peak Trail which starts at Ohlone College. This has an elevation change of 2,100 ft (640 m), and is 10% longer than the Hidden Valley Trail. The Peak Trail (Ohlone College) entrance has restrooms and a water fountain.

Paid parking at Ohlone College is not congested, nor are the miles-long pedestrian trails inside the park proper. Most access the park from one of two nearby freeways, 680 and 880. The Warm Springs BART station (part of the Silicon Valley BART extension), and AC Transit buses offer service to Ohlone College and the intersection of Mission Blvd.

The two least popular approaches originate from Sunol Regional Wilderness and Ed R. Levin County Park in Milpitas. The Sunol route climbs 2,200 ft (670 m) over five miles (8 km), a gentler grade than Hidden Valley Trail which climbs 2,100 ft (640 m) over three miles (5 km). The Levin County Park route first climbs 2,200 ft (670 m) from the Park HQ to Monument Peak over three miles (5 km), and from there Mission Peak is another three miles (5 km) to the north along a mostly flat trail. This route passes beside Mount Allison, the tallest of the three peaks. Mount Allison is about 170 ft (52 m) higher than Mission Peak, but not open to the public. Monument Peak is 2,594 ft (791 m).

Mission Peak connects to a network of regional trails and contains part of the Bay Area Ridge Trail, which is under construction and has gaps to the north of Mission Peak. The Eagle Spring Backpack campsite is just east of the summit.

The sculptor's purpose was to promote environmental awareness. The sticks on the pole represent each pillar of environmental recycling. Sealed inside the steel tube are a crystal with traditional cultural uses, an Ohlone charmstone replica, a bottle of 1990 zinfandel wine whose yeast overshoot represents world population trends, and five time capsules with articles and photographs. The time capsules were intended to be opened in a century or more, after 2090, and focus on rainforest preservation, AIDS, and homelessness. They offer images from popular culture of Bart Simpson, Teenage Mutant Ninja Turtles, and Gary Larson's Far Side cartoons.

The cultural meaning of monuments often change, and the use of this artifact has evolved over a quarter century. Though designed in 1988 as an "interpretive post", with sight tubes pointing to other Bay Area landmarks and cities, the "peeker" function has since been rendered archaic and its environmental message is not widely known.

The marker now functions as a standalone cultural monument, and draws thousands of weekly sightseers and tourists that make it the most photographed artifact in southern Alameda County and the top tourist attraction in Fremont. Snapchat has a geofilter image of the pole representing Fremont.

The pole has become a contested cultural symbol. In 2014, iconoclastic local residents, the Recreation Department of the City of Fremont and the Stewardship Division of EBRPD discussed razing the landmark to dissuade sightseers. 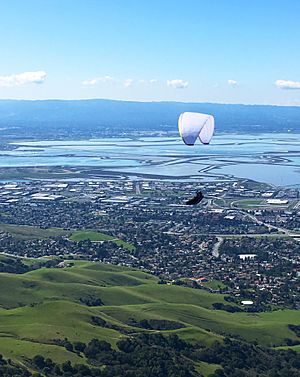 A paraglider viewed from a Mission Peak Vista, late winter 2017.

Mission Peak Regional Preserve is a popular location for hang gliding and paragliding.

The Wings of Rogallo Northern California Hang Gliding Association Inc. has been licensed by the East Bay Regional Park District (EBRPD) to administer hang gliding and paragliding at Mission Peak since 1983.

Hikers can observe takeoffs from the launch point 1,950 ft (590 m) above sea level, marked by a large wind sock. Landings occur adjacent to the main hiking trail about one quarter mile (400 m) from the Stanford Avenue entrance, near the proposed site of a parking lot expected in late 2018.

On September 6, 1971, Dave Kilbourne, one of the founders of the Wings of Rogallo, hiked atop Mission Ridge and launched a flex wing hang glider unaided. The flight lasted more than an hour, and he became the first person in the world to do so. 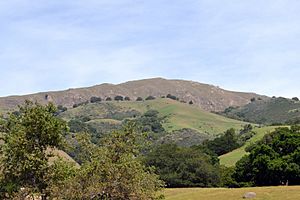 Vegetation at the foothills of Mission Peak

Mission Peak is home to California oak woodland and chaparral. Typical of the interior coast ranges, the woodland contains coast live oak, California bay, California buckeye, blue oak, and western sycamores. Black oak is rare, because most stands have been logged. Bigleaf maples and gray pines are less common, though the old-growth oak forest in the Hidden Valley (see Hiking) known as A.A. Moore Memorial Grove contains all the tree species. Many oaks are 100 to 600 years old, with few younger than 50. Oak saplings have been eaten by cattle and choked by invasives for centuries. The steepest slopes are home to hard, evergreen chaparral, primarily California sagebrush, chamise, and scrub oak.

The grasslands have native and nonnative plants brought by cows, though native wildflowers grow in the spring. The cattle have a feisty reputation. Black-tailed deer are abundant. Pronghorn and tule elk were extirpated in the late 19th century. Tule elk were reintroduced to Alameda County, and now visit occasionally. Predators include bobcats, coyotes, gray foxes, and very rarely seen mountain lions. Small mammals include the black-tailed jackrabbit, the western gray squirrel, and California ground squirrels.

Visitors should beware that northern Pacific rattlesnakes are very common.

Southern Alameda County has a high density of nesting golden eagles, seen often, along with turkey vultures, red-tailed hawks, red-shouldered hawks, prairie falcons, and sharp-shinned hawks. They nest in on the slopes of steep valleys, where no trails enter.

Light snow falls most winters, and melts quickly. Heavy snow falls once or twice a decade, such as in March 2006 (see picture in the Hiking and bicycling section). On December 7, 2009, the snow level dropped to 1,000 ft (300 m) and snow remained for three days. 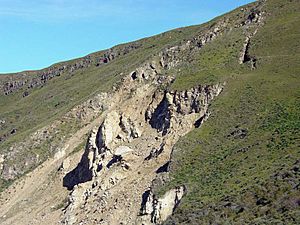 Landslide on the side of Mission Peak

Mission Peak has a large (300 m wide by 1200 m long) landslide that started in 1998 due to the El Niño rains. Landslides had recurred here in the geological past. The landslide threatened new housing, and local development regulations were changed to address the geotechnical hazards.

Some sources have incorrectly labeled Mission Peak as an extinct volcano, because of the sharp point of the peak. However, the mountain is a product of natural uplift and erosion, not of volcanic origin. This range is being compressed and uplifted due to the proximity of the Hayward Fault to the west and the Calaveras Fault to the east.

All content from Kiddle encyclopedia articles (including the article images and facts) can be freely used under Attribution-ShareAlike license, unless stated otherwise. Cite this article:
Mission Peak Facts for Kids. Kiddle Encyclopedia.