The formation of the Great Dividing Range has resulted in a wide variety of soil types being located on the Northern Tablelands. Here soils are mostly derived from basaltic rocks, granite rocks, trap rock or alluvials along creeks and rivers.

The coastal flowing Clarence, Macleay and Manning, rivers have their headwaters on eastern escarpment of the Tableland. The inland flowing rivers have their confluence with the Gwydir, Namoi and Macintyre river systems of the Murray-Darling River Basin. The only major water storage dam on the Northern Tablelands is Copeton Dam on the Gwydir River near Inverell.

The high elevation of the tablelands means cool summers (rarely over 32 °C) but winters are cold with occasional snowfalls and many frosty mornings. Winter minimums can go as low as -10 °C around Armidale, Guyra, Woolbrook and Walcha regions during frosty mornings, but this usually results in clear sunny days. The Northern Tablelands is a high rainfall region with averages ranging from 650 mm on the western slopes to over 1,200 mm on the east of the range. About 60% of this rainfall occurs during the summer months. 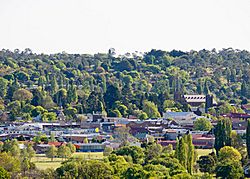 Walcha was the first part of the Northern Tablelands to be discovered in 1818, by the explorer, John Oxley who ascended the range near Limbri. In 1832 Hamilton Collins Semphill, a settler from Belltrees on the Hunter River, formed a station in the upper Apsley River valley and named it Wolka (Walcha) from the local Aboriginal language. Edward Gostwych Cory, who was displaced from his runs by the Australian Agricultural Company, came over the Moonbi Range and settled at Gostwyck, near Uralla. Soon others followed, seeking new lands away from the influence of the Australian Agricultural Company, which dominated resources in the Hunter valley, and settled around the present Armidale district. In 1844 there were 454,193 sheep and 43,377 cattle grazing the tablelands region. Armidale was then gazetted as a town in 1849. Squatters soon settled the tablelands with their large sheep runs before Glen Innes and Tenterfield were surveyed in 1851. Armidale is the only city on the Tablelands and is the administrative centre for the Northern Tablelands region.

In 1852 gold was discovered at Rocky River and by 1856 there were 5,000 miners operating there. Gold was discovered at Bakers Creek, Hillgrove in 1857 but it was not until the late 1880s that the recorded population rose to 2,274 and later to almost 3,000 in about 1898. The difficulties and expense of the deep underground mine workings eventually reduced the gold mining here after 1900.

Captain Thunderbolt the famous bushranger (Frederick Wordsworth Ward, 1836–1870) who escaped from Cockatoo Island came to the Northern Tablelands, where he robbed properties, mail coaches and hotels in the region. In 1866 the Colonial Secretary's Office posted a reward of £100 for his capture, which was raised to £200 by mid-1867 and £400 in December 1869. Many stories have been told his bushranging deeds in the area from Newcastle to the Queensland border. Thunderbolt was shot dead by Constable Walker in May 1870 in Kentucky Creek after a long chase on horseback. His grave is in the town of Uralla, NSW.

The Northern Tablelands includes the towns and Local Government Areas of Armidale, Glen Innes, Guyra, Tenterfield, Walcha, the south-eastern portion of the Inverell Shire and a small part of Tamworth Regional Council area.

The University of New England at Armidale was founded in 1938, becoming the first Australian university established outside a capital city. This public university, with approximately 18,000 higher education students, is one of Australia's major providers of awards to off-campus students.

The Northern Tablelands has a great diversity of plants and fauna, with many thousands of animals, birds and plants in the region.

Bolivia Hill and the adjacent nature reserve are the only recorded locations of the endangered Bolivia Hill boronia (Boronia boliviensis) and the shrub Pimelea venosa. Some rare Hillgrove gum trees (Eucalyptus michaeliana) may be seen growing along the Long Point Road and the Big Lease, Oxley Wild Rivers National Park. These trees have a distinctive, mottled, greenish trunk with peeling yellow-brown bark.

Weeds are an increasing problem across much of the region. Foxes and rabbits are the most significant vertebrae pests of the tablelands.

Eighteen endangered fauna species, found on the Northern Tableland, have been listed in the schedules of the Threatened Species Conservation Act. The endangered Hastings River mouse (Pseudomys oralis) is restricted in distribution to the upland open forests and woodlands around Werrikimbe National Park and south-east Queensland. Other endangered species that may be seen on the Northern Tablelands include the brush-tailed rock-wallaby (Petrogale penicillata) which lives in isolated sections of the Oxley Wild Rivers National Park. The Bundarra-Barraba Important Bird Area is one of only three breeding areas in New South Wales for the endangered regent honeyeater.

All content from Kiddle encyclopedia articles (including the article images and facts) can be freely used under Attribution-ShareAlike license, unless stated otherwise. Cite this article:
Northern Tablelands Facts for Kids. Kiddle Encyclopedia.