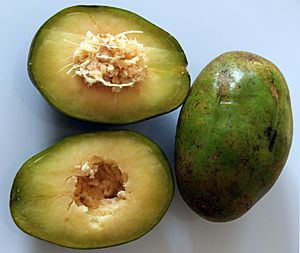 This fast-growing tree can reach up to 20 m (66 ft) in its native range of Melanesia and Polynesia; however, it usually averages 10–12 m (30–40 ft) in other areas. Spondias dulcis has deciduous, pinnate leaves, 20–60 cm (8–24 in) in length, composed of 9 to 25 glossy, elliptic or obovate-oblong leaflets 9–10 cm (3.5–3.9 in) long, which are finely toothed toward the apex. The tree produces small, inconspicuous white flowers in terminal panicles. Its oval fruits, 6–9 cm (2.4–3.5 in) long, are borne in bunches of 12 or more on a long stalk. Over several weeks, the fruit fall to the ground while still green and hard, then turn golden-yellow as they ripen. According to Morton (1987), "some fruits in the South Sea Islands weigh over 500 g (1 lb) each."

Spondias dulcis has been introduced into tropical areas across the world. It was brought to Jamaica in 1782, and it is cultivated in Panama, Cuba, Haiti, the Dominican Republic, Puerto Rico, Trinidad and Tobago, St. Lucia, and eastern Sucre in Venezuela. The United States Department of Agriculture received seeds from Liberia in 1909, but it did not become a popular crop in the US. Nevertheless, it is grown in South Florida as far north as Palm Beach County. The fruit is also widely grown in Somalia's agriculture belt, probably introduced during the colonial times preceding 1960.

The fruit may be eaten raw; the flesh is crunchy and a little sour. According to Boning (2006): "The fruit is best when fully colored, but still somewhat crunchy. At this stage, it has a pineapple-mango flavor. The flesh is golden in color, very juicy, vaguely sweet, but with a hint of tart acidity." In Indonesia and Malaysia, it is eaten with shrimp paste, a thick, black, salty-sweet sauce called hayko in the Southern Min dialect of Chinese. It is an ingredient in rujak in Indonesia and rojak in Malaysia. The juice is called kedondong in Indonesia, amra in Malaysia, and balonglong in Singapore.

The fruit is made into preserves and flavorings for sauces, soups, braised and stews. In Fiji it is made into jam. In Samoa and Tonga it is used to make otai. In Sri Lanka the fruit is soaked in vinegar with chili and other spices to make acharu. In Vietnam the unripe fruit is eaten with salt, sugar, and chili, or with shrimp paste. Children eat the fruit macerated in artificially sweetened licorice extract. In Jamaica, it is mostly considered a novelty, especially by children. It can be eaten with salt or made into a drink sweetened with sugar and spiced with ginger. It is also used to make juice in Grenada. In Trinidad and Tobago, it is curried, sweetened, salted, or flavored with pepper sauce and spices. In Cambodia it is made into a salad called nhoam mkak (/ɲŏam məkaʔ/ ញាំម្កាក់). In Suriname, the fruit is dried and made into a spicy chutney, mixed with garlic and peppers. In Thai cuisine both the fruits and the tender leaves are eaten.

All content from Kiddle encyclopedia articles (including the article images and facts) can be freely used under Attribution-ShareAlike license, unless stated otherwise. Cite this article:
Spondias dulcis Facts for Kids. Kiddle Encyclopedia.