Sports in the San Francisco Bay Area facts for kids 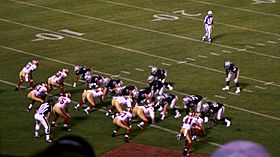 The Raiders against the 49ers at McAfee Coliseum in 2008

TPC Stonebrae is a private golf club that hosts the TPC Stonebrae Championship, part of the Web.com Tour since 2009. 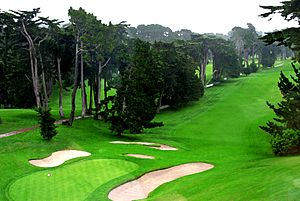 The 18th hole at the Olympic Club.

With an ideal climate for outdoor activities, San Francisco has ample resources and opportunities for amateur and participatory sports and recreation. There are more than 200 miles (320 km) of bicycle paths, lanes and bike routes in the city, and the Embarcadero and Marina Green are favored sites for skateboarding. Extensive public tennis facilities are available in Golden Gate Park and Dolores Park, as well as at smaller neighborhood courts throughout the city. San Francisco residents have often ranked among the fittest in the U.S. Golden Gate Park has miles of paved and unpaved running trails as well as a golf course and disc golf course.

Boating, sailing, windsurfing and kitesurfing are among the popular activities on San Francisco Bay, and the city maintains a yacht harbor in the Marina District. The St. Francis Yacht Club and Golden Gate Yacht Club are located in the Marina Harbor. The South Beach Yacht Club is located next to AT&T Park and Pier 39 has an extensive marina.

All content from Kiddle encyclopedia articles (including the article images and facts) can be freely used under Attribution-ShareAlike license, unless stated otherwise. Cite this article:
Sports in the San Francisco Bay Area Facts for Kids. Kiddle Encyclopedia.