Storybook Squares was the name given to a special series of episodes of the NBC game show Hollywood Squares. The series featured celebrities dressed up as famous people and characters from history and various forms of media.

Peter Marshall served as host of these episodes. The panelists were introduced by "The Guardian of the Gate", who announced their characters' presence by reading their names from a scroll. The Guardian was played by regular Hollywood Squares announcer Kenny Williams, and the character was similar to his "Town Crier" character from Video Village.

The series ran on NBC on Saturday mornings from January 4 to April 19, 1969, with repeats airing until August 30. The concept was revived during the 1976-1977 season as a series of special theme weeks on the daytime Hollywood Squares.

On the original edition of Storybook Squares, the game was played in the same manner as the regular game, with celebrities in the squares dressed as storybook and nursery rhyme characters. Two children competed, always boy vs. girl with the boy as X and the girl as Circle. They played as many games as time permitted, with a prize being awarded for each win. No money was awarded; a Secret Square game for the first two games was played, with the setup identical to the 1968 primetime game and first two years of the syndicated version—that is, if the first game's Secret Square was not won, the package was combined with that of the second game, and then after that it was not won. 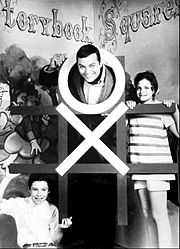 Host Peter Marshall with contestants on Storybook Squares in 1969 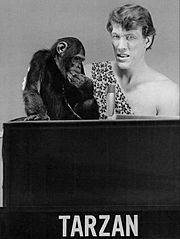 Ted Cassidy, best known as Lurch on The Addams Family as Tarzan with Cheeta was a 1969 panelist.

The only panelist from the adult show who played as he normally would was Cliff Arquette, who carried his "Charley Weaver" persona over to Storybook Squares. The other panelists played characters from fairy tales and books, historical figures, or in some cases the characters they played on television.

Unlike the parent series, on Storybook Squares each panelist/character was given an elaborate introduction as they entered the set and took their place on the board, allowing for a brief comic interaction with host Marshall as they did so. Some of the celebrities who appeared were:

The children played the first game of the match, with the parents playing the second and the grandparents each subsequent game as time permitted. $300 was awarded for each game won, with $50 awarded per square if time was called during a game.

The team with the most money at the end of the game won a large prize, such as a car or exotic vacation.

The 1969 set was decked out in a medieval theme for the host and players' podiums, while the gameboard remained the same as on the adult version. The 1970s sets extended the medieval theme to the entire set, with a sweeping castle facade built around and behind the "Squares".

The 1969 version's status is unknown. While NBC kept most of its Saturday morning programming, they were also known to wipe episodes of game shows and it is believed that this practice was used on the series. One episode was uploaded to YouTube in December 2016.

The fate of the 1976-77 specials is also unclear as NBC was still employing wiping as a practice at the time. Game Show Network aired a December 1977 episode as part of a Halloween-themed marathon in 2002; it was the only NBC daytime episode to be rerun by GSN. Another episode that originally aired on July 4, 1977 is available on YouTube. A third episode, from 1976, surfaced on YouTube in August 2019.

All content from Kiddle encyclopedia articles (including the article images and facts) can be freely used under Attribution-ShareAlike license, unless stated otherwise. Cite this article:
Storybook Squares Facts for Kids. Kiddle Encyclopedia.