Troy is a town in Cheshire County, New Hampshire, United States. The population was 2,130 at the 2020 census. It is situated west of Mount Monadnock.

The town's central village, where 1,108 people resided at the 2020 census, is defined as the Troy census-designated place (CDP), and is located along New Hampshire Route 12. The center of the CDP is listed on the National Register of Historic Places as the Troy Village Historic District. 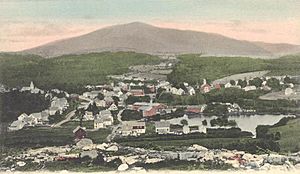 Settled in 1762, by 1815 the community had grown so much that it sought its own incorporation. It was set off from Marlborough that year, and included parts of Fitzwilliam, Swanzey and Richmond. A prominent citizen and friend of Governor John Taylor Gilman, Captain Benjamin Mann of Mason, suggested the name Troy. His daughter, Betsy, was married to Samuel Wilson, famous as "Uncle Sam", and at that time a resident of Troy, New York. At least seven members of Wilson's family were living in the town at the time, thus securing the name. The town hall, built in 1813-1814 near the rail-fenced common, was originally the village meetinghouse.

Troy Mills, which started making horse blankets in the mid-19th century, served as the backbone of the town's economy for nearly 100 years. In 1865, the company was sold by founder Thomas Goodall, who in 1867 would establish Goodall Mills in Sanford, Maine. Troy Mills declared bankruptcy in late 2001, and ceased operations in 2002. The giant mill complex on Monadnock Street now houses two smaller spin-offs of Troy Mills—Knowlton Nonwovens and Cosmopolitan Textiles. The Troy trademark is now used for felt made by a company in West Virginia. Wooden-ware, pottery and fine building stone were also once the products of Troy industries. As of 2008, Troy Mills was being renovated to become a retirement community.

The highest point in town is the south summit of Gap Mountain, at 1,900 feet (580 m) above sea level, near the eastern border. The summit of Mount Monadnock is 2 miles (3 km) northeast of the town in Jaffrey. 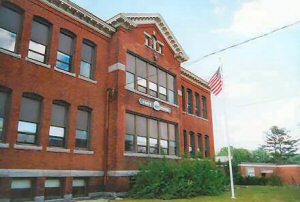 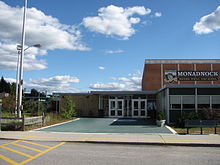 The elementary school is located in Troy, whereas the middle-high school is to the north in the town of Swanzey. Troy School has been educating the children of Troy since 1895 when it was built to house 225 children of all ages. Troy School presently accommodates approximately 135 students in grades K–6. The school day starts at 8:30 AM and ends at 3:10 PM. Students may enter the building at 8:15 AM to have breakfast and get ready for class.

The town of Troy also has two 2015 NH licensed child care facilities with a capacity for up to 75 children.

All content from Kiddle encyclopedia articles (including the article images and facts) can be freely used under Attribution-ShareAlike license, unless stated otherwise. Cite this article:
Troy, New Hampshire Facts for Kids. Kiddle Encyclopedia.