Watlington is a market town and civil parish about 7 miles (11 km) south of Thame in Oxfordshire. The parish includes the hamlets of Christmas Common, Greenfield and Howe Hill, all of which are in the Chiltern Hills. The M40 motorway is about 2 1⁄2 miles (4 km) from Watlington. The 2011 Census recorded the parish's population as 2,727.

The Watlington area is likely to have been settled at an early date, encouraged by the proximity of the Icknield Way. The toponym means "settlement of Waecel's people" and indicates occupation from around the 6th century. A 9th-century charter by Æthelred of Mercia records eight 'manses' or major dwellings in Watlington. The Domesday Book of 1086 identified the area as an agricultural community valued at £610.

There are records of inns in Watlington since the 15th century. In 1722 the town's market was listed as being held on a Saturday. By the end of the 18th century the town had six inns, all of which were bought up in the next few years by a local brewing family, the Haywards. The number of licensed premises increased until late in the 19th century when George Wilkinson, a Methodist bought six of them and closed them down. Today Watlington has three public houses: the Carriers Arms, The Chequers and The Fat Fox Inn.

Parliamentarian troops were billeted at Watlington during the English Civil War. It is thought that John Hampden stayed in the town the night before the Battle of Chalgrove Field.

In 1664–65 the Town Hall was built at the expense of Thomas Stonor. Its upper room was endowed by Stonor as a grammar school for boys, and in 1731 Dame Alice Tipping of Ewelme gave a further endowment to increase the number of pupils. In 1842 the town Vestry established a National School, which shared the same rooms in the Town Hall. In 1843 a National School for girls was built next to St Leonard's church. In 1872 the boys' and girls' schools were absorbed into a new Board school, which like its predecessors was affiliated to the National Society for Promoting Religious Education. In 1927 the school was divided into separate junior and senior schools. In 1956 a new secondary school – the Icknield School – opened for senior pupils and the primary school took over the old premises. The Icknield School is now Icknield Community College. 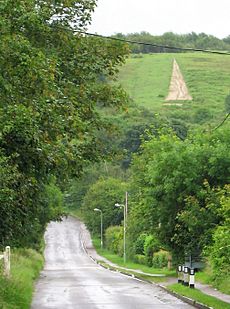 The Watlington White Mark was designed by local squire Edward Horne, who felt that the parish church of St Leonard, when viewed from his home, would be more impressive if it appeared to have a spire. He had this unusual folly cut into the chalk escarpment of Watlington Hill in 1764. It is 36 feet (11 m) wide at its base and 270 feet (82 m) long.

In 1872 the Watlington and Princes Risborough Railway was opened. Its Watlington terminus is in fact in Pyrton parish, 1⁄2 mile (800 m) from Watlington. In 1883 the Great Western Railway took over control of the line. In 1957 British Railways closed Watlington station and withdrew all passenger services between Watlington and Chinnor, which was still being used by the local Chinnor Cement Works. In 1961 BR withdrew all services from the line, the track was lifted and the line left abandoned. Watlington railway station site remains, as does the station building, the corrugated iron carriage shed, and the brickwork of the goods shed.

By 1895 the Town Hall, no longer used as a school, was in disrepair. In 1907 it was restored by public subscription. It is a landmark at the meeting point of three roads in the centre of the town.

The Watlington Hoard, a collection of silver items dating back to the time of Alfred the Great in the 9th century, was rediscovered in Watlington by James Mather, an amateur metal-detectorist, in 2015. The hoard was subsequently excavated, and eventually purchased by the Ashmolean Museum in Oxford for £1.35m.

The Ridgeway National Trail walking route, which is part of the longer Icknield Way, passes southeast of the town along the foot of the Chiltern Hills.

Watlington has a Women's Institute.

Since 1990 Watlington has been twinned with the town of Mansle in the Poitou-Charentes region of France.

All content from Kiddle encyclopedia articles (including the article images and facts) can be freely used under Attribution-ShareAlike license, unless stated otherwise. Cite this article:
Watlington, Oxfordshire Facts for Kids. Kiddle Encyclopedia.