Wildlife of Sweden facts for kids

The wildlife of Sweden includes the diverse flora and fauna of Sweden. The country has a long coastline and the habitats include mountains, hills, tundras, forests, rivers, lakes and cultivated land. The climate is in general very mild for a country at this latitude, because of the significant maritime influence.

Sweden is an elongated country to the east of Norway and the Scandinavian Mountains and to the west of the Baltic Sea and the Gulf of Bothnia. It extends from a latitude of 55°N to more than 70°N, which is north of the Arctic Circle. The coastline is much indented with many small islands and two larger ones in the Baltic Sea, Gotland and Öland. To the southwest lie the sea areas of the Skagerrak the Kattegat while to the northeast lies the land border with Finland.

Much of Sweden is heavily forested, with 69% of the country being forest and woodland, while agricultural land constitutes only 8% of land use. Most of northern and central Sweden constitutes the Norrland terrain which consist of large areas of hilly and mountainous land covered with boreal forests. South and east of this is the Central Swedish lowland region which used to be covered by broad-leaved forests but has now largely been cleared. Some very large lakes occur in this region. The fertile soil supports agriculture but some soils in the hilly parts are thinner and in these parts, Scots pine and Norway spruce grow. To the south of this region, the land rises to the South Swedish highlands, a terrain of elongated hills and plains largely covered by broadleaf forests and the region of Sweden with the greatest biodiversity.

Despite its northerly latitude, most parts of Sweden have a temperate climate with few temperature extremes. Climatically, the country can be divided into three regions; the northernmost part has a subarctic climate, the central part a humid continental climate and the southernmost part an oceanic climate. The country is much warmer and drier than other places at a similar latitude, mainly because of the combination of the Gulf Stream and the general westerly direction of the wind. The northern half of the country gets less rainfall than Norway because of the rain shadow effect caused by the Scandinavian Mountains.

There are an estimated 50,000 species of animals and plants in terrestrial habitats in Sweden; this represents 32% of the total species found in Europe. These include 73 species of mammal, 6 species of reptile, 12 species of amphibian, 56 species of freshwater fish and 372 species of vascular plant. 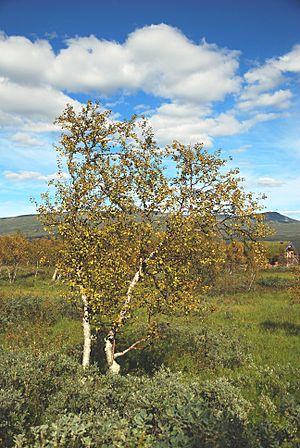 Mountain birch near the treeline 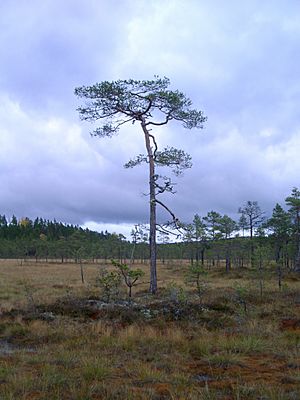 Peat bog in Dalarna, the Scots pine is common in the boreal forest

Skåne and a narrow strip along the west coast belong to the nemoral zone where beech (Fagus sylvatica) is the dominant tree species. Forest herbs in this zone commonly vegetate and flower in spring, as the crown of beech is very dense, and little light reaches the ground once the leaves appear. Examples are Anemone spp. and Corydalis spp. Oak (Quercus robur and Quercus petraea) forest occurs on poor soils. Forest of alder (Alnus glutinosa), ash (Fraxinus excelsior) and elm (Ulmus glabra) grow in nutrient-rich, often wet soil, but most of these areas have long since been drained and converted to arable fields.

Most of Sweden below the mountains is covered by conifer forest and forms part of the circumboreal zone. South of river Dalälven, there are scattered deciduous trees like oak (Quercus robur), and this zone is referred to as boreo-nemoral. North of Dalälven, in the proper boreal (taiga) zone, deciduous trees are rarer, but birches (Betula pubescens and Betula pendula) and aspen (Populus tremula) may be abundant in early successional stages, such as after fire or in recently clear-cut areas. There are a total of four native conifers in Sweden, and of these only Norway spruce (Picea abies) and Scots pine (Pinus sylvestris) form forests, in pure or mixed stands. Spruce grows wetter and pine drier, but in bogs there are often numerous dwarfed pines. Undergrowth in spruce forest is commonly almost pure stands of bilberry (Vaccinium myrtillus). In wetter types ferns (e. g. Athyrium filix-femina and Dryopteris spp.) are abundant and in richer parts herbs (e. g., Paris quadrifolia, Actaea spicata) and broad-leaved grasses (e. g. Milium effusum). In pine forest, lingonberries (Vaccinium vitis-idaea), heather (Calluna vulgaris) and/or Cladonia lichens are most common. Fires occur at irregular intervals, and usually kill all spruce and most pines. Fireweed (Epilobium angustifolium), raspberry (Rubus idaeus) and Geranium bohemicum are among the first plants to germinate in the ashes.

The forests of Sweden are intensively managed, excluding only some of the coldest areas and extremely rocky terrain. Fragments of old growth forest still remain near the mountains, but these mostly lack protection and are rapidly being lost. Native conifers are usually used, but some exotic species, particularly the North American lodgepole pine Pinus contorta, are sometimes planted.

In the mountains, the conifers are replaced by birch (Betula pubescens ssp. tortuosa), which forms the tree-line in most areas. The undergrowth in these forests is quite variable. Under wet and nutrient-rich conditions, a luxuriant vegetation may develop, consisting of tall herbs such as Aconitum septentrionale, Angelica archangelica and Cicerbita alpina. Above the birch forest, starting at 300–1000 m, depending on latitude, there are usually willow-thickets, and above these alpine heath or meadows, the former dominated by dwarf shrubs of the family Ericaceae, the latter by sedges, rushes and various herbs such as Saxifraga spp., Dryas octopetala and Draba spp. Ranunculus glacialis reaches the highest altitude of all plants, often growing near the ever-shrinking glaciers.

Wetlands cover large areas in Sweden. In the south, raised bogs are a common variety, of which a striking example is Store Mosse. They are largely consisting of living and dead Sphagnum spp., with scattered dwarf shrubs and sedges such as Eriophorum vaginatum. In the wet southwest, Narthecium ossifragum and Erica tetralix occur in the bogs, while in the north and the east, the dwarf birch Betula nana and Ledum palustre, an evergreen shrub, are common. Rich fens, with many sedges and orchids, are rather rare, except on Gotland and Öland, two large limestone islands in the Baltic, where Cladium-dominated fens are common. In the north of Sweden, there are many large mire complexes with both fen- and bog-like parts. The largest is found in Sjaunja, a nature reserve in Lapland.

Sweden has as many as 90000 lakes bigger than one hectare. Most of these are either nutrient poor with clear water and few plants (e.g. Lobelia dortmanna and Isoëtes spp.), like lake Vattern, or small ponds with brown water surrounded by floating mats of bog vegetation (e.g. sedges and Menyanthes trifoliata). Nutrient-rich lakes are found mostly in the south, and typically have dense reed stands, other emergent plants (e.g. Iris pseudacorus and Sparganium erectum), free-floating plants such as Hydrocharis morsus-ranae and Stratiotes aloides, and submerged vegetation with spp. of Potamogeton, Ranunculus etc. The best known lakes in this category are undoubtedly Tåkern and Hornborgasjön.

The coast of Sweden is long, and conditions are quite different at the endpoints. Near the Norwegian border, conditions are typical North Atlantic, turning to subarctic near the Finnish border, where salinity is down to 0,1-0,2 %. A common seashore species there is the endemic, tussock-forming grass Deschampsia bottnica, which survives the destructive force of the up to 2 m thick sea-ice. Common submerged vascular plants in this area, the Gulf of Bothnia, are, among others Myriophyllum sibiricum, Callitriche hermaphroditica and Stuckenia pectinata. On the west coast, one may instead find Zostera marina in similar localities.

The highest part of the country is part of the Scandinavian montane birch forest and grasslands ecoregion. At the highest altitude is high alpine tundra with very modest vegetation and bare rock, skree, snowfields and glaciers. At lower altitude is low alpine tundra with continuous plant cover; dwarf birch and willows up to 1 m (3 ft) tall and grasslands, as well as numerous lakes and bogs. At still lower altitude is the adjacent montane birch zone with small (2 to 5 m (7 to 16 ft)) mountain downy birch (Betula pubescens) above the conifer tree line; some stunted spruce and pine also occur here.

At lower altitudes in the northern and central parts of the country, coniferous forests in the Scandinavian and Russian taiga ecoregion occur. These are dominated by Scots pine (in drier locations), often with an understory of common juniper, Norway spruce and Siberian spruce and a significant admixture of downy birch and silver birch. Aspen and birch occur throughout this region, and Siberian larch is characteristic of the eastern part of the ecoregion. In the south east, there are scattered broad-leafed trees such as elm, ash and lime, but no oak.

In the south of the country there is a southern coniferous forest region, demarcated by the northerly limit of the oak and the southern limit of the natural regeneration of spruce. Mixed with the spruce and pine in these forests are deciduous trees including the pioneering species such as birch, alder and aspen, and the long-lived oak, elm and lime.

According to Swedish state owned Sveaskog ca 25% of 10 to 30 years old forest in Norrbotten and Västerbotten was damaged in 2019 e.g. by conifer fungus. 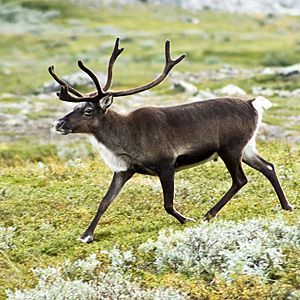 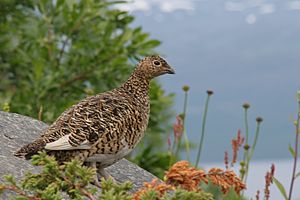 According to Avibase: Bird Checklists of the World, 535 species of bird have been recorded in Sweden. Many of these are migratory birds, making their way between Arctic breeding grounds and overwintering quarters further south in Europe and Africa. The lakes, wetlands and coasts provide nesting opportunities for water birds and seabirds and the upland regions are home to willow ptarmigan, black grouse, western capercaillie, owls and birds of prey.

The only endemic fish in Sweden is the critically endangered freshwater Coregonus trybomi, still surviving in a single lake. Amphibians found in Sweden include eleven species of frogs and toads and two species of newt, while reptiles include four species of snake and three of lizard. They are all protected under the law.

Forests have been conserved in Sweden for over thirty years with a view to encouraging biodiversity. This is done at various scales, from the small scale leaving of individual dead and living trees in otherwise cleared areas and the medium scale retention of forest remnants, with 5% of the forested land being retained for conservation purposes, to the large scale preservation and protection of large areas with high conservation value through the creation of nature reserves.

Climate change is likely to have an effect on the country's biodiversity, with the treeline moving further north and to higher altitudes, and forests replacing tundra. The melting of ice will increase runoff, affecting wetlands. With a rise in sea level, the Baltic Sea will receive greater inflow of saline water.

All content from Kiddle encyclopedia articles (including the article images and facts) can be freely used under Attribution-ShareAlike license, unless stated otherwise. Cite this article:
Wildlife of Sweden Facts for Kids. Kiddle Encyclopedia.