Baltimore/Washington International Thurgood Marshall Airport (IATA: BWI, ICAO: KBWI, FAA LID: BWI) is an international airport located in Linthicum in northern unincorporated Anne Arundel County, Maryland. The airport is 9 miles (14 km) south of downtown Baltimore and 32 miles (51 km) northeast of Washington, D.C. It is the busiest, by passenger count, of three major airports serving the Baltimore–Washington Metropolitan Area in the United States, the other two being Ronald Reagan Washington National Airport and Washington Dulles International Airport. It is commonly referred to as BWI or BWI Marshall. The airport is named after Thurgood Marshall, a Baltimore native who became the first African American to serve on the Supreme Court of the United States.

BWI is a focus city for Southwest Airlines, and is the second-largest airport by number of departures for that airline after Chicago–Midway. With a 71% market share in 2014, BWI is also a fortress hub for Southwest. A record 23.8 million passengers traveled through BWI in 2015, an increase of 6.8% over the previous year. BWI was ranked as the 23rd-busiest airport in North America and the 75th busiest airport in the world in 2014 by the number of passengers.

In 2010, BWI was ranked as the best airport of its size (15–25 mil. passengers) in the world by the Airports Council International based on its 2009 Airport Service Quality survey. The airport also was ranked second for North American airports in the "Best Food and Beverage Program" of the 2010 Richard A. Griesbach Excellence in Airport Concessions Contest, sponsored by the Airports Council International.

Police services are provided by the Maryland Transportation Authority Police.

Planning for a new airport on 3,200 acres (1,300 ha) to serve the Baltimore/Washington area began just before the end of World War II. In 1944, the Baltimore Aviation Commission announced its decision that the best location to build a new airport would be on a 2,100-acre (850 ha) tract of land near Linthicum Heights. The cost of building the airport was estimated at $9 million. The site was chosen because it was a 15-minute drive from downtown Baltimore; close to the Pennsylvania Railroad line, the Baltimore and Annapolis Railroad line, and the proposed Baltimore–Washington Parkway; and visibility was generally good. An alternate site along Ritchie Highway at Furnace Branch was rejected by the United States War Department, and another possible site at Lipin's Corner was deemed too far from Baltimore. The State Aviation Commission approved of the Linthicum Heights site in 1946.

Friendship International Airport was dedicated on June 24, 1950, by President Harry Truman. At the time, it had the only commercial jet service in the Baltimore–Washington metropolitan area. Truman arrived in the Independence from Washington National carrying Governor William Preston Lane, Jr. and Baltimore Mayor Thomas D'Alesandro, Jr. on his first aircraft flight. The total cost to construct the airport totaled $15 million. The following month the airlines moved to the new airport from Baltimore Municipal Airport (southeast of Baltimore at 39°15′N 76°32′W﻿ / ﻿39.25°N 76.53°W﻿ / 39.25; -76.53). Eastern Airlines flew the first scheduled flight, a DC-3, into the airport at 12:01 am on July 23, 1950. Seven minutes later, the same plane was also the first flight to depart from the airport. 300 people came to watch the first flight arrive and depart.

The Official Airline Guide for April 1957 shows 52 weekday departures: 19 Eastern, 12 Capital, 8 American, 4 National, 3 TWA, 3 United, 2 Delta, and 1 Allegheny. Miami had a couple of nonstop flights, but westward nonstop flights did not reach beyond Ohio; Baltimore's reach expanded when jet service started. The early Boeing 707s and Douglas DC-8s could not use Washington National Airport and Washington Dulles International Airport did not open until 1962, so Baltimore became Washington's jet airport in May–June 1959 when American and TWA began transcontinental 707 flights.

The State of Maryland, through the Maryland Department of Transportation, purchased Friendship International Airport from the City of Baltimore for $36 million in 1972. Under MDOT, the Maryland State Aviation Administration took over airfield operations and grew from three employees to more than 200. Plans to upgrade, improve, and modernize all Maryland airport facilities were announced almost immediately by the Secretary of Transportation, Harry Hughes.

The first phase of the airport's modernization was completed in 1974 at a cost of $30 million. Upgrades included improved instrument landing capabilities and runway systems, and construction of three new air cargo terminals, expanding the airport's freight capacity to 2.53 acres (1.02 ha).

The passenger terminal renovation program was complete in 1979, the most dramatic work of the airport's modernization, which was designed by DMJM along with Peterson & Brickbauer. The BWI terminal more than doubled in size to 14.58 acres (5.90 ha); the number of gate positions increased from 20 to 27. The total cost was $70 million. To continue the work, the BWI Development Council was established to support initiatives for airport development.

The BWI Rail Station opened in 1980, providing a rail connection to passengers on the busy Northeast Corridor through Amtrak. BWI was the first airport in the U.S. with a dedicated intercity rail station. In particular, the station provided relatively easy transit access to Washington, D.C., something that Dulles will not have until 2018 at the earliest. In 1997 a new international terminal (Concourse E), designed by STV Group and William Nicholas Bodouva & Associates, was added, though Dulles continues to hold the lion's share of the region's international flights, and BWI has not attracted many long-haul international carriers. British Airways has had a presence at BWI for many years. AerLingus, Air Jamaica, Air Aruba, Air Greenland, El Al, Ghana Airways, Icelandair, KLM, Ladeco, and Mexicana previously flew to BWI. Military flights, operated by the U.S. Air Force's Air Mobility Command, continue to have a significant presence at BWI.

Beginning in the 1980s and later for much of the 1990s, BWI was a major hub for Piedmont Airlines and successor US Airways, but that airline's financial difficulties in the wake of the dot-com bust, the September 11 attacks, and intense low fare competition forced it to reduce its presence at the airport. The airport has been a major haven for low-cost flights in the Baltimore/Washington Metropolitan Area since Southwest Airlines' arrival in September 1993 and subsequent expansion in the early 2000s. Southwest is the airport's largest carrier, accounting for 56.12% of passengers carried in 2011. Southwest Airlines currently serves on average 245 daily departures to destinations in the US, Mexico and the Caribbean.

To accommodate Southwest's extensive presence at the airport, in 2005 Concourses A and B were expanded, renovated, and integrated with one another to house all of that airline's operations there. This new facility, designed by URS Corporation, opened on May 22, 2005. On October 1 of that year, the airport was renamed again, becoming Baltimore-Washington International Thurgood Marshall Airport, to honor former US Supreme Court justice Thurgood Marshall, who grew up in Baltimore.

The airport has been a backdrop in numerous films, including The Silence of the Lambs, Goldfinger, Broadcast News, and Twelve Monkeys.

In late 2008, Health magazine named BWI the second healthiest airport in the United States. In 2009 the airport had a six percent increase in air travelers due to the proliferation of discount flights. In a 2009 survey of airport service quality by Airports Council International, BWI was the world's top ranking airport in the 15-to-25-million-passenger category. BWI also ranked seventh, in medium-sized airports, based on customer satisfaction conducted by J.D Power and Associates.

In early 2016, a partnership between the airport and Towson University's WTMD Radio Station announced a new concert series that will take place at the terminal's baggage claim on the lower level. The local bands of Wye Oak, Arboretum, and Super City. This new series follows the release event of Animal Collective's new album Painting With on November 25, 2015, where the new album was streamed throughout the airport. 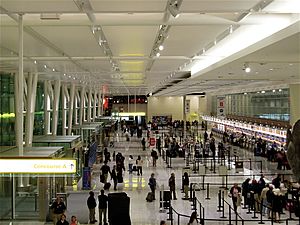 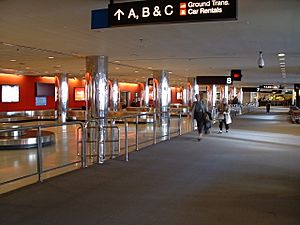 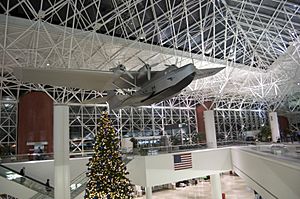 Baltimore/Washington International Thurgood Marshall Airport has five concourses, though Concourses A and B were essentially merged into a single concourse in the renovations completed in 2005. The Maryland Aviation Administration has its headquarters on the third floor of the terminal building.

Concourse C has 14 gates: C1 to C14.
The tenants of the concourse are Alaska Airlines, American Airlines and Southwest Airlines. Concourse C is connected to Concourses A/B by a secure connector.

The Federal Aviation Administration is currently in the process of designing a new air traffic control tower that will replace the current tower. The new tower is estimated to cost between $21 million and $26 million and be 228 ft (69 m) tall. There is no estimated construction start date.

A $60.3 million expansion to Concourse E was announced in February 2017. The enhancements include 70,000 square feet of new terminal space and six additional international gates. The airport is aiming at getting new service to Asia and additional service to Europe in the near future.

BWI was ranked one of the "Top 10 Easiest U.S. Airports to Get to" by Aviation.com in 2007 and has a light rail station located in its main terminal. 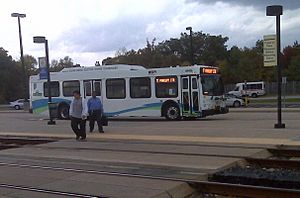 Bus service between BWI and the Greenbelt station of the Washington Metro and MARC Camden Line is provided by WMATA's Metrobus on Route B30 every 40 minutes from 6am-11pm on weekdays and 8:30am–10:30pm on weekends. The regular fare is $7.00 and the disabled/senior citizens rate is $3.50.

The RTA 501/Silver Route operates between BWI and The Mall in Columbia hourly at most times except overnight.

BWI is located at the southeast terminus of Interstate 195, a spur route providing connections to the Baltimore–Washington Parkway and Interstate 95. 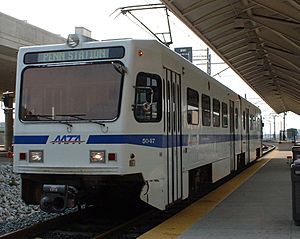 BWI Rail Station is located about a mile from the airport terminal; the free BWI Marshall Airport Shuttle connects the train station and airport terminals. The station is served by Amtrak Northeast Corridor trains, including the partially high-speed Acela Express, and the MARC Penn Line. Travel time by train is about twenty minutes to Baltimore's Penn Station and thirty-five minutes to Union Station in Washington, D.C. Trains depart at least once an hour seven days a week, with departure times during rush hours and business hours being significantly more frequent.

The Maryland Transit Administration's Light Rail line has a stop just outside the entrance to the airport's International Terminal. Passengers can take the Light Rail to a variety of destinations in Anne Arundel County, Baltimore City, and Baltimore County, and can transfer to the Metro Subway in Baltimore, or to either of MARC's Baltimore terminals. A ride downtown takes approximately 30 minutes. Trains run every 20 minutes during peak hours, and 30 minutes all other times.

In June 2007, the Maryland Department of Transportation, at the request of the Maryland General Assembly in 2006, commissioned a report on a proposal to extend the Washington Metro Green Line, from its current terminus at Greenbelt, through Howard County to BWI.

In August 2014, BWI launched a new bicycle sharing system with the Boston-based company Zagster. Located adjacent to the BWI Airport Light Rail Station, the bike sharing service connects terminal passengers to the nearby BWI Trail, as well as other local destinations.

In 1985, the BWI Business District was established as a way to formalize businesses and hotels operating adjacent to the airport. The district comprises two smaller districts located to the north (West Nursery Hotel District) and west (Stoney Run District) of the airport. Numerous traveler resources and employment centers are located within both districts, such as the BWI Rail Station and BWI Rental Car Facility in the Stoney Run District, and the BWI Business District Light Rail Station, the NSA Friendship Annex, and dozens of hotel facilities in the West Nursery District.

A DHS facility is located in the lower level of the main terminal, near the international arrivals area / Concourse E Baggage Claim. This facility also includes a Global Entry Enrollment Center, as well as a TSA PreCheck enrollment facility.

In the early 1990s, BWI Airport opened the Thomas A. Dixon Aircraft Observation Area at Friendship Park. The observation plaza features a playground and a terrace overlooking the southern approach to the airport's 15R-33L runway. From this vantage point, several planes can be viewed simultaneously as they prepare for landing. The southern loop of the 13.3 mile BWI Trail travels through the park, providing cyclist and pedestrian access to the park.

All content from Kiddle encyclopedia articles (including the article images and facts) can be freely used under Attribution-ShareAlike license, unless stated otherwise. Cite this article:
Baltimore–Washington International Airport Facts for Kids. Kiddle Encyclopedia.