Biker Mice from Mars is a science fiction action animated series created by Rick Ungar that began airing in 1993, in the United States and lasted for three seasons. 65 episodes were produced.

The show follows three anthropomorphic mice motorcyclists named Throttle, Modo, and Vinnie who escape a war on their home planet Mars before arriving to defend the Earth from the evil that destroyed their homeland (the Plutarkians) and to one day return to Mars. The mice's signature weapons consist of a cestus and a laser (Throttle), a bionic arm (Modo), and flares (Vinnie). Despite the frequent battles, no blood is shown, no firearms are used and many villains are monsters, aliens, and robots.

On the planet Mars, there existed a race of anthropomorphic mice who enjoyed motorsports and had a very similar culture and society to that of human beings. At some point in time they were all but wiped out by the Plutarkians, an alien race of obese, foul-smelling, worm-eating, fish-like humanoids who plunder other planets' natural resources because they have wasted all of their own. Three survivors: Throttle, Modo and Vinnie, manage to find a spaceship and escape the Plutarkian takeover but they are soon shot down by a Plutarkian warship and end up crash-landing on Earth in the city of Chicago, specifically in the scoreboard of Quigley Field. There they meet a charming female mechanic named Charlene "Charley" Davidson and discover that the Plutarkians have come to Earth to steal its natural resources.

The Biker Mice investigate the crumbling ghetto of the windy city and soon discover that Chicago's leading industrialist, Lawrence Limburger, is actually a Plutarkian who disguises himself as a human, plotting to ransack Earth's resources to send to his own dying planet. Limburger enlists two henchmen, mad scientist Dr. Karbunkle and the idiotic Greasepit to help him steal Earth's natural resources and send them to Plutark with the help of some supervillains that they transport from another location in the galaxy. The Biker Mice dedicate themselves as heroic vigilantes destined to stop Limburger's evil schemes. The most frequent sign of victory is destroying Limburger's tall tower, forcing him to constantly spend money and time to rebuild it by the next episode. 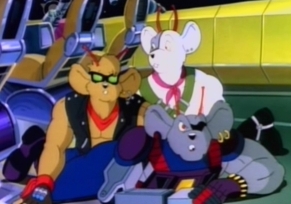 In most episodes, Limburger orders Karbunkle to use the transporter to bring into Chicago one of the very powerful supervillains in the universe. Generally each of them have one special ability which is useful for Limburger's plan in hand. Most of them seem to use an asteroid station called Black Rock as their main hideout when they are not summoned by those willing to pay for their services. On one notable occasion in the episode "A Scent, a Memory, a Far Distant Cheese", Limburger and Karbunkle accidentally got sucked into the transporter and appear at the Black Rock where all the villains up to that episode confront him for not paying them as they asked for. The episode "Diet of Worms" shows that the other Plutarkians can use the same supervillains.

The following supervillains are listed in order of appearance:

The Biker Mice from Mars returned to TV screens in 2006. The 2006 Biker Mice From Mars series is a continuation of the story, and gives more airtime to another character, General Stoker.

The new 28 episode series began airing in the UK on Toonattik on GMTV (now known at weekends as CITV) on August 26, 2006. However, due to production problems at the studio in the Philippines the series was not finalized until late 2007, resulting in the launch in the USA and many other countries being delayed until 2008 as it still needed to be dubbed.

The series was largely influenced by the major toy line that was manufactured by Italian giant, Giochi Preziosi in 2005. GP retained Pangea as developers of the toy line, working in tandem with creator and executive producer, Rick Ungar. Characters, vehicles, and weapons used in the series were first developed by Pangea and turned over to G7 Animation for integration into the series. The team of Ungar, G7, and Pangea collaborated in order to maintain consistency between the intellectual property and the execution of the primary toy range, as the GP licensing monies were utilized to set in motion the series development.

The new series launched in autumn of 2008 in Italy on Italia 1, and on August 9 of the same year on 4Kids TV on Fox.

The series also launched successfully in Finland on MTV3 and in Australia on Channel Ten in October 2006. 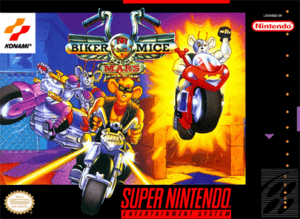 An LCD game of same name was released for Tiger Electronic Game on 1993.

In 2006, another Biker Mice from Mars video game was released based on the 2006 revival in Finland, Australia and the United Kingdom for the Nintendo DS and PlayStation 2 platforms. The game did not receive any major positive ratings although it was a major sales success throughout Scandinavia.

In 2015, a Biker Mice from Mars mobile game was released by 9thImpact for iOS and Android devices through the App Store and Google Play Store. The game is divided into episodes, each with a different storyline which unfolds as the player completes the levels. Commenting on the new game, series creator Rick Ungar said that Biker Mice fans would enjoy the snappy banter, classic catchphrases and irreverent satire that they would expect from the series, in addition to the non-stop action.

Marvel Comics published a three-issue series in the early 1990s. A fourth issue was solicited on the reader's page. Marvel UK published its own series. The whole American series and portions of the British series were published in Germany (also by Marvel UK) in 7 magazine-sized issues from 1994 to 1995.

All content from Kiddle encyclopedia articles (including the article images and facts) can be freely used under Attribution-ShareAlike license, unless stated otherwise. Cite this article:
Biker Mice from Mars Facts for Kids. Kiddle Encyclopedia.