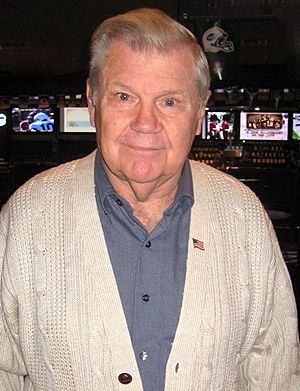 Robert "Bob" Hastings (April 18, 1925 – June 30, 2014) was an American movie, television, voice, stage, and radio actor who is known for his voice work as Commissioner James Gordon in Batman: The Animated Series.

Hastings was born on April 18, 1925 in Brooklyn, New York City. Hastings had been married to Joan Rice since the 1940s. They had four children. His brother was actor Don Hastings.

All content from Kiddle encyclopedia articles (including the article images and facts) can be freely used under Attribution-ShareAlike license, unless stated otherwise. Cite this article:
Bob Hastings Facts for Kids. Kiddle Encyclopedia.