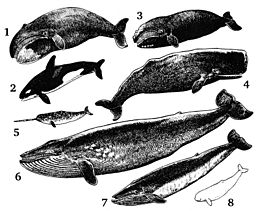 The order Cetacea /sᵻˈteɪʃiə/ includes the marine mammals commonly known as whales, dolphins, and porpoises. Cetus is Latin and is used in biological names to mean whale. Its original meaning, large sea animal, was more general. It comes from Ancient Greek κῆτος (kētos), meaning whale or "any huge fish or sea monster." In Greek mythology, the monster Perseus defeated was called Ceto, which is depicted by the constellation of Cetus. Cetology is the branch of marine science associated with the study of cetaceans.

Fossil evidence suggests that cetaceans share a common ancestor with land-dwelling mammals that began living in marine environments around 50 million years ago. Today, they are the mammals best adapted to aquatic life. The body of a cetacean is fusiform (spindle-shaped). The forelimbs are modified into flippers. The tiny hindlimbs are vestigial; they do not attach to the backbone and are hidden within the body. The tail has horizontal flukes. Cetaceans are nearly hairless, and are insulated from the cooler water they inhabit by a thick layer of blubber.

Some species are noted for their high intelligence. At the 2012 meeting in Vancouver, Canada, the American Association for the Advancement of Science (the world's largest science conference), support was reiterated for a cetacean bill of rights, listing cetaceans as non-human persons. 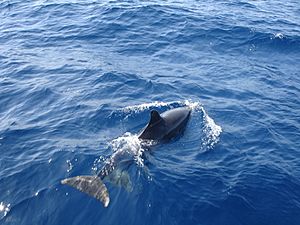 A dolphin in the Strait of Gibraltar

Cetaceans breathe air. They surface periodically to exhale carbon dioxide and inhale a fresh supply of oxygen. During diving, a muscular action closes the blowholes (nostrils), which remain closed until the cetacean comes to the surface; when it surfaces, the muscles open the blowholes and warm air is exhaled.

Cetaceans' blowholes have evolved to a position at the top of the head, simplifying breathing in sometimes rough seas. When the stale air, warmed from the lungs, is exhaled, it condenses as it meets colder external air. As with a terrestrial mammal breathing out on a cold day, a small cloud of 'steam' appears. This is called the 'blow' or 'spout' and varies by species in terms of shape, angle and height. Species can be identified at a distance using this characteristic.

Cetaceans can remain under water for much longer periods than most other mammals, (about seven to 120 minutes, varying by species) due to large physiological differences. Two studied advantages of cetacean physiology let this order (and other marine mammals) forage underwater for extended periods without breathing:

Cetacean eyes are set on the sides rather than the front of the head. This means only cetaceans with pointed 'beaks' (such as dolphins) have good binocular vision forward and downward. Tear glands secrete greasy tears, which protect the eyes from the salt in the water. The lens is almost spherical, which is most efficient at focusing the minimal light that reaches deep water. Cetaceans make up for their generally poor vision (with the exception of the dolphin) with excellent hearing.

Odontoceti (toothed whales, which includes dolphins and porpoises) are generally capable of echolocation. From this, Odontoceti can discern the size, shape, surface characteristics, distance and movement of an object. With this ability, cetaceans can search for, chase and catch fast-swimming prey in total darkness. Echolocation is so advanced in most Odontoceti, they can distinguish between prey and nonprey (such as humans or boats); captive Odontoceti can be trained to distinguish between, for example, balls of different sizes or shapes. Mysticeti (baleen whales) have exceptionally thin, wide basilar membranes in their cochleae without stiffening agents, making their ears adapted for processing low to infrasonic frequencies.

Cetaceans also use sound to communicate, whether it be groans, moans, whistles, clicks or the complex 'singing' of the humpback whale.

Besides hearing and vision, at least one species, the tucuxi or Guiana dolphin, is able to use electroreception to sense prey. 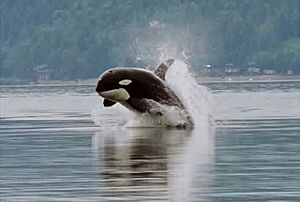 The toothed whales, such as the sperm whale, beluga, dolphins and porpoises, have teeth they use for catching fish, squid or other marine life. They do not chew, but swallow prey whole. When they catch large prey, such as when the killer whale (Orcinus orca) catches a seal, they bite off and swallow one chunk at a time.

Instead of teeth, Mysticeti have baleen plates made of keratin (the same substance as human fingernails), which hang from the upper jaw. These plates filter small animals (such as krill and fish) from the seawater. Cetaceans included in this group include the blue, humpback, bowhead and minke whales.

Not all Mysticeti feed on plankton; the larger species eat small shoaling fish, such as herring and sardines, called micronecton. The gray whale (Eschrichtius robustus), is a benthic feeder, primarily eating sea-floor crustaceans. 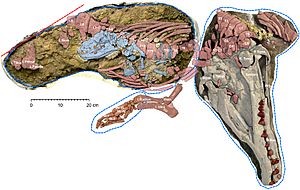 right}Fossil of a Maiacetus (red, beige skull) with fetus (blue, red teeth) shortly before the end of gestation

The order Cetacea contains about 90 species, all marine except for four species of freshwater dolphins. The order contains two suborders: Mysticeti (baleen whales) and Odontoceti (toothed whales, which includes dolphins and porpoises). The species range in size from Commerson's dolphin, smaller than a human, to the Blue Whale, the largest animal ever known to have lived.

Cetaceans are mammals, that is, members of the class Mammalia. Their closest living relatives are the even-toed ungulates, such as the hippopotamus and deer.

Mammalian characteristics include warm-bloodedness, breathing air through their lungs, suckling their young and growing hair, although very little of it.

Another way of distinguishing a cetacean from a fish is the shape of the tail. Fish tails are vertical and move from side to side when the fish swims. Cetacea tails — called a fluke — are horizontal and move up and down, because cetacea spines bend in the same manner as a human spine.

All content from Kiddle encyclopedia articles (including the article images and facts) can be freely used under Attribution-ShareAlike license, unless stated otherwise. Cite this article:
Cetacea Facts for Kids. Kiddle Encyclopedia.