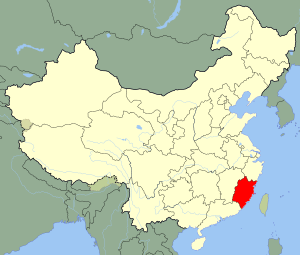 Fujian (Chinese: 福建; pinyin: Fú jiàn; ) is a province on the southeast coast of China. The capital is Fuzhou.

Fujian is separated from Taiwan by the 180km wide Taiwan Strait. Some of the small islands in the strait are also part of the province. Small parts of the province, namely the islands of Kinmen and Matsu, are under the administration of the Republic of China. The area of Fujian is about 121,400 square kilometers.

The People's Republic of China controls most of the province, and divides it into nine prefecture-level divisions.

All of these cities except Longyan, Sanming, and Nanping are found along the coast. 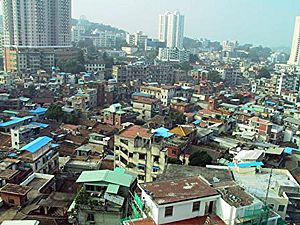 All content from Kiddle encyclopedia articles (including the article images and facts) can be freely used under Attribution-ShareAlike license, unless stated otherwise. Cite this article:
Fujian Facts for Kids. Kiddle Encyclopedia.