New Hampshire is a state in the New England region of the northeastern United States and was one of the Thirteen Colonies that revolted against British rule in the American Revolution. One of the smallest states in area and population, it was part of New England's textile economy between the Civil War and World War II, and in recent decades is known for its presidential primary, outdoor recreation, and being part of the computer and biotech industry centered around Boston, Massachusetts.

The colony that became the state of New Hampshire was founded on the division in 1629 of a land grant given in 1622 by the Council for New England to Captain John Mason (former governor of Newfoundland) and Sir Ferdinando Gorges (who founded Maine). The colony was named New Hampshire by Mason after the English county of Hampshire, one of the first Saxon shires. Hampshire was itself named after the port of Southampton, which was known previously as simply "Hampton".

New Hampshire was first settled by Europeans at Odiorne's Point in Rye (near Portsmouth) by a group of fishermen from England under David Thompson in 1623, just three years after the Pilgrims landed at Plymouth. Early historians believed the first native-born New Hampshirite, John Thompson, was born there.

Fisherman David Thompson had been sent by Mason, to be followed a few years later by Edward and William Hilton. They led an expedition to the vicinity of Dover, which they called Northam. Mason died in 1635 without ever seeing the colony he founded. Settlers from Pannaway, moving to the Portsmouth region later and combining with an expedition of the new Laconia Company (formed 1629) under Captain Neal, called their new settlement Strawbery Banke. In 1638 Exeter was founded by John Wheelwright.

In 1631, Captain Thomas Wiggin served as the first governor of the Upper Plantation (comprising modern-day Dover, Durham and Stratham). All the towns agreed to unite in 1639, but meanwhile Massachusetts had claimed the territory. In 1641 an agreement was reached with Massachusetts to come under its jurisdiction. Home rule of the towns was allowed. In 1653 Strawbery Banke petitioned the General Court of Massachusetts to change its name to Portsmouth, which was granted. 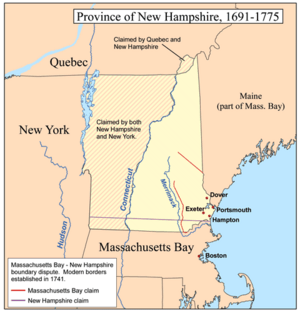 The province's geography placed it on the frontier between British and French colonies in North America, and it was for many years subjected to native claims, especially in the central and northern portions of its territory. Because of these factors it was on the front lines of many military conflicts, including King William's War, Queen Anne's War, Father Rale's War, and King George's War. By the 1740s most of the native population had either been killed or driven out of the province's territory.

Because New Hampshire's governorship was shared with that of Massachusetts, border issues between the two colonies were not properly adjudicated for many years. These issues principally revolved around territory west of the Merrimack River, which issuers of the Massachusetts and New Hampshire charters had incorrectly believed to flow primarily from west to east. In the 1730s New Hampshire political interest led by Lieutenant Governor John Wentworth were able to raise the profile of these issues to colonial officials and the crown in London, even while Governor and Massachusetts native Jonathan Belcher preferentially granted land to Massachusetts interests in the disputed area. In 1741 King George II ruled that the border with Massachusetts was approximately what it is today, and also separated the governorships of the two provinces. Benning Wentworth in 1741 became the first non-Massachusetts governor since Edward Cranfield succeeded John Cutt in the 1680s.

Wentworth promptly complicated New Hampshire's territorial claims by interpreting the provincial charter to include territory west of the Connecticut River, and began issuing land grants in this territory, which was also claimed by the Province of New York. The so-called New Hampshire Grants area became a subject of contention from the 1740s until the 1790s, when it was admitted to the United States as the state of Vermont. 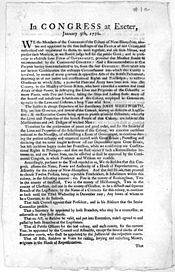 New Hampshire was one of the Thirteen Colonies that revolted with the British rule in the American Revolution. In January 1776, it became the first colony to set up an independent government and the first to establish a constitution, but the latter explicitly stated "we never sought to throw off our dependence on Great Britain", meaning that it was not the first to actually declare its independence (that distinction instead belongs to Rhode Island). The historic attack on Fort William and Mary (now Fort Constitution) helped supply the cannon and ammunition for the Continental Army that was needed for the Battle of Bunker Hill that took place north of Boston a few months later. New Hampshire raised three regiments for the Continental Army, the 1st, 2nd and 3rd New Hampshire regiments. New Hampshire Militia units were called up to fight at the Battle of Bunker Hill, Battle of Bennington, Saratoga Campaign and the Battle of Rhode Island. John Paul Jones' ship the Sloop-of-war USS Ranger and the frigate USS Raleigh were built in Portsmouth, New Hampshire, along with other naval ships for the Continental Navy and privateers to hunt down British merchant shipping.

Concord was named the state capital in 1808. 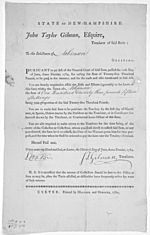 Map of the Republic of Indian Stream

In the 1830s, New Hampshire saw a major news story: the founding of the Republic of Indian Stream on its northern border with Canada over the unresolved post-revolutionary war border issue.

Abolitionists from Dartmouth College founded the experimental, interracial Noyes Academy in Canaan, New Hampshire in 1835. Rural opponents of the school eventually dragged the school away with oxen before lighting it ablaze to protest integrated education, within months of the school's founding.

Abolitionist sentiment was a strong undercurrent in the state, with significant support given the Free Soil Party of John P. Hale. However the conservative Jacksonian Democrats usually maintained control, under the leadership of editor Isaac Hill. In 1856 the new Republican Party headed by Amos Tuck produced a political revolution.

After Abraham Lincoln gave speeches in March 1860, he was well regarded. However, the radical wing of the Republican Party increasingly took control. As early as January 1861, top officials were secretly meeting with Governor John A. Andrew of Massachusetts to coordinate plans in case the war came. Plans were made to rush militia units to Washington in an emergency.

New Hampshire fielded 31,650 enlisted men and 836 officers during the American Civil War; of these, 1,803 enlisted men and 131 officers were killed or wounded. The state provided eighteen volunteer infantry regiments (thirteen of which were raised in 1861 in response to Lincoln's call to arms), three rifle regiments (who served in the 1st United States Sharpshooters and 2nd United States Sharpshooters), one cavalry battalion (the 1st New Hampshire Volunteer Cavalry, which was attached to the 1st New England Volunteer Cavalry), and two artillery units (the 1st New Hampshire Light Battery and 1st New Hampshire Heavy Artillery), as well as additional men for the Navy and Marine Corps.

Among the most celebrated of New Hampshire's units was the 5th New Hampshire Volunteer Infantry, commanded by Colonel Edward Ephraim Cross. Called the "Fighting Fifth" in newspaper accounts, the regiment was considered among the Union's best both during the war (Major General Winfield Scott called the regiment "refined gold" in 1863) and by historians afterward. The Civil War veteran and early Civil War historian William F. Fox determined that this regiment had the highest number of battle-related deaths of any Union regiment. The 20th-century historian Bruce Catton said that the Fifth New Hampshire was "one of the best combat units in the army" and that Cross was "an uncommonly talented regimental commander."

The critical post of state Adjutant General was held in 1861-64 by elderly politician Anthony C. Colby (1792-1873) and his son Daniel E. Colby (1816-1891). They were patriotic, but were overwhelmed with the complexity of their duties. The state had no track of men who enlisted after 1861; no personnel records or information on volunteers, substitutes, or draftees. There was no inventory of weaponry and supplies. Nathaniel Head (1828-1883) took over in 1864, obtained an adequate budget and office staff, and reconstructed the missing paperwork. As a result, widows, orphans, and disabled veterans received the postwar payments they had earned. 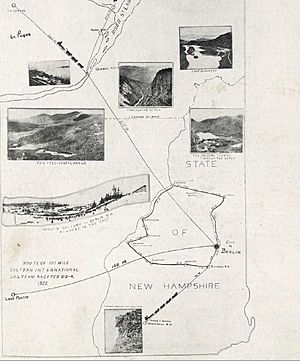 The textile industry was hit hard by the depression and growing competition from southern mills. The closing of the Amoskeag Mills in 1935 was a major blow to Manchester, as was the closing of the former Nashua Manufacturing Company mill in Nashua in 1949 and the bankruptcy of the Brown Company paper mill in Berlin in the 1940s, which led to new ownership.

The post-World War II decades have seen New Hampshire increase its economic and cultural links with the greater Boston, Massachusetts, region. This reflects a national trend, in which improved highway networks have helped metropolitan areas expand into formerly rural areas or small nearby cities.

The replacement of the Nashua textile mill with defense electronics contractor Sanders Associates in 1952 and the arrival of minicomputer giant Digital Equipment Corporation in the early 1970s helped lead the way toward southern New Hampshire's role as a high-tech adjunct of the Route 128 corridor.

The postwar years saw the rise of New Hampshire's political primary for President of the United States, which as the first primary in the quadrennial campaign season draws enormous attention.

All content from Kiddle encyclopedia articles (including the article images and facts) can be freely used under Attribution-ShareAlike license, unless stated otherwise. Cite this article:
History of New Hampshire Facts for Kids. Kiddle Encyclopedia.