Khaled Hadj Ibrahim (Arabic: خالد حاج إبراهيم‎code: ar is deprecated , born 29 February 1960), better known by his mononym Khaled (Arabic: خالد‎code: ar is deprecated ), is an Algerian musician, singer and songwriter born in Oran. He began recording in his early teens under the name Cheb Khaled (الشاب خالد, Arabic for "Young" Khaled, as opposed to the traditionalist Sheikh elders). He was crowned "King of Raï" in the first Raï festival in Oran and has since become the world's best-known Arab singers.

Khaled helped transform the rai music in his native Algeria, and then went on to make it a part of the global music scene. And with 10 diamond, platinum, and gold albums, as well as the highest-selling Arab album in history (123 Soleils), he's the star all other rai singers aspire to be. His most famous songs are "Didi", "El Arbi", "Abdel Kader (song)", "La Poupée qui fait non", "Wahran Wahran", "Bakhta", "Aïcha" and "C'est la vie" as well as "Alech Taadi", which was prominently featured in the 1997 film The Fifth Element.

Khaled was named top 50 Voices in the World by NPR.

To date, Khaled has sold over 80.5 million albums (10 diamond, platinum, and gold) worldwide.This turned him into one of the bestselling Arabic singing artists in history.

Khaled is considered one of the most-selling Arab singers of all time.

On 16 October 2003, Khaled was nominated Goodwill Ambassador of the Food and Agriculture Organization of the United Nations (FAO). 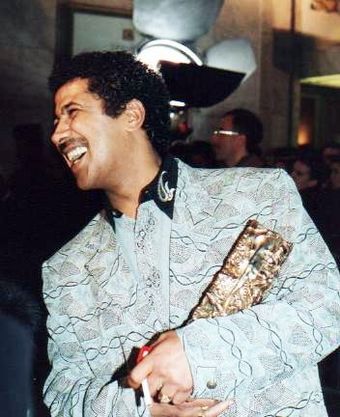 Khaled at the Caesar ceremony 1994.

Below is a chronological list of awards won by Khaled

All content from Kiddle encyclopedia articles (including the article images and facts) can be freely used under Attribution-ShareAlike license, unless stated otherwise. Cite this article:
Khaled (musician) Facts for Kids. Kiddle Encyclopedia.