Lists of state leaders by age facts for kids 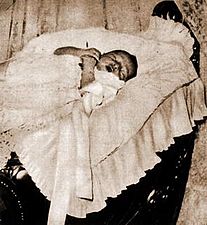 Since 1900, the youngest serving state leader has been 192-day-old Fuad II of Egypt (left), while the oldest has been 96-year-old Thai regent Prem Tinsulanonda (right).

This article contains various lists of state leaders organized by age, defined as heads of state and/or heads of government. Typically this list includes presidents, prime ministers or monarchs. There are approximately 360 current leaders.

People currently serving as head of state, representative of a Head of State, and/or head of government. There are approximately 360 current leaders.

Age at the time they took office ordered oldest first.

All content from Kiddle encyclopedia articles (including the article images and facts) can be freely used under Attribution-ShareAlike license, unless stated otherwise. Cite this article:
Lists of state leaders by age Facts for Kids. Kiddle Encyclopedia.