The Town of Manassa is the Statutory Town that is the most populous municipality in Conejos County, Colorado, United States. The town population was 991 at the 2010 United States Census.

This small town is surrounded by farms and ranches, with a small amount of residential development on its outskirts. A mostly agricultural community, there are few business establishments in the town. A small-town feel abounds with no traffic control signals or stop lights.

Today, approximately half of Manassa's residents are of Spanish and Mexican heritage. Migration patterns demonstrate how people from northern New Mexico settled this area in the mid 19th century. Many are the descendants of colonists from the Spanish colonial period beginning in 1598 with Juan de Oñate's colonization of New Mexico. Most of the other citizens of Manassa are the descendants of the Mormon pioneers who founded Manassa in 1879, and named the town after Manasseh, a son of the Israelite Joseph.

Manassa was located a short distance from two ranches purchased by the Mormons from Hispanos on the south side of the Conejos River, across from Los Cerritos.

The selection of the land for the colony was made on the assurance that the railroad would soon be built nearby. However, one year later the railroad bypassed the colony, and instead passed through Romeo, just 3 miles (5 km) to the west.

Manassa's elevation is 7,683 feet (2,342 m) above sea level. The land within Manassa city limits is entirely flat, with rolling hills nearby. Foothills and mountains (taller than 14,000 feet (4,300 m)) are farther in each direction, including the Sangre de Cristo Range to the east and the San Juan Mountains to the west.

According to the United States Census Bureau, the town has a total area of 0.93 square miles (2.4 km2), all of it land.

There were 362 households out of which 41.2% had children under the age of 18 living with them, 59.1% were married couples living together, 13.5% had a female householder with no husband present, and 22.4% were non-families. 20.7% of all households were made up of individuals and 9.1% had someone living alone who was 65 years of age or older. The average household size was 2.88 and the average family size was 3.33. 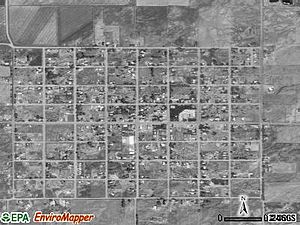 Satellite photograph showing the layout of Manassa's streets. Farmland and ranches abound in all directions, giving way to foothills and high mountains.

Manassa's wide streets, such as those typically found elsewhere in towns started by Mormons, are fashioned in a grid system. The town fits perfectly in a township and comprises close to one square mile made up of eight blocks by eight blocks for a total of 64 city blocks. From east to west, the streets are numbered First through Ninth. From south to north, the streets are named South, Jack, Morgan, Smith, Main (aka State Highway 142), Berthelson, Peterson, Dotson, and North.

Travel connections to major cities are generally made at Colorado Springs, Denver, or Albuquerque. With daily flights to Denver, the nearest commercial airport is in Alamosa 24 miles (39 km) to the north. Alamosa, with a population of about 8,500, is the home of Adams State University and is also the main trading center for the San Luis Valley.

The community-at-large, and people from all over the San Luis Valley and beyond, celebrate Manassa Pioneer Days with a parade on two days, horse races, rodeo, motorcross races, demolition derby, fireworks, entertainment, barbecues, and 5K run. A carnival at Pioneer Days brings the Tilt-a-Whirl, bumper cars, a merry-go-round and other midway rides. Bandstand entertainment and vendor booths line Manassa's city park on Main Street.

One of the oldest festivals in the state, the 132nd annual celebration was held in 2011 and is an annual event. The weekend-long affair is held on the weekend closest to July 24, in honor of the arrival of Brigham Young and fellow members of the Church of Jesus Christ of Latter-day Saints in Utah's Great Salt Lake Valley on July 24, 1847. The Mormon pioneers, as they were commonly known, left their settlement in Nauvoo, Illinois, and journeyed west seeking refuge from religious persecution.

Each year, attendance at Manassa's Pioneer Days is estimated at close to 10,000 per day, with people coming from many parts of the country to visit family and friends and to enjoy the festivities. 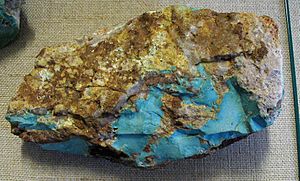 Massive turquoise in matrix with quartz from a mine in Mineral Park, Arizona

Manassa turquoise is mined east of Manassa. It is known for its blue-green to green color with a golden or brown, non-webbed matrix. The Manassa mine is still in production and owned by the King family, thus the alternate name sometimes used for this turquoise. This stone is a favorite of many; the beautiful green color is very striking, excellent when used in gold.

This site, originally mined by Ancestral Pueblo peoples, was rediscovered in 1890 by gold prospector I.P. King, and his descendants still work the claim. King's Manassa turquoise is best known for its brilliant greens and golden matrices, but blue and blue-green turquoise was found amid these deposits as well.

The Manassa area has long been known for its beautiful silver and turquoise jewelry and also for the production of fine pewter items.

While some turquoise has been mined in the low hills east of Manassa, most of the jewelry industry in Manassa, and nearby, has utilized and polished the raw turquoise found in the copper and silver mines of Arizona and Nevada. Additionally, coral from the seas and other semiprecious cabochons and cut stones have been added to silver and gold jewelry.

All content from Kiddle encyclopedia articles (including the article images and facts) can be freely used under Attribution-ShareAlike license, unless stated otherwise. Cite this article:
Manassa, Colorado Facts for Kids. Kiddle Encyclopedia.