Nailsea is a town in the unitary authority of North Somerset in the ceremonial county of Somerset, England, approximately 8 miles (13 km) southwest of Bristol and about 11 miles (18 km) northeast of the seaside resort of Weston-super-Mare. The nearest village is Backwell, which lies south of Nailsea on the opposite side of the Bristol to Exeter railway line. Nailsea is a commuter town with a population of 15,630.

The town was an industrial centre based on coal mining and glass manufacture, which have now been replaced by service industries. The surrounding North Somerset Levels has wildlife habitats including the Tickenham, Nailsea and Kenn Moors biological Site of Special Scientific Interest and Bucklands Pool/Backwell Lake Local Nature Reserve. Nailsea is close to the M5 motorway and Bristol Airport, and its railway station, Nailsea and Backwell, has services operated by First Great Western.

Secondary education is provided by Nailsea School (rebuilt as an Academy in 2009), and primary education by St Francis School, Grove School, Kingshill School and Golden Valley. Churches include the 14th-century Holy Trinity Church and Christ Church, which was built in 1843. 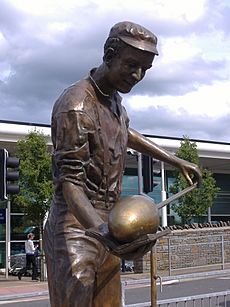 The statue of a glassblower near the site of the glassworks.

The name of the town may be derived from the Old English for Naegl's island, although it has also been suggested it was spelt Naylsey in 1657.

The parish of Nailsea was part of the Portbury Hundred. Little is known of the area occupied by Nailsea before the coal mining industry began, although it was used as a quarry in Roman times from which pennant sandstone was extracted. The Romans otherwise ignored Nailsea from 40–400 AD, but left a small villa near Jacklands Bridge.

Nailsea's early economy relied on coal mining, which began as early as the 16th century. The earliest recorded date for coal mining in Nailsea was 1507 when coal was being transported to light fires at Yatton. By the late 1700s the town had a large number of pits. Around this time Nailsea was visited by the social reformer Hannah More who founded a Sunday school for the workers. The Elms Colliery,(Middle Engine Pit), one of the most complete examples of an 18th-century colliery left in England, is now in disrepair. It has been designated a Scheduled Ancient Monument and is included in the Heritage at Risk Register produced by English Heritage. Remains of the old pits, most of which had closed down by the late 19th century as mining capital migrated to the richer seams of South Wales, are still visible around the town.

The coal mines attracted glass manufacturer John Robert Lucas, who in 1788 established the Nailsea Glassworks that became the fourth-largest of its kind in the United Kingdom, mostly producing low-grade bottle glass. The works closed down in 1873, but "Nailsea" glass (mostly made by glass workers at the end of their shift in Nailsea and at other glass works) is still sought after by collectors around the world. The site of the glass works has been covered by a Tesco supermarket car park, leaving it relatively accessible for future archaeological digs. Other parts of the site have been cleared and filled with sand to ensure that the remains of the old glass works are preserved.

The 15th-century Nailsea Court, southwest of the town, is a Grade I listed building. 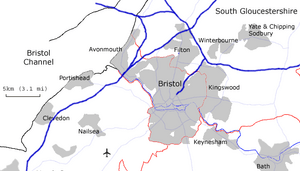 The Land Yeo river flows to the east of the town. The North Somerset Levels to the west have been drained and farmed by generations of farmers. Tickenham, Nailsea and Kenn Moors SSSI is a 129.4 hectare biological Site of Special Scientific Interest. The soils in the area include clays of the Allerton and Wentloog Series and peat soils of the Sedgemoor and Godney Series, which are drained by a network of large rhynes and smaller field ditches, which support exceptionally rich plant and invertebrate fauna communities. Exceptional populations of Coleoptera occur, amongst which are at least 12 nationally scarce species and 2 nationally rare species, including Britain’s largest water beetle the great silver water beetle (Hydrophilus piceus). There are several other local nature reserves.

The Bucklands Pool/Backwell Lake Local Nature Reserve, southeast of the town centre and close to the Nailsea and Backwell railway station, was constructed as a balancing pond in the mid-1970s, and has since become home to various wildfowl and dragonflies and a foraging area for bats. Bird species seen on the reserve include gadwall, shoveller, pochard, tufted duck, grey heron and mute swans.

Nearby towns and villages include Backwell, Wraxall, Portishead, Clevedon, and Tickenham. Nailsea is 8 miles (13 km) from the centre of Bristol, and close to the tourist centres of Weston super Mare and Bath. It is 8.5 miles (14 km) by road from the port and service area at Avonmouth. 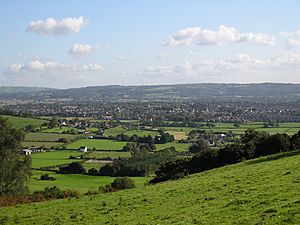 In common with the rest of South West England, Nailsea has a temperate climate which is generally wetter and milder than the rest of the country. The annual mean temperature is approximately 10 °C (50 °F). Seasonal temperature variation is less extreme than most of the United Kingdom because of the adjacent sea temperatures. The summer months of July and August are the warmest, with mean daily maxima of approximately 21 °C (70 °F). In winter mean minimum temperatures of 1 °C (34 °F) or 2 °C (36 °F) are common. In summer the Azores high pressure affects the south-west of England, although convective cloud sometimes forms inland and reduces the number of hours of sunshine. Annual sunshine rates are slightly less than the regional average of 1,600 hours. In December 1998 there were 20 days without sun recorded at Yeovilton. Most of the rainfall in the south-west is caused by Atlantic depressions or by convection. Most of the rainfall in autumn and winter is caused by the Atlantic depressions, which is when they are most active. In summer, a large proportion of the rainfall is caused by the Sun heating the ground leading to convection and to showers and thunderstorms. Average rainfall is around 700 mm (28 in). About 8–15 days of snowfall is typical. November to March have the highest mean wind speeds, and June to August have the lightest winds. The predominant wind direction is from the south-west.

Nailsea has several pubs and used to have a small nightclub called Decades, formerly known as the AJ's Bar. There are dedicated youth clubs and two Scouting divisions, which organise the Nailsea Carnival and Mayfair respectively. Nailsea has theatre, musical and orchestral groups. Most are open to all ages and meet and perform regularly at different venues including The Scotch Horn Centre, Nailsea Methodist Church, The Mizzymead Centre, The Grove Recreation Centre, and Nailsea Little Theatre. Nailsea's outdoor recreational areas include the playing fields by the Grove Centre and the public park to the rear of the Scotch Horn Centre and Tesco. There are three children's play parks and smaller areas of green land in the town's housing estates. The Scotch Horn Park contains a skate park and children's play park. There are no cinemas in Nailsea, but The Curzon in nearby Clevedon has been operating since 1912.

The adjacent village of Wraxall has a couple of tourist attractions. Noah's Ark Zoo Farm has displays of exotic, agricultural and domestic animals including rhinoceros, camels, monkeys, reptiles and most recently a giraffe. It offers hands-on experience with animals and a chance to learn about conservation. Tyntesfield, a 19th-century Victorian country house and grounds, was bought and opened up by the National Trust in 2002. An edition of the North Somerset Times is published as the Nailsea Times.

Nailsea has a popular carnival annually which has been held since the 1960s, in which all of the local schools and Scouts participate. It also holds a very popular beer & cider festival also held annually, usually during the weekend on the second or third week of July at Nailsea and Backwell Rugby Football Club which started in 2004. The festival holds over 160 local brews every year 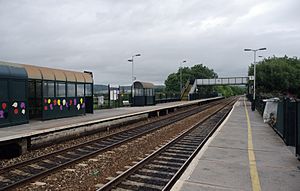 The principal road serving Nailsea is the B3130. It leads westwards to Clevedon, where the motorway network can be accessed at Junction 20 of the M5; eastwards it links with the A370 (for Bristol) and the A38 (for Bristol Airport). Another link to the A370 at Backwell offers a route south and west for traffic to other local towns such as Weston-super-Mare. Nailsea’s main car parks are in Clevedon Road, Station Road and Link Road, all of which are free for the first three hours. Bus services in Nailsea are operated by First Bus. The main routes are the X8/9 which runs every 15 mins to Bristol jointly run by First and Abus, and the hourly A2 between Clevedon/Portishead and Weston-Super-Mare via Bristol Airport, which also serves the railway station.

Nailsea and Backwell railway station is on the edge of neighbouring Backwell. It is managed by Great Western Railway, who run all services from the station, but is only staffed for a few hours on busy mornings. Trains run seven days each week, with a weekday off-peak service of two trains per hour in each direction, running between Taunton and Cardiff Central or Weston-super-Mare and Bristol Parkway. Mornings and evenings see some direct services to and from London Paddington. Platform 1 (westbound) can only be accessed by steps, but Platform 2 (eastbound) can be reached either by steps or a 1 in 12 (8%) ramp. The station has a car park for 100 cars, but is due for expansion. Over 350,000 journeys are made from the station each year.

Bristol Airport is less than 10 miles (16 km) from the town centre. 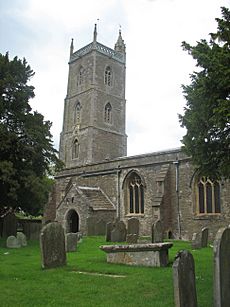 In the 2001 census 78% of Nailsea's respondents claimed Christianity as their religious preference; 16% claimed to have "no religious preference", the second largest group. All of the religious buildings are Christian in nature. Christ Church and the 14th-century Holy Trinity Church are Church of England parish churches. Christ Church was built in 1843 by George Gilbert Scott and William Bonython Moffatt and has been designated as a Grade II listed building. Holy Trinity features a tower with six Bells, a cemetery, and a community centre called "The Trinity Centre". It is Grade I listed.

Nailsea Methodist Church was founded in 1789; the first building opened three years later. In 1914 a new chapel was opened on Silver Street, and a youth club was added in the 1960s. In early 1992 the old church was replaced with a larger, flexible, multi-purpose building and the youth club was refurbished and renamed the Wesley Centre after Methodism’s founder, John Wesley. There is also Nailsea Baptist Church, the Catholic Church of St Francis of Assisi, Southfield Church, the United Reformed Church and the Community Church.

All content from Kiddle encyclopedia articles (including the article images and facts) can be freely used under Attribution-ShareAlike license, unless stated otherwise. Cite this article:
Nailsea Facts for Kids. Kiddle Encyclopedia.