Prisoner of war facts for kids 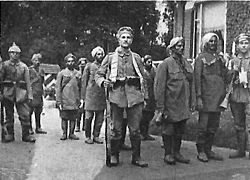 Soldiers from India, prisoners of Germany in World War I

A prisoner of war (short form: POW) is a fighter who has been captured by the forces of the enemy, during an armed conflict. In past centuries, prisoners had no rights. They were usually killed or forced to be slaves. Nowadays prisoners of war have rights that are stated in the Geneva Conventions and other laws of war.

The Third Geneva Convention gives prisoners of war many different rights. Here are some examples: 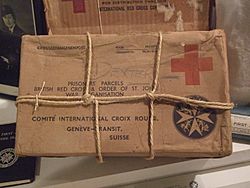 POWs have the right to get packages, like this British Red Cross parcel from World War II

If they are very sick or hurt, prisoners of war have the right to be let go. After a war ends, all POWs must be let go quickly.

Prisoners of war also have the right NOT to:

Not every prisoner gets these rights

Not all people who are caught while fighting wars are "prisoners of war." The Third Geneva Convention has a strict definition of what a prisoner of war is. For example, it says that to be "prisoners of war," soldiers MUST:

This caused controversy in the early 21st century. For example, in June 2002, the United States was fighting the War in Afghanistan. The Secretary of Defense, Donald Rumsfeld, announced that the people the U.S. had captured were "unlawful combatants [who] do not have any rights under the Geneva Convention[s]." The U.S. said these people were unlawful combatants, not prisoners of war, because:

The U.S. brought some of these people to a prison in Guantánamo Bay. Because they were enemy combatants, the inmates at Guantánamo did not get the rights that the Geneva Conventions give to prisoners of war.

Before the 20th century

All content from Kiddle encyclopedia articles (including the article images and facts) can be freely used under Attribution-ShareAlike license, unless stated otherwise. Cite this article:
Prisoner of war Facts for Kids. Kiddle Encyclopedia.