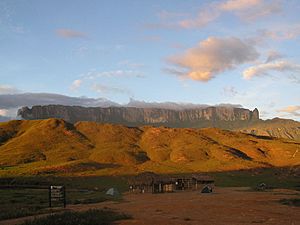 A plateau is an area of raised land that is flat on top. The biggest, tallest plateau in the world is the Tibetan Plateau. A plateau with a lot of erosion is called a dissected plateau. A plateau that is also a volcano is called a volcanic plateau. Some plateaus are under the ocean, like the Seychelles plateau or the Ontong Java Plateau. Plateaus are often by themselves with no other plateaus around, sometimes standing on top of mountains.

All content from Kiddle encyclopedia articles (including the article images and facts) can be freely used under Attribution-ShareAlike license, unless stated otherwise. Cite this article:
Plateau Facts for Kids. Kiddle Encyclopedia.