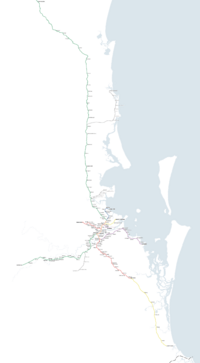 Queensland Rail operates ten suburban lines and three interurban lines. Centring in the Brisbane City, it extends as far as Gympie in the north, Varsity Lakes in the south, Rosewood in the west, and Cleveland in the east to Moreton Bay.

Each line is ascribed a colour and name on all Queensland Rail signage and marketing collateral including timetables, posters and maps. There are 153 stations in the Queensland Rail City network. 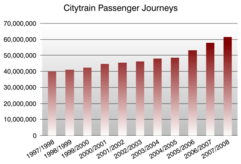 The Brisbane and south east corner of Queensland has experienced significant population growth, with approximately one million more people living in the area over the last 20 years and a forecast population of more than 3.8 million by 2026. This growth, along with a heightened awareness of the environment and increasing petrol prices, has placed an unprecedented demand on public transport and its infrastructure; Citytrain has reported successive patronage increases of 9% in both the 2005–2006 and 2006–2007 financial years, and a 6.6% increase in the 2007–2008 financial year.

To respond to this demand, the Government of Queensland created the South East Queensland Infrastructure Plan and Program to manage the investment in new transport infrastructure, amongst other areas. QR, in response, created the SEQIPRAIL office to manage and deliver rail components of the plan.

A third track was laid between Salisbury and Kuraby stations, a length of 9.5 km (5.9 mi). Previously two tracks, the added capacity allows Gold Coast line services to operate with less chance of delays. Seven railway stations along the section were significantly upgraded. The project was commissioned on 2 March 2008.

A second track was laid between Mitchelton and Keperra railway station, including an upgrade to the intermediate stations, Oxford Park and Grovely. Upgraded with two platforms, this upgrade allows additional services to operate on the line during peak hour, and will also remove waiting times outbound from Mitchelton and inbound from Keperra. Other improvements include lifts and footbridges, to meet the Disability Standards for Accessible Public Transport, and new, modern station buildings. The further duplication of the railway between Keperra and Ferny Grove stations, plus an additional platform and parking at Ferny Grove has been completed.

The line between Ormeau and Coomera stations, 6.7 km (4.2 mi) in length, was duplicated in October 2006, allowing for additional capacity. Similarly, the 16.6 km (10.3 mi) length between Helensvale and Robina stations is being duplicated, and should remove the need for a four-minute layover at Helensvale for Robina services to wait for the Brisbane service due to the single track either side of the station. It was completed on July 2008.

5.2 km (3.2 mi) of track between Corinda and Darra stations is to be triplicated. Currently four tracks to Corinda then two to Ipswich, the triplication will allow for greater capacity, especially with the proposed Springfield railway line to branch from Darra station. The project is in the design phase, with no construction start date at present. However, the project has been scheduled to be completed no later than late 2016.

13.7 km (8.5 mi) of track north of Caboolture station to Beerburrum station has been doubled and straightened, along with the upgrading of Elimbah and Beerburrum stations. Construction work began in 2007, and the project was commissioned on 14 April 2009.

From Beerburrum station, 17 km (11 mi) of track to Landsborough is proposed to be similarly doubled and straightened. This project is in the concept stage, with no construction nor completion dates at present.

The Maroochydore railway line (or CAMCOS, Caloundra and Maroochydore Corridor Options Study), is a proposed single track line due for construction and progressive completion in stages between 2015 and 2020. It will branch from the existing Sunshine Coast line after Beerwah railway station, with completion to Caloundra by 2015, and Maroochydore by 2020.

The Redcliffe Peninsula railway line (previously known as the Moreton Bay Rail link) is a much-proposed suburban railway line extending 27.5 km (17.1 mi) north-northwest from Brisbane central business district (approximately 40.1 km (24.9 mi) from Central station. The line would be part of the QR Citytrain network, branching from the existing Caboolture line immediately after Petrie railway station, and extend to the Redcliffe peninsula. It was more seriously identified and anticipated in the 1970s, and the land was purchased in the 1980s although the line was not built. Construction commenced in 2013 and the line was opened to passengers on 4 October 2016.

On 26 August 2007 the then-Minister for Transport and Main Roads, Paul Lucas, announced the Inner City Rail Capacity Study to look at underground rail access under the Brisbane central business district. Dismissing a City Loop-style scenario similar to Melbourne, citing the relatively small size of the CBD and "technical and operational constraints", Lucas imagined an underground line from Park Road station to Woolloongabba, then across the Brisbane River to connect with the Exhibition railway line, with major new stations at Woolloongabba, Gardens Point/QUT, and in the CBD. The study will also investigate the feasibility of the Exhibition line operating all year with new stations, and the upgrading of existing lines with additional tracks. Lucas allocated A$5 million to the study and appointed AECOM and Parsons Brinckerhoff as consultants to "look at options for boosting rail capacity in the city centre, including potential for an underground tunnel".

All content from Kiddle encyclopedia articles (including the article images and facts) can be freely used under Attribution-ShareAlike license, unless stated otherwise. Cite this article:
Rail network in South East Queensland Facts for Kids. Kiddle Encyclopedia.