Sports in Detroit facts for kids 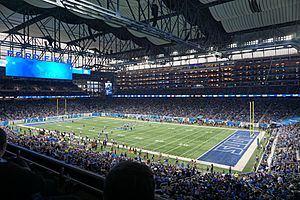 Detroit is home to four professional U.S. sports teams; it is one of twelve cities in the United States to have teams from the four major North American sports. Since 2017, it is the only U.S. city to have its MLB, NFL, NBA, and NHL teams play within its downtown district (broadly defined) and one of only four U.S. cities to have said teams play within the city limits of their namesake.

In college sports, the University of Detroit Mercy has an National Collegiate Athletic Association (NCAA) Division I program. Wayne State University has a Division II program, and once had Division I teams in men's and women's ice hockey but has since dropped both sports. The NCAA football Quick Lane Bowl is held at Ford Field each December. 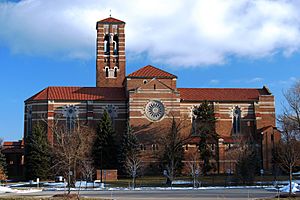 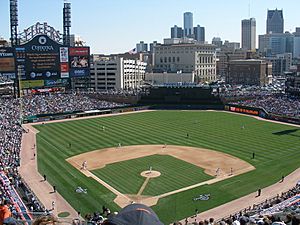 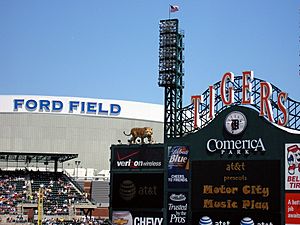 Ford Field next to Comerica Park.

The Detroit Marathon is also organized annually in the city, usually held in October.

Detroit is home to the Detroit Indy Grand Prix. The race took place on the streets of downtown Detroit from 1982 until 1988, and then from 1989 (when the sanction moved from Formula One to IndyCars) at Belle Isle until now. The race was not held from 2002−2006.

The Virginia Slims of Detroit was a WTA Tour women's tennis tournament held from 1972 to 1983, which featured top ranked players such as Margaret Court, Billie Jean King, Chris Evert and Martina Navratilova.

The city hosted the Red Bull Air Race in 2008 on the International Riverfront.

* In 1967, Detroit was selected as one of the cities to adopt a European professional soccer club in a bid to promote the game Stateside. The event was planned to coincide with Europe's off/close season when the teams would have otherwise been dormant for the summer. Detroit was represented by the Northern Irish team Glentoran, playing as the Detroit Cougars.

Comerica Park is home of the American League Detroit Tigers.

The following table shows the NCAA Division I and Division II college sports programs in the metro Detroit area:

There are also numerous small college athletic programs in the Detroit Metro area.

On December 13, 2003, what was then the largest verified crowd in basketball history (78,129) packed Ford Field to watch the University of Kentucky defeat Michigan State University, 79–74. Ford Field hosted the Final Four of the 2009 NCAA Men's Division I Basketball Tournament.

The Frozen Four, the term for the semifinals and final of the NCAA Division I Men's Ice Hockey Tournament, was held at Ford Field on April 8 and 10, 2010.

All content from Kiddle encyclopedia articles (including the article images and facts) can be freely used under Attribution-ShareAlike license, unless stated otherwise. Cite this article:
Sports in Detroit Facts for Kids. Kiddle Encyclopedia.