For the type of music, please see St. Louis blues.

The St. Louis Blues are a professional ice hockey team based in St. Louis. They compete in the National Hockey League (NHL) as a member of the Central Division of the Western Conference. The franchise was founded in 1967 as one of the six teams from the 1967 NHL expansion and is named after the W. C. Handy song "Saint Louis Blues". The Blues play their home games at the 19,150-seat Enterprise Center in downtown St. Louis, which has been their arena since moving from St. Louis Arena in 1994.

The Blues have a rivalry with the Chicago Blackhawks, with both teams having played in the same division since 1970. The San Antonio Rampage of the American Hockey League (AHL) and the Tulsa Oilers of the ECHL are the two minor league affiliates of the Blues.

In their first years, they had a good team because of experienced players such as goaltender Glenn Hall. In 1968 Glenn Hall won the Conn Smythe Trophy as most valuable player in the playoffs. But the team did not win in 1968. They had some trouble in the 1970s. In 1980-81 Mike Liut was named best goalie in the NHL. The 1980s were a good decade for the Blues. Mike Liut, Bernie Federko, Doug Gilmour, and Joe Mullen were all important players for the team in the 1980s. 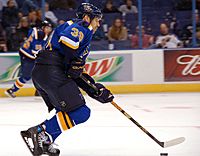 The 1990s also were a good decade. Brett Hull led the NHL in goals in 1990, 1991, and 1992, with the help of centre Adam Oates. Hull is the son of Chicago Blackhawks star Bobby Hull. Brett Hull won the Hart Trophy as most valuable player in 1991. Curtis Joseph was a strong goaltender in the 1990s. Al MacInnis (1999) and Chris Pronger (2000) each won the Norris Trophy for best defence; Pronger also won the Hart Trophy in the year 2000. Doug Weight, Pavol Demitra, and Keith Tkachuk were also strong players in the early 21st century.

All content from Kiddle encyclopedia articles (including the article images and facts) can be freely used under Attribution-ShareAlike license, unless stated otherwise. Cite this article:
St. Louis Blues Facts for Kids. Kiddle Encyclopedia.