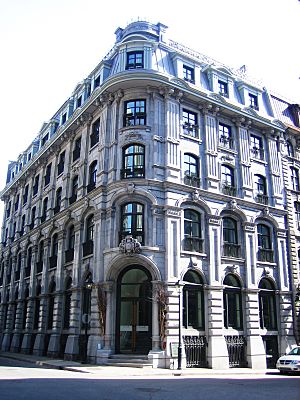 Young Men's Christian Association (or the YMCA or the Y) is an organization headquartered in Geneva, Switzerland. It was originally meant to put Christian principles into practice. It was founded in 1844 in London, England, United Kingdom. At first, the organization provided beds and shelter to young men leaving the countryside for work in the cities. It promotes Muscular Christianity.

Basketball was invented in an American YMCA.

The similar Young Women's Christian Association or YWCA was founded in 1870.

All content from Kiddle encyclopedia articles (including the article images and facts) can be freely used under Attribution-ShareAlike license, unless stated otherwise. Cite this article:
YMCA Facts for Kids. Kiddle Encyclopedia.