Brattleboro (/ˈbrætəlˌbəroʊ/), originally Brattleborough, is a town in Windham County, Vermont, United States. The town is located in the southeast corner of the state along the state line with New Hampshire. The population is 11,765 according to the U.S. Census Bureau's 2014 estimates. It is the most populous municipality along Vermont's eastern border and is situated on the west bank of the Connecticut River at the point where Vermont's West River flows into it.

Marlboro College Center for Graduate and Professional Studies and SIT Graduate Institute are located in the town. There are satellite campuses of three colleges as well: Community College of Vermont, Union Institute and University, and Vermont Technical College. The town is home to the New England Center for Circus Arts and the Vermont Jazz Center.

The Brattleboro Retreat, a not-for-profit mental health and addictions psychiatric hospital, is also located in the town. 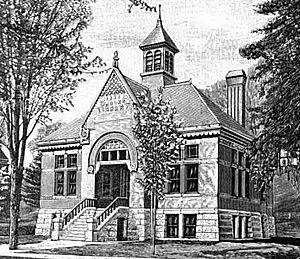 Because Native Americans in the region tended to name places and regions after their rivers or watersheds, the site of today's Brattleboro, the confluence of the West River and the Connecticut River, was called 'Wantastiquet' by the Abenaki people, a name meaning, according to various translations, "lost river", "river that leads to the west", or "river of the lonely way". Today known only by its English-translated name, the West River remains demarcated by New Hampshire's towering Mount Wantastiquet, directly opposite its mouth, and Lake Wantastiquet, near where it rises at its source. The Abenaki would transit this area annually between Missisquoi (their summer hunting grounds near the current-day town of Swanton) in northwestern Vermont, and Squakheag (their winter settlement or camps) near what is now Northfield, Massachusetts. The specific Abenaki band who lived here and traversed this place were called Sokoki, meaning "people who go their own way" or "people of the lonely way". The Abenaki's inclusive name for what is now Vermont was "Ndakinna" ("our land"), and in the 17th and 18th centuries, as more Europeans moved into the region, their often vigorous measures of self-defense culminated in Dummer's War (also known variously as Greylock's War, Three Years War, Lovewell's War, the 4th Indian War, and in Maine as Father Rasle's War). Most Abenaki allied with the French during this period, and following what is now known as the French and Indian War (1754–1763), they were largely driven north or fled into Quebec, further opening the way for English – and later United States – settlements in the area.

To defend the Massachusetts Bay Colony against Chief Gray Lock and others during Dummer's War, the Massachusetts General Court voted on December 27, 1723 to build a blockhouse and stockade on the Connecticut River near the site of what would later become known as Brattleboro. Lieutenant-governor William Dummer signed the measure, and construction of Fort Dummer began on February 3, 1724. It was completed before summer. On October 11 of that year, the French attacked the fort and killed some soldiers. In 1725, Dummer's War ended.

By 1728, and in subsequent peaceful periods, the fort served as a trading post for commerce among the colonial settlers and the Indians. But violence flared up from time to time throughout the first half of the 18th century. In 1744, what became known as King George's War broke out, lasting until 1748. During this period a small body of British colonial troops were posted at the fort, but after 1750 this was considered unnecessary.

Although the area was originally part of the Equivalent Lands, the township became one of the New Hampshire grants, and was chartered (founded) as such on December 26, 1753, by Governor Benning Wentworth. It was named Brattleborough, after Colonel William Brattle, Jr. of Boston, a principal proprietor. Ironically there is no record that Brattle ever visited the locality, and settlement activities remained tentative until after the 1763 Treaty of Paris, when France abandoned their claims to Vermont, part of the region which they had called New France.

Hostilities having ceased, Brattleboro developed quickly in peacetime, and soon was second to none in the state for business and wealth. In 1771, Stephen Greenleaf opened Vermont's first store in the east village, and in 1784, a post office was established. A bridge was built across the Connecticut River to Hinsdale, New Hampshire in 1804. In 1834, the Brattleboro Retreat, then called the Vermont Asylum for the Insane, was established through a generous bequest by Hinsdale, NH's Anna Marsh. In 1844 the Brattleboro Hydropathic Establishment was opened by Dr. Robert Wesselhoeft; this was the third 'water cure' establishment in the country, utilizing waters from a spring near the current downtown fire station. Until the "Water Cure" closed in 1871, the town was widely known as a curative health resort. 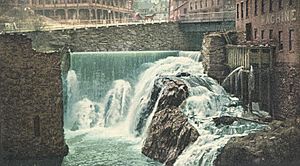 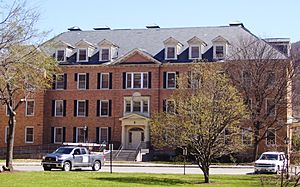 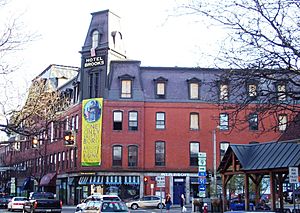 Brooks House, built in 1871 and originally a resort hotel, is the largest commercial building in Brattleboro. Devastated by a fire in 2011, it re-opened in the Fall of 2014

Whetstone Falls, very close to where Brattleboro's Whetstone Brook flows into the Connecticut River, was a handy source of water power for watermills, initially a sawmill and a gristmill. By 1859, when the population had reached 3,816, Brattleboro had a woolen textile mill, a paper mill, a manufacturer of papermaking machinery, a factory making melodeons, two machine shops, a flour mill, a carriage factory, and four printing establishments. Connected by the Vermont & Massachusetts Railroad and the Vermont Valley Railroad, the town prospered as a regional center for trade in commodities including grain, lumber, turpentine, tallow and pork. In 1888, the spelling of the town's name was shortened to Brattleboro.

The Estey Organ company, the largest organ manufacturer in the United States, operated in Brattleboro for about a century beginning in 1852. The company's main factory was located southwest of downtown Brattleboro, on the south side of Whetstone Brook between Birge and Organ Streets. At its height, the complex had more than 20 buildings, many of which were interconnected by raised walkways and covered bridges. One of the buildings now houses the Estey Organ Museum. The entire surviving complex was listed on the National Register of Historic Places in 1980, both for its architecture, and as a major economic force in Brattleboro for many years.

British author Rudyard Kipling settled in Brattleboro after marrying a young Brattleboro woman, Carrie Balestier, in 1892. The couple built a home called Naulakha (Rudyard Kipling House), just over the town line to the north in neighboring Dummerston. Kipling wrote The Jungle Book and other works there. He also wrote about local life in the early 1890s: heavy snowfalls, ox-teams drawing sledges, and people in the small towns beset with what he called a "terrifying intimacy" about each other's lives. He recorded the death of men who had left, going to seek their fortunes in the cities or out west, and the consequent loneliness and depression in the lives of local women; the long length of the workday for farmers, even in winter, often for lack of help; and the abandonment of farms.

The first person ever to receive a Social Security benefit check, issued on January 31, 1940 was Ida May Fuller from Brattleboro.

According to the United States Census Bureau, the town has a total area of 32.5 square miles (84.0 km2), of which 32.0 square miles (82.9 km2) is land and 0.5 square mile (1.2 km2, 1.42%) is water. Brattleboro is drained by the West River, Ames Hill Brook and Whetstone Brook. The town is in the Connecticut River Valley, and its eastern boundary (and the Vermont state line) is the western bank of the Connecticut River. Hills and mountains surround the town.

Brattleboro experiences a humid continental climate (Köppen Dfa) with cold, snowy winters and hot, humid summers. The town can experience snowfall as early as November and as late as April, and in the adjacent mountains and high country as late as May. Nor'easters often come with the potential of dumping a foot or more of snow on Brattleboro when they move through; such storms are not uncommon during the winter months. Summers are warm to hot and generally humid, with abundant sunshine and heavy showers and thunderstorms associated with passing cold fronts. Tornadoes are rare.

As of the census of 2010, there were 12,046 people, 5,364 households, and 2,880 families residing in the town. Almost all of the population is concentrated in two census-designated places identified in the town: Brattleboro and West Brattleboro. The results of the 2010 census indicate very little change in the overall number of people living in the town. Despite this, Brattleboro remains the most populous town along Vermont's eastern border.

There were 5,364 households out of which 27.2% had children under the age of 18 living with them, 37.8% were married couples living together, 12.8% had a female householder with no husband present, and 46.3% were non-families. 37.8% of all households were made up of individuals and 13.3% had someone living alone who was 65 years of age or older. The average household size was 2.15 and the average family size was 2.84. 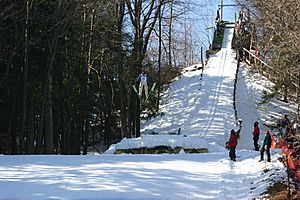 A contestant airborne on the Harris Hill Ski Jumping venue 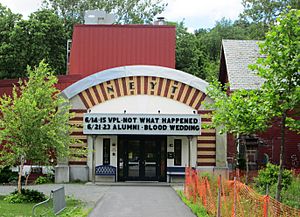 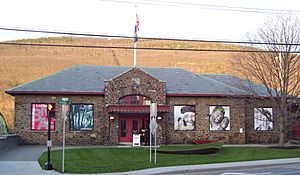 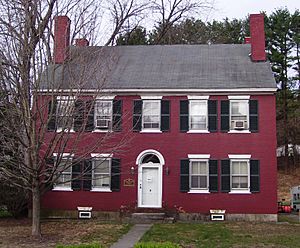 The Jeremiah Beal Museum of the Brattleboro Historical Society

Brattleboro has a thriving arts community. It was listed recently in John Villani's book The 100 Best Small Art Towns in America, in which it was ranked #9 among 'arts towns' with a population of 30,000 or under.

On the first Friday of every month, an event known as Gallery Walk is held, in which galleries, artists, and arts organizations open their doors to the public to display new work or hold performances. Included in the organizations that participate are the Brattleboro Museum and Art Center, the Hooker-Dunham Theater and Gallery, the In-Sight Photography Project, River Gallery School, Through the Music, and the Windham Art Gallery.

The town operates and maintains the Gibson-Aiken Center, a large recreation and community activities facility, located downtown on Main Street, along with a number of parks and outdoor recreation centers, including Living Memorial Park, whose features include an outdoor swimming pool and a municipal skiing facility. There are bicycle lanes on Putney Road in the northern portion of town, on Guilford Street near Living Memorial Park, and on a short segment of Western Avenue in West Brattleboro. Open during the summer months, Fort Dummer State Park is named for, and located near, the original site of a Dummer's War-era stockade. The state park consists of 218 acres of protected forest, featuring hiking trails and a State campground, just south of the population center on wooded hills overlooking the Connecticut River.

Brattleboro sees a substantial seasonal influx of recreational skiers and snowboarders, many of them bound for the resorts at nearby Mount Snow and Stratton, but it is also a winter sports destination in and of itself. The town played an important role in the development and popularization of the skiing industry as a winter sport, with pioneering Brattleboro native and Dartmouth College alumnus Fred Harris, founder of the Dartmouth Outing Club (1909–10), also establishing the Brattleboro Outing Club (in 1922), contributing to the first North American use of motor-driven ski lifts, and building the Harris Hill olympic-scale ski jumping facility, the site of international competitions every February that still attract daring ski-jumping athletes from all over the world.

All content from Kiddle encyclopedia articles (including the article images and facts) can be freely used under Attribution-ShareAlike license, unless stated otherwise. Cite this article:
Brattleboro, Vermont Facts for Kids. Kiddle Encyclopedia.