Kids Encyclopedia Facts
This page is about the science-fiction convention. For the Goth subculture festival, see Convergence (goth festival).

CONvergence is an annual multi-genre fan convention. This all-volunteer, fan-run convention is primarily for enthusiasts of Science Fiction and Fantasy in all media. Their motto is "where science fiction and reality meet". It is one of the most-attended conventions of its kind in North America, with approximately 6,000 paid members. The 2019 convention was held across four days at the Hyatt Regency Minneapolis in Minneapolis, Minnesota.

The convention is known for several attractions, which are available to members throughout the event. 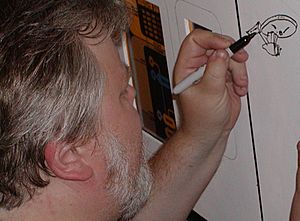 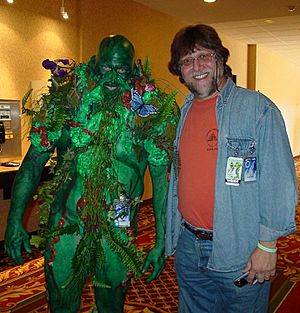 Members of CONvergence have access to ConSuite, with complimentary rice and soups throughout most of the day, and around-the-clock access to candies, veggies, fruits, and chips. Other hospitality rooms are also provided, such as the COF2E2 Coffee Shop, and the Volunteers Den with hot food for members who volunteer.

A panel of experts (including cartoonist John Kovalic, far left, and author Brian Keene, far right), debate who would win in a fight: Frankenstein's Monster or Cookie Monster.

CONvergence panels are scheduled for each day, across a wide range of topics. Most panels are group discussions in front of an audience, while others are more interactive or performance-based.

The Opening and Closing Ceremonies are held on a Main Stage, as well as live performances and other events that require a lot of space.

The signature Masquerade event is held Saturday night, displaying the best in costuming and cosplay creations, usually with short skits.

Live music sometimes occurs at the Main Stage. Dances and raves are often scheduled for the late hours in the main stage area.

The primary mascot of CONvergence is the gynoid "Connie", who is occasionally opposed by Connie's scheming younger sister, "Connie Mk. II". 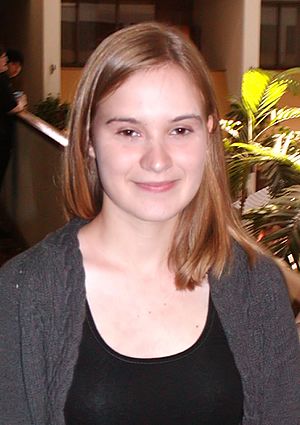 Like most science fiction conventions, CONvergence selects a few special guests every year.

The idea for CONvergence began at a room party held 24 years ago at the Minicon 33 event, where 500 pre-registrations to CONvergence 1999 were collected. The planning team celebrated the one-year-to-go mark with a picnic on the weekend of July 4, 1998.

All content from Kiddle encyclopedia articles (including the article images and facts) can be freely used under Attribution-ShareAlike license, unless stated otherwise. Cite this article:
CONvergence Facts for Kids. Kiddle Encyclopedia.