The Naugatuck River, which acts as the region's namesake, flows through the center of the region from Thomaston to Beacon Falls. The river begins at the confluence of Jakes Brook, Hart Brook, and Hall Meadow Brook in the western part of Torrington and flows 40 miles (64 km) before entering the Housatonic River in Derby. The Central Naugatuck Valley is one of three regions that comprises the Naugatuck River Valley, the others being the Lower Naugatuck Valley, also known as "The Valley", and the Upper Naugatuck Valley, which is part of the larger Litchfield Hills region. 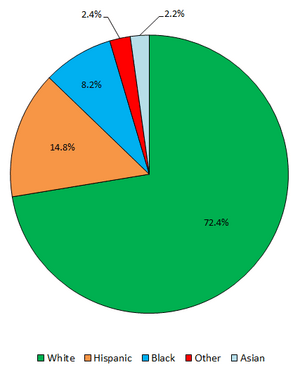 Racial and ethnic distribution in the Central Naugatuck Valley

In 2010, the total population of the Central Naugatuck Valley Region was 287,768, an increase of 15,174, or 5.6%, from 2000. The fastest growth occurred in the suburban towns of Oxford, Middlebury, and Beacon Falls, which each experienced a population growth of over 15%. Waterbury, with a population of 110,336, is the largest city in the region and fifth largest city in Connecticut. Naugatuck (31,862) and Cheshire (29,261), are the second and third largest municipalities in the region. Similar to state and national trends, the population of the Central Naugatuck Valley is becoming increasingly diverse. As of the 2010 U.S. Census, the racial makeup of the region was 79.4% White (72.4% non-Hispanic White), 9.2% Black or African American, 0.3% Native American, 2.2% Asian, 6.1% from other races, and 2.7% from two or more races. Hispanics or Latinos of any race were 14.8% of the region's population. Racial and ethnic minorities represented 20.6% of the region's population, a 34% increase from 2000. A vast majority (77%) of the region's minority population lives in Waterbury.

In 2010, there were 109,735 households in the region. 49.4% of households were made up of married couples living together, 26.4% were single-person households, 19.0% were headed by a single parent with no spouse present, and 5.2% were non-family households.

The top 10 largest ancestry groups in the region are: 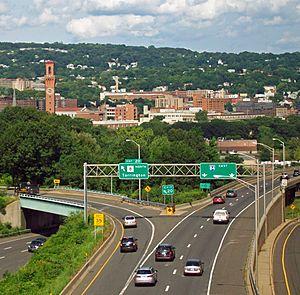 I-84, just west of downtown Waterbury

Interstate 84 and Route 8 serve as the primary highways in the region. Interstate 84 links the region with Hartford, and Boston to the east and Danbury, and New York State to the west. Route 8 is the major north-south highway in the region and connects with Torrington, and the Litchfield Hills to the north, and to the Lower Naugatuck Valley and Bridgeport to the south. A small segment of Interstate 691 is located in the town of Cheshire, and connects Interstate 84 to Interstate 91 and Connecticut Route 15.

Local bus service is provided by CT Transit through Northeast Transportation Company. Service is found primarily in Waterbury, and also extends into the neighboring towns of Cheshire, Middlebury, Naugatuck, Watertown, Wolcott. With the completion of the Hartford-New Britain Busway in 2014, a new express bus will run between Waterbury and Hartford. Peter Pan Bus Lines operates intercity buses out of Waterbury.

The Waterbury Branch of the Metro-North Railroad contains stations at Waterbury, Naugatuck, and Beacon Falls. With the exception of one morning express train to Stamford, all passengers must transfer at Bridgeport to Metro North, Shoreline East, or Amtrak trains. Travel time from Waterbury to Grand Central Terminal is approximately 2 hours and 20 minutes. The Railroad Museum of New England runs seasonal excursion trains on the Naugatuck Railroad from Thomaston to Waterbury and Torrington.

Waterbury-Oxford Airport, located in the town of Oxford, offers facilities for corporate, freight and recreational flights. As of 2010, the airport handled 137 aircraft operations per day.

Like all Connecticut towns, the towns in the Central Naugatuck Valley have strong home rule tradition. Although Connecticut is divided up into eight counties, these counties do not have a formal governments and lack administrative power over member towns. In its place, Connecticut is divided up into 9 planning regions who are responsible for regional transportation and land-use planning. The Naugatuck Valley Council of Governments (NVCOG) is the metropolitan planning organization for the region and acts as a forum where chief elected officials can discuss issues of common concern and to develop programs to address them on a regional level.

All content from Kiddle encyclopedia articles (including the article images and facts) can be freely used under Attribution-ShareAlike license, unless stated otherwise. Cite this article:
Central Naugatuck Valley Facts for Kids. Kiddle Encyclopedia.