The Dominican city of Concepción de la Vega, usually known as La Vega, is the head municipality of the La Vega province; it is the largest city in the central part of the country.

The carnival of La Vega, every year during February, is one of the most important carnival in the country. 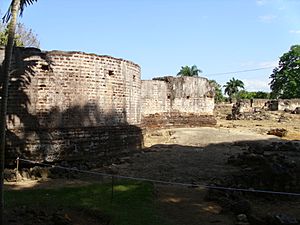 In 1494, Christopher Columbus built a small fort near what is today known of La Vega Vieja (the "Old La Vega"). Columbus gave the name of Concepción to the fort.

A small town grew around the fort and was known as Concepción de la Vega because it was in the western border of the main valley of the island ("Vega" means valley): the Cibao Valley or Royal Valley.

The city was destroyed by a strong earthquake in December of 1562; the town was rebuilt several kilometres to the south of the old one, on the southern side of the Camú river, where the city is now.

Concepción de la Vega is at 125 km (78 mi) to the northwest of Santo Domingo and at 36 km (22 mi) to the southeast of Santiago. The municipality is in the western side of the Cordillera Central ("Central mountain chain"), in the "Valle de la Vega Real" ("Royal Valley").

The Camú river flows along the northern side of the city; that river, one of the most important river of the country, is a left tributary of the Yuna river.

La Vega has a tropical wet climate (Köppen-Geiger classification: Af) with no dry or cold season as it is constantly moist (rainfalls during the whole year).

The municipality of La Vega has three municipal districts:

The most important economic activity in the province is farming; some important crops are plantain, rice, cacao; some vegetables are grown in the valley of the Camú river. Cattle raising is also important, mainly for milk.

There is also here an important Free Trade Zone, a place where there are different companies that made different products to send to other countries and do not pay taxes in the Dominican Republic.

All content from Kiddle encyclopedia articles (including the article images and facts) can be freely used under Attribution-ShareAlike license, unless stated otherwise. Cite this article:
Concepción de la Vega Facts for Kids. Kiddle Encyclopedia.