Culture of Dallas facts for kids

This article is about the culture of Dallas, Texas (USA). 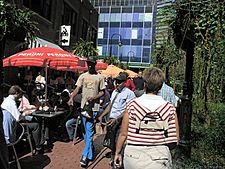 The City of Dallas is seen as right-wing politically, with a heavy cultural emphasis placed on Protestant Christianity and close historical and cultural ties to both the rugged American West and agricultural South.

The city has historically been predominantly white but its population diversified as it grew in size and importance over the 20th century. The largest ethnic minority group in the city is the Hispanics—Dallas is a major destination for Mexican immigrants seeking opportunity in the United States because it is relatively close, along with the rest of Texas, to the U.S.–Mexico border. The southwest area of the city, especially Oak Cliff, is predominantly or completely Hispanic. The southern areas of the city, especially Pleasant Grove, are predominantly Black. The eastern parts of the city are mostly white and the northwestern portion of the city is home to a fairly equal mix of Hispanics and Blacks. The city also contains localized populations of Chinese, Taiwanese, Korean, Thai, Indian, German, Middle Eastern, Polish, Russian and Jewish peoples. The Asian communities tend to reside in suburbs such as Plano, Irving, Carrollton, and Richardson as opposed to Dallas itself.

Dallas is renowned for barbecue, authentic Mexican and Tex-Mex cuisine. The Dallas area is home to large amounts of restaurants featuring cuisines from all over the world. Suburbs such as Plano, Irving, Carrollton, Richardson, and Arlington feature authentic Indian, Chinese, Korean, Vietnamese, African Cuisines, Taiwanese, and Persian foods. Famous products of the Dallas culinary scene include El Fenix, Mi Cocina, the Mansion on Turtle Creek, and the frozen margarita. On average, Dallasites eat out about four times every week, which is the third highest rate in the state, behind only Houston and Austin, and Dallas has more restaurants per capita than New York City.

Dallas is the center of the North Texas region's art scene. Some areas known especially for the local art and culture include:

The Arts District of downtown is home to several arts venues, both existing and proposed. Notable venues in the district include the Dallas Museum of Art, the Morton H. Meyerson Symphony Center, The Trammell & Margaret Crow Collection of Asian Art and the Nasher Sculpture Center. In 2009, the AT&T Performing Arts Center was completed, which includes the Margot and Bill Winspear Opera House, the Dee and Charles Wyly Theatre, the Annette Strauss Artists Square, and the Elaine D. and Charles A. Sammons Park. Construction of the City Performance Hall was scheduled for completion in September 2012. The Arts District is also home to Dallas Independent School District's Booker T. Washington High School for the Performing and Visual Arts.

The Majestic Theatre is a historic theater in the City Center District that has been restored for use as a performing arts facility. 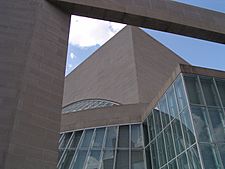 The Morton H. Meyerson Symphony Center in the Arts District.

Deep Ellum originally became popular during the 1920s and 1930s as the prime jazz and blues hotspot in the south. Artists such as Blind Lemon Jefferson, Robert Johnson, Huddie "Lead Belly" Ledbetter, and Bessie Smith played in original Deep Ellum clubs like The Harlem and The Palace. Today, Deep Ellum is home to hundreds of artists who live in lofts and operate in studios throughout the district alongside bars, pubs, and concert venues. One major art infusion in the area is the city's lax stance on graffiti, and thus several public ways including tunnels, sides of buildings, sidewalks, and streets are covered in murals.

The Cedars is home to a growing population of studio artists and an expanding host of entertainment venues as well. The area's art scene began to grow in the early 2000s with the opening of Southside on Lamar, a Sears warehouse converted into lofts, studios, and retail. Current attractions include Gilley's Dallas and Poor David's Pub. Entrepreneur Mark Cuban purchased land in the area near Cedars Station, and locals speculate that he is planning an entertainment complex.

The Bishop Arts District in Oak Cliff is home to a growing number of studio artists living in converted warehouses. Walls of buildings along alleyways and streets are painted with murals and the surrounding district is home to many eclectic restaurants and shops. 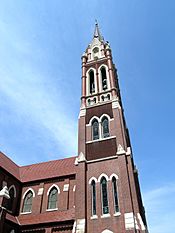 There is a large Protestant Christian influence in the Dallas community and the city is deep within the Bible Belt—Methodist and Baptist churches are prominent in many neighborhoods and anchor the city's two major private universities. The Cathedral of Hope, an LGBT Protestant church, is the largest congregation of its kind in the world.

The Catholic church is also a significant organization in the community—it operates a major university in Irving and its Cathedral Santuario de Guadalupe in the Arts District oversees the second-largest membership in the United States. Dallas is also home to three Eastern Orthodox Christian churches. 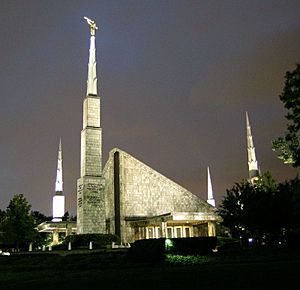 The city is also home to a sizable LDS community. The Church of Jesus Christ of Latter-day Saints has fifteen stakes throughout Dallas and surrounding suburbs.

Dallas has a large Jewish community, many of whom reside in eastern and northern Dallas. Temple Emanu-El, one of the largest synagogues in the South and Southwest, was founded in 1873. The community is led by Rabbi David E. Stern. See the History of the Jews in Dallas, Texas.

Dallas' most significant Muslim community lies in the city's northern and northeastern suburbs, and a strong Hindu community exists in Irving and other northwestern suburbs. 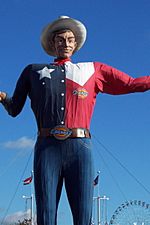 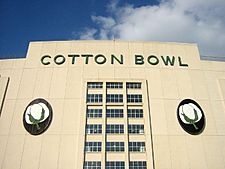 The most notable event held in Dallas is the State Fair of Texas, held annually at Fair Park since 1886. The fair is a massive event for the state of Texas and brings an estimated US$350 million to the city's economy annually. The Red River Shootout (UT-OU) game is held at the Cotton Bowl each year, during the fair's run. 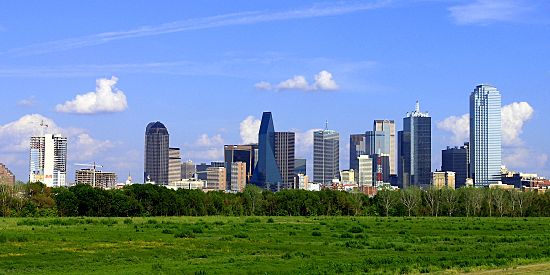 Dallas skyline from a levee along the Trinity River

All content from Kiddle encyclopedia articles (including the article images and facts) can be freely used under Attribution-ShareAlike license, unless stated otherwise. Cite this article:
Culture of Dallas Facts for Kids. Kiddle Encyclopedia.