Death and funeral of Margaret Thatcher facts for kids 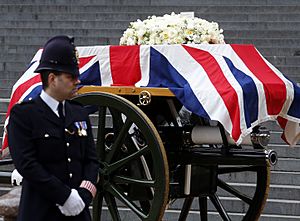 Margaret Thatcher was the Prime Minister of the United Kingdom from 1979 to 1990. She died of a stroke in London on 8 April 2013. She was aged 87. A ceremonial funeral was held on 17 April. It included a formal procession and then a service at St Paul's Cathedral. Her body was cremated. Her ashes were buried next to those of her husband Denis Thatcher at the Royal Hospital Chelsea in London on 28 September 2013. This was what she had wanted. She had refused a state funeral.

At the event, the crowds were peaceful. Thousands of supporters cheered and applauded. A few hundred people came to protest at Ludgate Circus, with other protesters scattered along the route. Police reported only one incident, and no arrests.

All content from Kiddle encyclopedia articles (including the article images and facts) can be freely used under Attribution-ShareAlike license, unless stated otherwise. Cite this article:
Death and funeral of Margaret Thatcher Facts for Kids. Kiddle Encyclopedia.