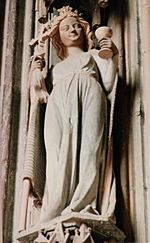 Ecclesia, holding vexillum and chalice, stands across from Synagogue at a portal to Freiburg Münster

Ecclesia (or Ekklesia) in Christian theology means both: a particular body of faithful people, and the whole body of the faithful. Latin ecclesia, from Greek ekklesia, where the word is a compound of two segments: "ek", a preposition meaning "out of", and a verb, "kaleo", signifying "to call" - together, literally, "to call out". That usage soon disappeared and was replaced with "assembly, congregation, council", or "convocation".

The Christian family, the most basic unit of Church life, is sometimes called the domestic Church.

Finally, 'The Church' may sometimes be used, especially in Catholic theology, to speak of those who exercise the office of teaching and ruling the faithful, the Ecclesia Docens, or again (more rarely) the governed as distinguished from their pastors, the Ecclesia Discens.

All content from Kiddle encyclopedia articles (including the article images and facts) can be freely used under Attribution-ShareAlike license, unless stated otherwise. Cite this article:
Ecclesia (Church) Facts for Kids. Kiddle Encyclopedia.