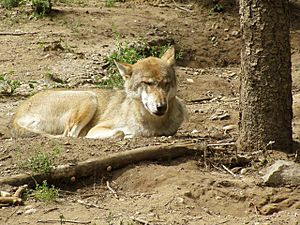 The Eurasian Wolf (Canis lupus lupus) is a subspecies of the Grey Wolf (Canis lupus). It is also known as the Common Wolf, European Wolf, Carpathian Wolf, Steppes Wolf, Tibetan Wolf and Chinese Wolf. It originally lived in most of Eurasia, with a southern limit of the Himalayas in the Hindu Kush Range. 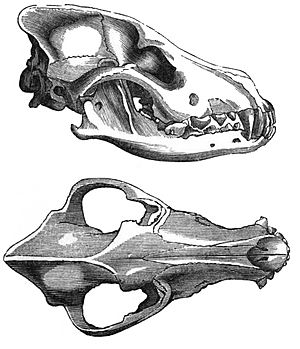 Skull of a European wolf

In describing North American wolves, John Richardson used European wolves as a basis for comparison, summarising the differences between the two forms as so:

The European wolf's head is narrower, and tapers gradually to form the nose, which is produced on the same plane with the forehead. Its ears are higher and somewhat nearer to each other; their length exceeds the distance between the auditory opening and the eye. Its loins are more slender, its legs longer, feet narrower, and its tail is more thinly clothed with fur. The shorter ears, broader forehead, and thicker muzzle of the American Wolf, with the bushiness of the hair behind the cheek, give it a physiognomy more like the social visage of an Esquimaux dog than the sneaking aspect of a European Wolf.

The size of Eurasian wolves is subject to geographic variation, with animals in Russia and Scandinavia being larger and bulkier than those residing in Western Europe, having been compared by Theodore Roosevelt to the large wolves of north-western Montana and Washington. Adults from Russia measure 105–160 centimetres (41–63 in) in length, 80–85 centimetres (31–33 in) in shoulder height, and weigh on average 32–50 kilograms (71–110 lb), with a maximum weight of 69–80 kilograms (152–176 lb). The largest on record was killed after World War II in the Kobelyakski Area of the Poltavskij Region in the Ukrainian SSR, and weighed 86 kilograms (190 lb). Larger weights of 92–96 kilograms (203–212 lb) have been reported in Ukraine, though the circumstances under which these latter animals were weighed are not known. Although similar in size to central Russian wolves, Swedish and Norwegian wolves tend to be more heavily built with deeper shoulders. One wolf killed in Romania was recorded to have weighed 72 kilograms (159 lb). In Italian wolves, excepting the tail, body length ranges between 110–148 cm, while shoulder height is 50–70 cm. Males weigh between 25–35 kilograms (55–77 lb) and rarely 45 kilograms (99 lb). The now extinct British wolves are known to have reached similar sizes to Arctic wolves.

The extermination of Northern Europe's wolves first became an organized effort during the Middle Ages, and continued until the late 1800s. In England, wolf persecution was enforced by legislation, and the last wolf was killed in the early sixteenth century during the reign of Henry VII. Wolves survived longer in Scotland, where they sheltered in vast tracts of forest, which were subsequently burned down. Wolves managed to survive in the forests of Braemar and Sutherland until 1684. The extirpation of wolves in Ireland followed a similar course, with the last wolf believed to have been killed in 1786. A wolf bounty was introduced in Sweden in 1647, after the extermination of moose and reindeer forced wolves to feed on livestock. The Sami extirpated wolves in northern Sweden in organized drives. By 1960, few wolves remained in Sweden, due to the use of snowmobiles in hunting them, with the last specimen being killed in 1966. The grey wolf was exterminated in Denmark in 1772 and Norway's last wolf was killed in 1973. The species was almost wiped out in 20th century Finland, despite regular dispersals from Russia. The grey wolf was present only in the eastern and northern parts of Finland by 1900, though its numbers increased after World War II. Although the Finnish wolf population rose by 2005 to approximately 250 individuals, by 2013 their numbers had again declined to the mid-1990s figure of around 140. This was despite government measures to keep breeding numbers viable. At the beginning of 2016 the wolf population was approximately 300 - 350 individuals.

In Central Europe, wolves were dramatically reduced in number during the early nineteenth century, due to organized hunts and reductions in ungulate populations. In Bavaria, the last wolf was killed in 1847, and had disappeared from the Rhine regions by 1899 and largely disappeared in Switzerland before the end of the nineteenth century. In 1934, Nazi Germany became the first state in modern history to place the wolf under protection, though the species was already extirpated in Germany at this point. The last free-living wolf to be killed on the soil of present-day Germany before 1945 was the so-called "Tiger of Sabrodt", which was shot near Hoyerswerda, Lusatia (then Lower Silesia) in 1904. Today, wolves have returned to the area.

Wolf hunting in France was first institutionalized by Charlemagne between 800–813, when he established the louveterie, a special corps of wolf hunters. The louveterie was abolished after the French Revolution in 1789, but was re-established in 1814. In 1883, up to 1,386 wolves were killed, with many more by poison. 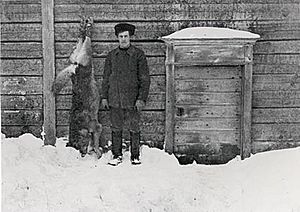 In Eastern Europe, wolves were never fully exterminated, due to the area's contiguity with Asia and its large forested areas. However, Eastern European wolf populations were reduced to very low numbers by the late nineteenth century. Wolves were extirpated in Upper Hungary during the first decade of the twentieth century and, by the mid-twentieth century, could be found only in a few forested areas in eastern Poland. Wolves in the eastern Balkans benefitted from the region's contiguity with the former Soviet Union and large areas of plains, mountains and farmlands. Wolves in Hungary occurred in only half the country around the start of the 20th century, and were largely restricted to the Carpathian Basin. Wolf populations in Romania remained largely substantial, with an average of 2,800 wolves being killed annually out of a population of 4,600 from 1955–1965. An all-time low was reached in 1967, when the population was reduced to 1,550 animals. The extermination of wolves in Bulgaria was relatively recent, as a previous population of about 1,000 animals in 1955 was reduced to about 100–200 in 1964. In Greece, the species disappeared from the southern Peloponnese in 1930. Despite periods of intense hunting during the eighteenth century, wolves never disappeared in the western Balkans, from Albania to the former Yugoslavia. Organized persecution of wolves began in Yugoslavia in 1923, with the setting up of the Wolf Extermination Committee in Kocevje, Slovenia. The committee was successful in reducing wolf numbers in the Dinaric Alps.

The grey wolf's range in the Soviet Union encompassed nearly the entire territory of the country, being absent only on the Solovetsky Islands, Franz-Josef Land, Severnaya Zemlya, and the Karagin, Commander and Shantar Islands. The species was exterminated twice in Crimea, once after the Russian Civil War, and again after World War II. Following the two world wars, Soviet wolf populations peaked twice. 30,000 wolves were harvested annually out of a population of 200,000 during the 1940s, with 40,000–50,000 harvested during peak years. Soviet wolf populations reached a low around 1970, disappearing over much of European Russia. 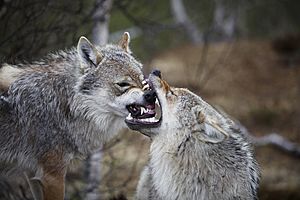 In 1978, wolves began recolonising central Sweden after a twelve-year absence, and have since expanded into southern Norway. As of 2005, the total number of Swedish and Norwegian wolves is estimated to be at least one hundred, including eleven breeding pairs. The grey wolf is fully protected in Sweden and partially controlled in Norway. The Scandinavian wolf populations owe their continued existence to neighbouring Finland's contiguity with the Republic of Karelia, which houses a large population of wolves. Wolves in Finland are protected throughout the country, and can be hunted only with specific permission. The decline in the moose populations has reduced the wolf's food supply. Since 2011, Netherlands, Belgium and Denmark have also reported wolf sightings presumably by natural migration from adjacent countries. Nonetheless, they are still considered to be extinct in these regions. 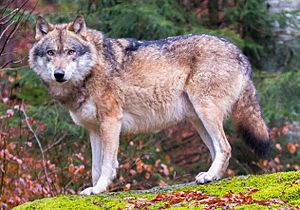 Wolf populations in Poland have increased to about 800–900 individuals since being classified as a game species in 1976. Poland plays a fundamental role in providing routes of expansion into neighbouring Central European countries. In the east, its range overlaps with populations in Lithuania, Belarus, Ukraine, and Slovakia. A population in western Poland expanded into eastern Germany and in 2000 the first pups were born on German territory. In 2012, an estimated 14 wolf packs were living in Germany (mostly in the east) and a pack with pups has been sighted within 15 miles of Berlin. The grey wolf is protected in Slovakia, though an exception is made for wolves killing livestock. A few Slovakian wolves disperse into the Czech Republic, where they are afforded full protection. Wolves in Slovakia, Ukraine and Croatia may disperse into Hungary, where the lack of cover hinders the buildup of an autonomous population. Although wolves have special status in Hungary, they may be hunted with a year-round permit if they cause problems.

Romania has a large population of wolves, numbering 2500 animals. The wolf has been a protected animal in Romania since 1996, although the law is not enforced. The number of wolves in Albania and Macedonia is largely unknown, despite the importance the two countries have in linking wolf populations from Greece to those of Bosnia and Herzegovina and Croatia. Although protected, many wolves are illegally killed in Greece annually, and their future is uncertain. Wolf numbers have declined in Bosnia and Herzegovina since 1986, while the species is fully protected in neighbouring Croatia and Slovenia.

Wolf populations throughout Northern and Central Asia are largely unknown, but are estimated in the hundreds of thousands based on annual harvests. Since the fall of the Soviet Union, continent-wide extermination of wolves has ceased, and wolf populations have increased to about 25,000–30,000 animals throughout the former Soviet Union, an increase of about 150%.

The majority of pre-Christian wolf-related traditions in Eurasia were rooted in Hittite mythology, with wolves featuring prominently in Indo-European cultures, sometimes as deity figures. The wolf was held in high esteem by the Dacians, whose name was derived from the Gaulish Daoi, meaning "wolf people". The wolf was viewed as the lord of all animals, and as the only effective power against evil. The Gauls associated wolves with Belenus, the god of light, whose name may have been derived from the Breton bleiz, which itself means 'wolf'. Limping wolf was thought to be one of the manifestations of the Slavic sun god Dažbog. Also, the ancient Greeks associated wolves with their own sun god Apollo.

All content from Kiddle encyclopedia articles (including the article images and facts) can be freely used under Attribution-ShareAlike license, unless stated otherwise. Cite this article:
Eurasian Wolf Facts for Kids. Kiddle Encyclopedia.