Ilkley is a spa town and civil parish in West Yorkshire, in Northern England. Historically part of the West Riding of Yorkshire, Ilkley civil parish includes the adjacent village of Ben Rhydding and is a ward within the metropolitan borough of the City of Bradford. Approximately 12 miles (19 km) north of Bradford and 17 miles (27 km) northwest of Leeds, the town lies mainly on the south bank of the River Wharfe in Wharfedale, one of the Yorkshire Dales.

Ilkley's spa town heritage and surrounding countryside make tourism an important local industry. The town centre is characterised by Victorian architecture, wide streets and floral displays. Ilkley Moor, to the south of the town, is the subject of a folk song, often described as the unofficial anthem of Yorkshire, "On Ilkla Moor Baht 'at". The song's words are written in Yorkshire dialect, its title translated as "On Ilkley Moor without a hat." 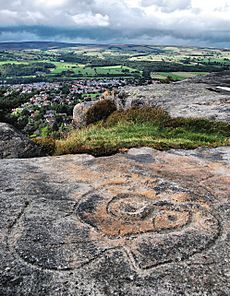 The earliest evidence of habitation in the Ilkley area is from flint arrowheads or microliths, dating to the Mesolithic period, from about 11,000 BC onwards. The area around Ilkley has been continuously settled since at least the early Bronze Age, around 1800 BC; more than 250 cup and ring marks, and a curved swastika carving dating to the period have been found on rock outcrops, and archaeological remains of dwellings are found on Ilkley Moor. A druidical stone circle, the Twelve Apostles Stone Circle, was constructed 2,000 years ago. Serious interest in the rock art of Ilkley began after the publication in 1879 of the "Prehistoric Rock Sculptures of Ilkley" by Romilly Allen in the Journal of the British Archaeological Association.

The remains of a Roman fort occupy a site near the town centre. Some authorities believe it is Olicana, dating to 79 AD, but the identification is not settled. A number of Roman altars have been discovered from the reigns of Antoninus Pius (138 to 161), and Septimius Severus and his son Caracalla (211 to 217).

Three Anglo-Saxon crosses from the 8th century that stood in the churchyard of All Saints' Church have been moved inside to prevent erosion. The church site, as a centre for Christian worship, extends to 627 AD, and the present mainly Victorian-era church incorporates medieval elements.

The Domesday Book, of 1086, records Ilkley (Ilecliue/Illecliue/Illiclei/Illicleia) as being in the possession of William de Percy 1st Baron Percy. The land was acquired by the Middelton family of Myddelton Lodge, from about a century after the time of William the Conqueror. The family lost possession through a series of land sales and mortgage repossessions over a period of about a hundred years from the early 19th century. The agents of William Middelton (1815–1885) were responsible for the design of the new town of Ilkley to replace the village which had stood there before.

In the 17th and 18th centuries the town gained a reputation for the efficacy of its water. In the 19th century it became established as a fashionable spa town, with the construction of Ben Rhydding Hydro, a hydropathic establishment at Wheatley, a mile to the east, between 1843 and 1844. Charles Darwin underwent hydropathic treatment at Wells House when his book On the Origin of Species was published on 24 November 1859, whilst staying with his family at North View House (now Hillside Court). Tourists flocked to 'take the waters' and bathe in the cold-water spring. Wheatley was renamed Ben Rhydding after the Hydro, which has been demolished. 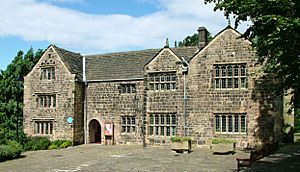 Development based on the Hydro movement, and on the establishment of convalescent homes and hospitals, was accelerated in August 1865 by the construction of the Otley and Ilkley Joint Railway, which linked to the Leeds and Bradford Railway and the North Eastern Railway. The Midland Railway built a connection to Skipton via Bolton Abbey in May 1888.

Other Victorian visitors to the town include Madame Tussaud. The only remaining hydro building is the white cottage known as White Wells House. The cottage can be seen and visited on the edge of the moor overlooking the town. 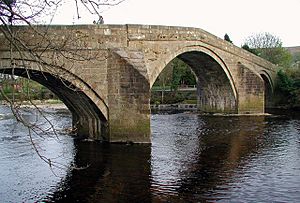 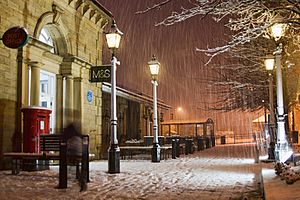 Early winter snowfall on Railway Road in the town centre

The town is within the travel-to-work radius of Leeds and Bradford. Leeds is 18 miles (29 km) away and Bradford 15.6 miles (25.1 km) by road, with a railway connection offering about 35 trains to each destination per day from Ilkley railway station. The railway, before the Beeching axe, also connected to Addingham, Bolton Abbey and Skipton to the west, and to Otley, Pool-in-Wharfedale, meeting the main Leeds to Harrogate line at Arthington.

The town partially straddles the River Wharfe in a valley, rising from the river at 230 feet (70 m) to 650 feet (200 m) above sea level, up Ilkley Moor (a bracken and heather covered moorland, with rocky outcrops, to the south) and to 540 feet (160 m) across Middleton Woods in the north. The river runs through the northern extent of the town from west to east, and is crossed by four bridges, in order: a 16th century three-arched stone bridge, now closed to road traffic; a 19th century single-span wrought-iron bridge; a suspension bridge for foot traffic only (a set of concrete stepping stones) and a prefabricated steel arched box-girder bridge. The river is prone to flooding the sports fields (and a few houses) that occupy the watermeadows. 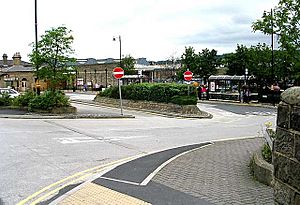 Ilkley lies on the A65 road, which runs between Leeds and Kendal. The nearest substantial motorways are the M62 at Bradford, and the M1 at Leeds, and the A1(M) at Wetherby. The civil parish is served by two railway stations: Ilkley terminus and Ben Rhydding. These are linked by the Wharfedale Line upon which trains run between Ilkley and Leeds/Bradford Forster Square stations. 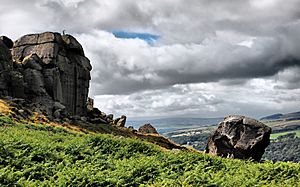 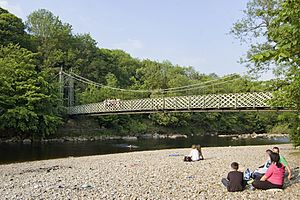 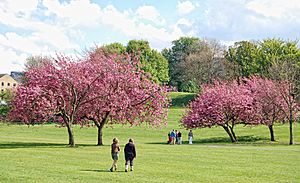 Ilkley town centre is a tourist attraction with a high number of small independent shops. Of particular note is Lishman's of Ilkley, an award-winning butcher shop whose owner, David Lishman, became one of Rick Stein's superheroes in 2003. Ilkley is one of five towns to feature a Bettys tearoom and is home to the Michelin-starred Box Tree restaurant where Marco Pierre White trained. In 1991 Ilkley won the Entente Florale and in 1990 and 2004 the Britain in Bloom contest in the category of 'Town'. In 2006 Ilkley became a Fairtrade Town.

The Manor House, one of the town's oldest buildings, houses a museum and art gallery. The museum contains prehistoric artefacts and documents the Roman fort of Olicana – remains of which are exposed at the back of the building – as well as the rise of Ilkley as a Victorian spa town. Ilkley Toy Museum has a collection of toys dating from 350 BC and a collection of English wooden dolls. 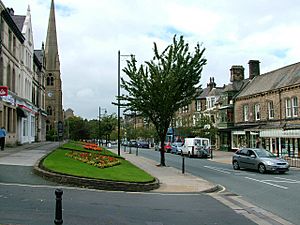 Ilkley's rural surroundings attract walkers and cyclists to the area. The landmark Cow and Calf rocks, which overlook the town on Ilkley Moor, consist of a large outcrop, which allegedly imitates a cow, and a boulder, which imitates a calf. The site is also visited for its rock climbing routes. The Old Bridge just outside the town centre is the official start to the Dales Way, an 84-mile (135 km) walk through the dales to Bowness-on-Windermere in the Lake District.

Darwin Gardens, to the south of the town, is a Millennium Green which commemorates the town's links with English naturalist Charles Darwin. The Green features a maze, whose design was influenced by the Swastika Stone carving, and includes monuments with an evolutionary theme.

Ilkley is home to the largest and oldest literary festival in the North of England, the Ilkley Literature Festival. The 1984 British comedy film A Private Function, written by Alan Bennett, was filmed in Ilkley and Ben Rhydding. The town was also one of the locations used for the 2003 British comedy film Calendar Girls. The Ilkley Gazette is the town's weekly newspaper.

A complementary medicine festival has been held in Ilkley since 1988 and is currently held twice a year, attracting 2,000 visitors.

Since 1969 Ilkley has been twinned with Coutances in France. 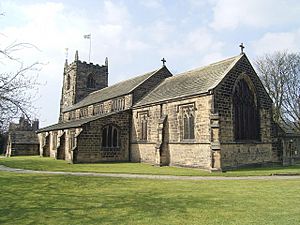 According to Census 2001, 75.64% of Ilkley residents are Christian. The second largest group are people with no religion who account for 15.53% of residents. 7.48% did not state their religion and 1.34% fall into a variety of other religious groups.

Ilkley's medieval parish church All Saints', largely reconstructed in the Victorian era, houses artefacts of the site's ancient Christian heritage including three Saxon crosses and today operates within the Anglican Communion. An expanding congregation in the 19th century triggered plans in 1873 for a second church which became St Margaret's Church, designed by Richard Norman Shaw and completed in 1879. Worship at the church is conducted in the Anglo-Catholic tradition and in 2005 was led by David Hope, Baron Hope of Thornes. When the Archbishop of York resigned he became vicar at Ilkley until his retirement in 2006.

All content from Kiddle encyclopedia articles (including the article images and facts) can be freely used under Attribution-ShareAlike license, unless stated otherwise. Cite this article:
Ilkley Facts for Kids. Kiddle Encyclopedia.