Federal legislation has identified I-95 through Connecticut as High Priority Corridor 65. A long-term multibillion-dollar program to upgrade the entire length of I-95 through Connecticut has been underway since the mid-1990s and is expected to continue through at least 2020. Several miles of the Connecticut Turnpike through Bridgeport were recently widened and brought up to Interstate standards. Work has shifted to reconstructing and widening 12 miles (19 km) of I-95 through New Haven, which includes replacing the Pearl Harbor Memorial Bridge. Environmental studies for reconstructing and widening 60 miles (97 km) of I-95 from New Haven to the Rhode Island state line are also progressing.

I-16 in Savannah
South Carolina

I-76 in Philadelphia
Temporary Gap in route 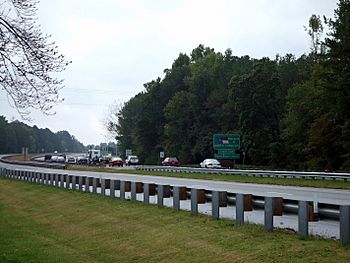