Jämtland is a historical province in the centre of Sweden in northern Europe. It borders Härjedalen and Medelpad to the south, Ångermanland to the east, Lapland to the north and Trøndelag and Norway to the west. Jämtland covers an area of 34,009 square kilometres, 8.3% of Sweden's total area and is the second largest province in Sweden. It has a population of 115,331, the majority of whom live in the area surrounding lake Storsjön. Östersund is Jämtland's only city and is the 24th most populous city in Sweden.

Jämtland was originally a self-governing peasant republic, its own nation with its own law, currency and parliament. However, Jämtland lacked a public administration and was thus best regarded as an anarchy, in its true meaning. Jämtland was conquered by Norway in 1178 and stayed Norwegian for over 450 years until it was ceded to Sweden in 1645. The province has since been Swedish for roughly 370 years, though the population did not gain Swedish citizenship until 1699.

The current Swedish King Carl XVI Gustaf became the Duke of Jämtland after his Christening, he held that title until his ascension to the Swedish throne in 1973.

Historically, socially and politically Jämtland has been a special territory between Norway and Sweden. This in itself is symbolized in the province's coat of arms where Jämtland, the silver moose, is threatened from the east and from the west. During the unrest period in Jämtland's history (1563–1677) it shifted alignment between the two states no less than 13 times. 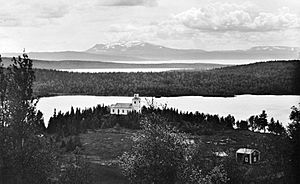 Some finds from the time before humans have been discovered in Jämtland, most notably the remains from a woolly mammoth in Pilgrimstad.

The first humans came to Jämtland from the west across the Keel approximately 7000-6000 BC, after the last ice age. The climate was at the time much warmer than today and trees such as oak were growing at the top of today's mountains. Several thousand archaeological remains have been located in the province, predominantly near old camp-sites, beaches and lakes.

The oldest settlement found is located at Foskvattnet, not far way from the so-called Fosna culture, this settlement has been dated to 6600 BC. In Jämtland the moose was the dominant prey, which is clearly shown on petroglyphs and rock paintings. Jämtland has over 20,000 documented ancient monuments, the oldest one being an arrowhead found in Åflo near Kaxås in Offerdal parish possibly older than 8,000 years, which would make it one of the oldest stone age finds in all of Sweden.

Rock paintings found in Jämtland often collocates with various trapping pits and well over 10,000 pits used for hunting have been located, which is much more than any other Scandinavian region. Trapping or hunting pits were placed in areas in close proximity of the hunted animal in question, usually in known places where the animals moved. Because of this there are several places where pits have been dug separately in lines stretching on for miles throughout the landscape. Several place names in Jämtland still display the significance these pits had to the tribes.

A Jamtish Neolithic culture emerged during late Roman Iron Age, although the hunter-gatherers had come in contact with this lifestyle long before they settled down themselves. Since the hunts were rich and successful in Jämtland, it took a long time before a change occurred.

The Neolithic revolution happened quickly once initiated since the Trønders had been farmers for a long time and some of the Jamts had already begun herding. The Jamtish farmers grew first and foremost barley, although palynological study also show hemp. At the end of the 4th century a fortress, Mjälleborgen, was established on Frösön to control the iron production and trade that took place. The western influence from Trøndelag through Jämtland to Norrland was at the time extensive.

During the viking age, the settlement in the province grew. When a climate change (which later resulted in the Medieval Warm Period) took place, the warmer climate made the agriculture flourish, the stock-raising and the special inland Scandinavian herding or "livestock drifting", buföring, was developed further. This is especially true for the southern parts of Jämtland when the so-called "fell cow" was introduced. The hunt for moose and other wild animals increased during this period.

Religiously the Jamts had abandoned the indigenous Germanic tribal religion in favour of the Christian faith. In religious practice, Jämtland was dominated by the older Vanir gods (Freyr, Njord, Ullr etc.), although the Æsirs were also worshiped. 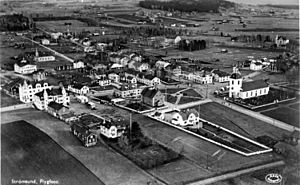 The town Strömsund in northern Jämtland in the 1930s

The culture of Jämtland has been greatly affected by the fact that Jämtland's never had an upper class, since the population have mostly consisted of free sovereign farmers with wide connections and a strong regional identity. This has been the case for many generations. Jämtland started out free and remained autonomous during its time as a Norwegian dependency. Because of Jämtland's historical background the local culture shows great similarities with the Norwegian farm culture.

Today, the history of Jämtland is exhibited in the regional museum Jamtli in Östersund. The museum consists of an open-air section with historical buildings, as well as an indoor museum which houses exhibitions about the region's cultural history, from the stone age until modern times. Local history has been very popular in Jämtland for over 100 years, due to the extensive cultural home ground movement that emerged in the late 19th and early 20th century. The movement founded Jamtli to preserve the cultural heritage.

All content from Kiddle encyclopedia articles (including the article images and facts) can be freely used under Attribution-ShareAlike license, unless stated otherwise. Cite this article:
Jämtland Facts for Kids. Kiddle Encyclopedia.